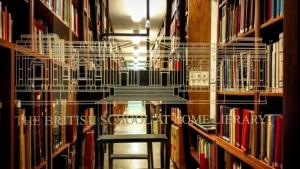 The David D. and Rosemary H. Coffin Fellowship for Travel in Classical Lands is awarded to secondary level instructors (grades 9–12) for the purpose of attending an educational program or undertaking individual research in classical lands. The 2016 recipient of the award was Tyler Nye, of Avon High School, Avon, CT. He used his award to attend the “City of Rome” postgraduate course offered by the British School at Rome.

When Varro published his Antiquitates, Cicero commented “we were like strangers in our own city (in nostra urbe pereginantes), visitors who had lost their way. It was your books [Varro’s] that, as it were, brought us back home, so that at last we could recognize who we were, and where we were.” Cicero’s statement draws attention to the fact that a retrospective and introspective study by the Romans of their own culture was essential to the formulation of Roman identity. Rome’s history dwells below the visible surface: every Renaissance palazzo is built upon a Medieval structure, which was in turn built upon a Late Antique foundation, having been constructed atop an Imperial edifice whose groundwork dates to the Republican Era and, in some cases, pre-historic remains below that. My studies in the British School at Rome’s “City of Rome” postgraduate course focused on conceptualizing and understanding these traces of past human activity in the Eternal City. To do so we studied the literary and archaeological evidence for an existing site, such as the underground grotto discovered on the Palatine Hill in the late 2000s, sometimes conducting site visits, and discussed various scholarly theories (see here, here and here) about the sites. Sometimes we even discussed our own theories. It was a fellow student on the “City of Rome” course who proposed (W. Ford, Letters to the Editor, The Times, 18 March 2008; paywall) the Palatine grotto was in fact a storm bunker built for Augustus (Suet. Aug. 29, 90), a theory cited and published by Coarelli himself.

Our studies were not restricted only to sites or monuments visible in Rome today, though; relying heavily on the research of past scholars, we also studied sites and monuments no longer extant. Of particular fascination for me has been the Einsiedeln manuscript—an account written by an anonymous monk of the Einsiedeln Abbey in Switzerland who visited Rome around AD 800. The Einseideln manuscript was created as a guide for pilgrims; it describes the monuments which could be seen in Carolingian Rome (many of which no longer stand) and preserves their inscriptions for modern scholars. This manuscript became a significant resource for my final paper, “Titus the Triumphator’s Arch in the Circus Maximus,” in which I examined the evidence for this lost monument of Rome, and conducted a comparative analysis with the Arch of Titus in summa via sacra. The research I conducted for this paper will become an integral part of my curriculum for Stage 29 of the Cambridge Latin Course on Titus’ arch; I especially look forward to reading inscriptions from the Einsiedeln manuscript with my upper level Latin students. I am also eager to share my site photos with students for years to come, pointing out such unique artifacts as a funerary monument embedded in a house near Piazza San Callixto. In the future, I hope to lead study trips to Rome for my students, using my newly acquired expertise to navigate this labyrinthine city with ease. My time at the BSR has taught me that there is no substitute for walking the city as the ancient Romans once did. The full extent to which the BSR summer program has enhanced my teaching remains to be seen.

I wish to express my utmost gratitude to the Society for Classical Studies for their generous financial assistance. With their help, my time in Rome has left me not only with a revived passion for the ancient world, but also with a renewed hunger for future sojourns to the imperial capital. Living in such close proximity to the remnants of the massive civilization that once flourished here was a transformative experience. Moreover, the Coffin Fellowship has proved instrumental for the research and development of my master’s thesis on Sextus Pompey.

I also wish to express my most sincere gratitude to Dr. Robert Coates-Stephens, Director of the “City of Rome” course, and to Dr. Edmund Thomas of Durham University, Balsdon Fellow at the BSR. Finally, I would like to thank Dr. Christopher Smith, Director of the BSR, for his generous hospitality and the world class education received under his directorship.

Tyler received his B.S. in Secondary Education, Classical Studies, and Hispanic Studies from the University of Scranton. He has taught Spanish and Latin at Avon High School in Connecticut. Tyler was awarded a Fulbright grant to attend the summer session at the American School for Classical Studies at Athens. He obtained his M.A. in History and Archaeology of the Greek and Roman World from Cardiff University, specializing in the Roman navy. Whilst at Cardiff, his research proposal on Flavian Rome was accepted by the British School at Rome and funded by the SCS.

07/23/2021
Blog: “Can We Strangle the Muse?”: Carson and Bruno’s The Trojan Women
By Christopher Trinacty, Emma Glen, and Emily Hudson (Oberlin College) Anne Carson’s celebrated adaptations and...
07/12/2021
Blog: Contingent Faculty Series: A Conversation with Daniel Libatique
Our fifth interview in the Contingent Faculty Series is a virtual conversation between Dr. Taylor Coughlan and Dr...
07/06/2021
Blog: Six months in(surrection)
Today marks half a year since insurrectionists stormed the U.S. Capitol, occupied the Senate chamber, violently...
06/28/2021
Dissertation Spotlight: The “Oracular Tale” and the Oracles of the Greeks
Joseph Fontenrose’s The Delphic Oracle (1978) fundamentally reshaped how we think about Greek oracular divination...
06/24/2021
Blog: Ancient Worlds, Modern Communities: Connecting to the Ancient Greeks through Medicine, Sociology, Literature and Philosophy
The Ancient Worlds, Modern Communities initiative (AnWoMoCo), launched by the SCS in 2019 as the Classics...
END_OF_DOCUMENT_TOKEN_TO_BE_REPLACED