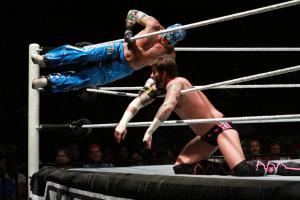 Milman Parry’s theory that the Homeric poems are the result of oral-formulaic composition, is central to the study of ancient epic. It can also be difficult to explain to students or non-Classicist friends, since the Iliad and Odyssey are now consumed primarily as books, not oral poems. Most oral traditions are at the tail end of their existence and most members of contemporary, literate societies have little experience with them. There is little to be done about the first of these issues, but we can address the second. While we may not have access to a significant body of oral composition, there are art forms created in the moment of performance that can be quite helpful in explaining how the Homeric epics were created and consumed by audiences. The most notable of these is professional wrestling.

Jazz, battle rap, and video games, among other genres, have been analyzed within the framework of Parrian oral poetics, but professional wrestling contains specific parallels with Homeric epic that make it particularly useful. They both depend on the use of formulaic elements (language in one case, “moves” in the other); they also both go to some lengths to disguise their performative nature. Both tell self-contained stories—sometimes part of a larger story arc—while also capitalizing on the audience’s knowledge of traditional characters, themes, and plots. It is their similar approaches to storytelling, characterized by multiformity in particular, that makes it possible to use the former to help us understand elements of the latter.

“Multiformity” in this context means that there are multiple distinct, yet authoritative, versions of the same event in a narrative, as opposed to the single canonical account. While we can no longer watch ancient Greek rhapsodes tell and retell episodes of the Iliad and Odyssey, we can see multiformity up close as part of a signature element of the wrestling business: the house show.

Every wrestling house show is different. A pair of wrestlers may wrestle the “same” match with the same stakes and outcome on a dozen consecutive performances. But, each one will in fact contain a different progression of maneuvers determined by the performers during the actual match. Like individual performances of a Homeric epic, the stories that these house shows tell rarely alter the larger narrative within which they are embedded. However, the stories being told in the house-show ring are still dependent on a larger narrative, and audiences must still treat them as if they can change the larger storyline. Even though titles rarely change hands at these events, a championship match only works if both performer and audience act as if they might. Furthermore, because these house shows are largely isolated from the long-term storyline developed by the writers and promoters, performers can experiment with new maneuvers, characters, and performative elements that may later be brought forward in the televised events that do have a permanent impact on the overarching narrative.

The lessons of wrestling house shows, particularly how they function as a laboratory for new ideas and how audience and performer work together to give even minor shows the illusion of importance and authority, can be applied directly to our understanding and teaching of ancient epic. Like wrestlers, Greek rhapsodes would have combined local, private performances with major events such as the Panathenaia. It is possible, likely even, that poets would have varied their recitations during private performances tailoring it to their audience, or experimenting with new imagery. Successful elements from smaller shows might subsequently be performed at larger events, potentially influencing the larger epic tradition, in the same manner a wrestler whose new move gets a big reaction might be folded into a larger televised event. The multiformity evident in the extant Homeric tradition should, therefore, be seen not only as differentiation, but experimentation. The inevitable variation from performance to performance not only provided the audience with multiple versions of the same events, but gave poets a chance to see which of these versions was most successful. Organically created scenes, descriptions, and events moved from nonexistent, to possible, to canonical.

Professional wrestling provides a mode of storytelling that mimics epic’s mix of contained and long-form narrative. It is a medium that approximates the way that the Greeks would have experienced epic, rather than the fixed poems that we engage with. Through professional wrestling, we can see, and show our students, how the structural and narrative elements Milman Parry identified in Homeric Epic developed.

William Duffy is Faculty Fellow in Faculty Development at St. Philip's College. His work on the reception of heroic myth in the ancient and modern world has appeared in Acta Classica, Classical Philology, Classical World, Oral Tradition, and The International Journal of Comic Art. His co-edited volume, Ancient Women in Modern Media, is available from Cambridge Scholars Publishing. wduffy@alamo.edu