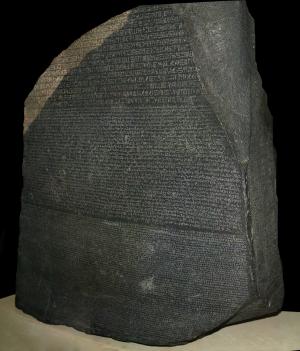 Arrival has gotten serious buzz in academic circles, and for good reason. The premise of the film is the idea that the language you speak shapes the kind of thoughts you can have. Formally, that idea is called the “linguistic relativity hypothesis” or Sapir-Whorf Hypothesis, and the film thus brings one of the more controversial and intriguing theories in the scholarly study of language before the popular imagination. It is an idea that could fundamentally change what we think we know about the ancient world.

In the film Amy Adams portrays linguistics professor Louise Banks, a demoralized expert in phonemic analysis, tasked with deciphering an alien language. The Heptapods’ language possesses a peculiar written form; they “write” a single splotchy circle, which can convey anything from a simple idea like a name to more complex combinations of concepts (what we might think of as a sentence). As Dr. Banks deciphers more and more of this “circular” writing system, she begins to perceive and experience time in a wholly new way.

What the theatrical audience was led to believe are Dr. Banks’ memories of her terminally ill daughter turn out to be the recollections of her future self. The resolution of the film comes about through Dr. Banks’ newfound ability to project her consciousness across time, effectively enabling her present self to share knowledge with its future counterpart. Such a feat is inconceivable to speakers of English, which imposes a strictly linear and unidirectional understanding of time, but possible under a non-linear conception of time like the one captured by the Heptapod language.

If the Heptapod language and concept of time are meant to be “utterly foreign” to English speakers, as Margaret Rhodes argued in Wired, Greek and Latin are perhaps almost as foreign when it comes to temporal sequences. Every beginning Latin student knows that it is the inflectional shape of the words—not their linear ordering—that establishes syntactic relations and meaning in a sentence like Marcellus Praenestinam amat (CIL IV, 7679). The earliest Latin inscriptions reveal a complete indifference to the directionality of writing, and the winding back and forth of Greek boustrophedon texts is well-known. What’s more, Greek and Latin speakers appear to have possessed their own “circular” understanding of time. This is implied by expressions like Homer’s ἂψ περιτελλομένου ἔτεος, Hesiod’s περιπλομένων ἐνιαυτῶν, Vergil’s volvendis mensibus (Aen. 1.269) and Ovid’s revoluta . . . saecula (Fast. 4.29). Each iteration of temporal events is construed through the metaphorical image of time “turning” or “going” back upon itself. Livy, in fact, refers to the yearly repetition of events as a “circle” turning (3.10.8). From this perspective, Greek and Latin speakers may be almost as alien as Heptopods.

Probably Greeks and Romans did not perceive time non-linearly like Arrival’s Heptapods. Yet they almost certainly experienced time differently than we do – and in ways that correspond to how their languages represent time. Consider that Latin’s vocabulary of time is organized by two metaphorical images. The first is a horizontal metaphor, in which temporal relations before and after are mapped to a horizontal linear axis “in front of” and “in back of”; the second, a vertical metaphor, in which the order of time is plotted along a vertical axis and temporal progression is conceived in terms of “above” and “below,” “higher” and “lower”. These images not only delivered most of Latin speakers’ conventional discussion about time, but also provided a symbolic model structuring their ritualized behaviors and interaction with objects in kinship practice, calendar making, and the visual arts. The monumentalized landscape of Rome itself embodied these figurative associations. Climbing the Palatine or the Capitoline Hills where Romulus’ hut, the arx and other monuments of the city’s earliest history stood, a Latin speaker would have appreciated ‘before is above’ as a feature of the terrain. Similarly, walking from the temple of Mars Ultor through the Forum of Augustus, where statues of the Julian family and of Rome’s summi viri were displayed chronologically, a Latin speaker would have recognized ‘after is behind’ as something literally true of the world.

We would not want to say that Latin’s metaphors limit its speakers’ thought: in fact, they enable reasoning about temporal experience. Still, this language’s distinctive ways of construing time metaphorically goes hand-in-hand with a distinctive way of understanding and being in the world. This should remind us that in our own studies of the ancient world it is important to try to observe the world through Greek and Roman eyes, just as Dr. Banks aims to do with the Heptapods. This means getting at the special ways of thinking reflected in their languages—metaphors in particular, since these provide the most immediate access to concepts that organize the cultures to which they belong. It also means recognizing that it is in the differences between our worldview and theirs that we have the most to learn from the “alien” Greeks and Romans.

William Michael Short is Associate Professor of Classics at The University of Texas at San Antonio. His research extends Lakovian conceptual metaphor theory to anthropology analysis, using patterns of metaphorical expression in Latin to reconstruct the kinds of conceptual ‘folk’ models that organize Roman society’s symbolic expression at large: in a word, its culture william.short@utsa.edu