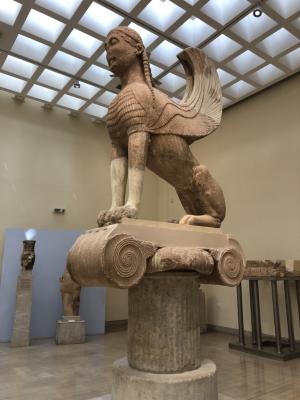 This month, we spotlight the graduate research of Dr. Yoandy Cabrera Ortega, who recently defended his dissertation on the portrayal of human emotions in ancient Greek myths and in modern literature from Spain and Latin America.

My dissertation was an interdisciplinary one, intertwining different approaches and fields such as classical reception, queer studies, affect theory, and Hispanic studies.

The title was “Rage and Desire: Thymotic Impulses in Hispanic Greece” and my advisor is Dr. Hilaire Kallendorf. This study analyzes the differences and similarities among the multiple portrayals of mythological figures as embodiments of human emotions (or “affects” as Freud calls them), especially rage and erotic desire, from Ancient Greece (8th century B.C., with the Homeric poems) to the present. I argue that the fusion of love and rage in Archaic and Classical Greek figures like Achilles and Medea triggers dissent and subversion against any form of external control or manipulation of human behavior (ideological, political, religious, etc.). It means that Achilles, for example, from Homer until today, goes beyond any moral code with his actions and represents non conventional forms of anger and desire. This is something that renowned Latin Americanist critic Alberto Moreiras defines as “Infrapolitics” in Marranismo e inscripción (2016).

My study of literature, theatrical plays, choreographies, and films is quite global, pulling from areas like Spain, Uruguay, Colombia, Mexico, Argentina, Cuba, and the United States. What I have argued is that within Hispanic versions of these classical myths, violence and love have been intimately connected with classical figures in ways that underline their universal iconic nature. In other words? Some emotions transcend space and culture. Moreover, the blend of rage and love as emotional triggers for dissent and subversion, often allow classical literary characters –in both ancient and more contemporary versions– to go beyond any kind of boundaries (geographical, religious, sexual, etc.) to ponder topics common to all humanity. I study how human impulses, embodied by these reimagined classical characters, become driving forces (or “thymotic forces” as Peter Sloterdijk calls them in Rage and Time, 2006) that resist and destabilize any form of behavioral normativity. Certain emotions can subvert the status quo.

Violence and erotic desire are the most prevalent thymotic forces in these artistic and literary works; they also represent universal concepts that connect myth and history, past and present, freedom and control, illegality and laws. The distinctiveness of Medea, Achilles, and Oedipus stems directly from their common connection to these thymotic forces.  I argue that the differences among the multiple versions of the same myths, including their varied reception in the Hispanic World, arise from the different cultural views on rage and erotic desire filtering through all of these depictions. The ways Medea, Achilles, and Oedipus have been read by contemporary audiences also discloses powerful insights from Antiquity until today about what makes us human. For example, the Homeric Achilles returns to fight for a personal and non political reason, looking for vengeance of his dead beloved friend; the Golden Age Achilles by Tirso de Molina (17th century A.D.) represents sexual ambiguities and forms of non conventional loves going against the social standards; and in his novel Aquiles o El guerrillero y el asesino (2016), the Literature Nobel Prize-winner Carlos Fuentes presents a Colombian Achilles whose weakness, femininity, violence, passion, Eros and beauty shows a different kind of hero. Medea undermines the male-dominated heroic code in Euripides, spreads her fury in the form of fire and magic in Los encantos de Medea (1645) by Francisco de Rojas Zorrilla and represents the social and personal conflicts of the Mexican-American and Chicano people in Mojada (2013) by Luis Alfaro. Sexuality, boundaries, taboo and incest in Oedipus are topics discussed by Sofocles in Greece, Alejandro Arboreda in the Spanish 17th century with No hay resitencia a los hados and Law Chavez in New Mexico with his play Señora de la Pinta (2012).

It is increasingly rare to find mythological analyses in academia which endeavor to link together different myths and different periods, especially ones that study their multiple literary renderings from Antiquity up to the present. This study shows how important and relevant it is to trace the possible links among characters, myths, politics, and affects (i.e. emotions) in order to understand the multiple ways in which classical myths and their protagonists have been portrayed throughout the past six centuries in the Hispanic World. This dissertation demonstrates how, despite the differences among the representations of classical myths in the corpus under study, emotions have been the thematic and structural anchor in all the works analyzed.

My dissertation is the starting point for publishing a future volume about the connections between myth, affects and infrapolitics in the ancient and Hispanic worlds. I also plan to publish critical editions of two Spanish Golden Age plays: El Aquiles by Tirso de Molina and El caballero dama by Cristóbal de Monroy y Silva. This is also the beginning of a new research project about the ways Homer’s Iliad has been read in the 21st century in different cultural contexts such as modern Greece, the United States and the Hispanic world.

In my new position as Assistant Professor at Rockford University, I am going to teach both Spanish and Classics. Next semester I will be teaching a class about Hispanic politics and borders through myth. This course will examine and study the different ways that classical myths are related to politics and borders in the contemporary Hispanic world. We will discuss news, poetry, plays, paintings, films and other forms of fiction and popular heritage from different Hispanic cultural contexts such as: Spain, Mexico, Cuba and the Latinx culture in the United States. This way the students will study current political movements in the Hispanic world and analyze how European tradition is reread in our present. I will also teach a class of Greek and Roman mythology where my main goal is to show the students the connections between myth, emotions and the concept of tragedy from Antiquity until today.

Yoandy Cabrera Ortega received his PhD at Texas A&M University in May 2019. He has recently accepted a tenure track assistant professor position at Rockford University where he is going to teach Classics and Spanish. The title of his doctoral dissertation is “Rage and Desire: Thymotic Impulses in Hispanic Greece”. On April 2019 he received a Distinguished Graduate Student Award in recognition of academic achievement, professional dedication and outstanding contributions in research at Texas A&M University. He also received the Murray and Celeste Fasken Distinguished Graduate Student Teaching Award 2018 at Texas A&M. He has taught Classics in Cuba, Spain and the United States. He has also been instructor of Classical Greek and Classical Reception at Texas A&M University. He is alumnus of the American School of Classical Studies at Athens (ASCSA) where he was part of the ASCSA Summer Section in 2018. His most recent publication is Ballet clásico y tradición grecolatina en Cuba (“Classical Ballet and Greco-Latin Tradition in Cuba”) co-authored with Jonny Luis Téllez and published by Aduana Vieja (Spain) in 2019.

01/09/2022
Blog: Inclusive and Culturally Responsive Teaching in Classics
Like many educators, I have found myself in an endless loop lately of thinking and rethinking my teaching...
01/07/2022
Blog: A Digital Ethnography of a Conference in a Crisis
To write about the Capitol Insurrection, as the one-year anniversary approached, I went back through my chat logs...
01/06/2022
Blog: Ista Tempora! Isti Mores!: January 6th, A Year Later
At 2:00 pm on January 6th, 2021, a mob made its way up the steps of the U.S. Capitol following a morning of...
01/05/2022
Blog: Sallust at the Insurrection
What do you read for an insurrection? Classics offers plenty of material for revolutionary bibliophiles:...
01/03/2022
Blog: The WCC at 50: Fostering Communities of Care
The year was 1971. In the lobby of a hotel in Cincinnati, OH, a small group of early career faculty and graduate...
END_OF_DOCUMENT_TOKEN_TO_BE_REPLACED