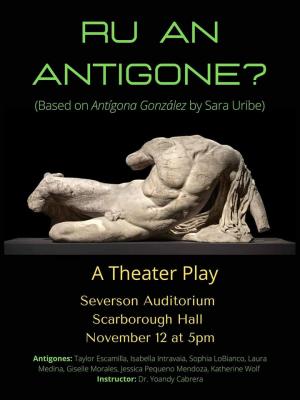 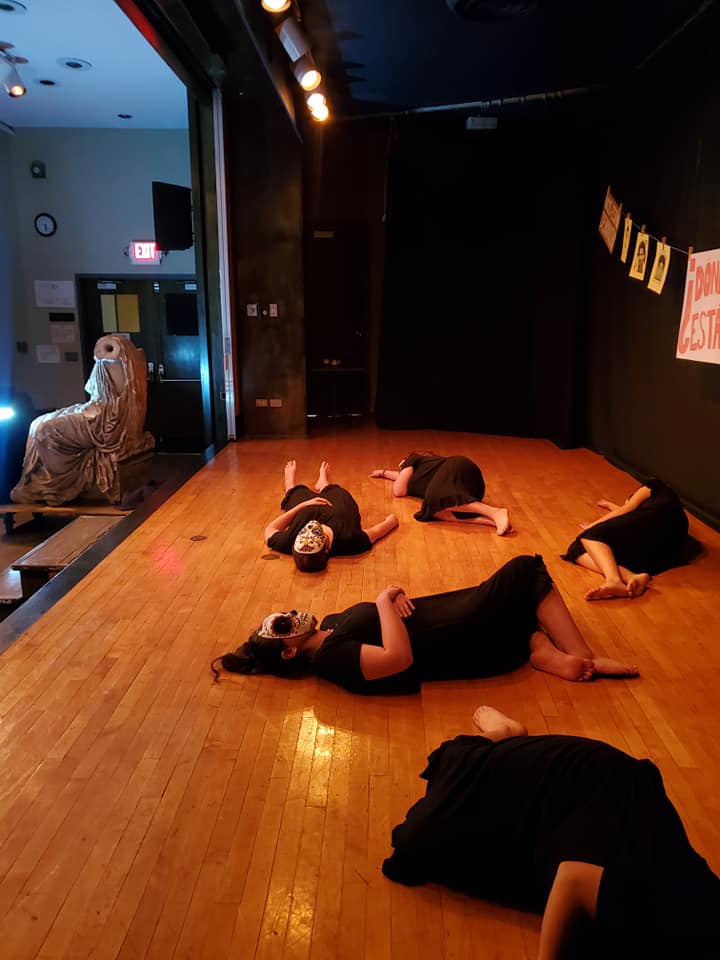 In this play, we also go from the first Greek actor ever, saying “I am Dionysus,” to these modern Mexican Antigones stating, “I did not want to be an Antigone, but it happened to me.” We go from the chorus to the first character, and then back to the chorus. Because “we are many,” because we “are one, and the same.” Antígona is the plural voice of “the father or daughter or brother or uncle or sister or mother or son of the dead and abandoned body.” The theatrical scene becomes a skene (tent) again, but now is the tent of the protesters, with posters and pictures of those who have been taken and disappeared.

In CLAS 262, we worked with the Rockford University archive. Voices of alumni who wrote about Antigone and Oedipus during the 19th and 20th centuries have joined us to be part of this journey. We go from the Greek sculptures in the basement to the voices from the RU archive and then to our own time, where other bodies in Mexico, Colombia, Chile, and Cuba have been rising and falling, rising and falling, victims of violence and tyrannies. And still, they continue, willing to speak their truth. Bodies of the past and the present, dead and living bodies, beloved and hated bodies. “Name them all so as to say: this body could be mine.” 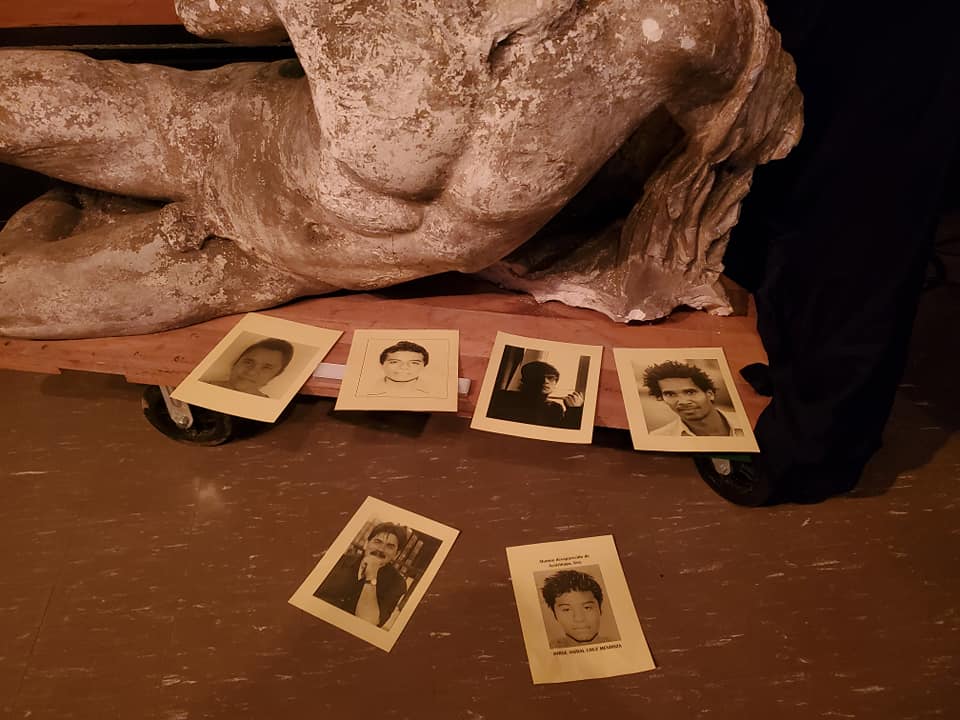 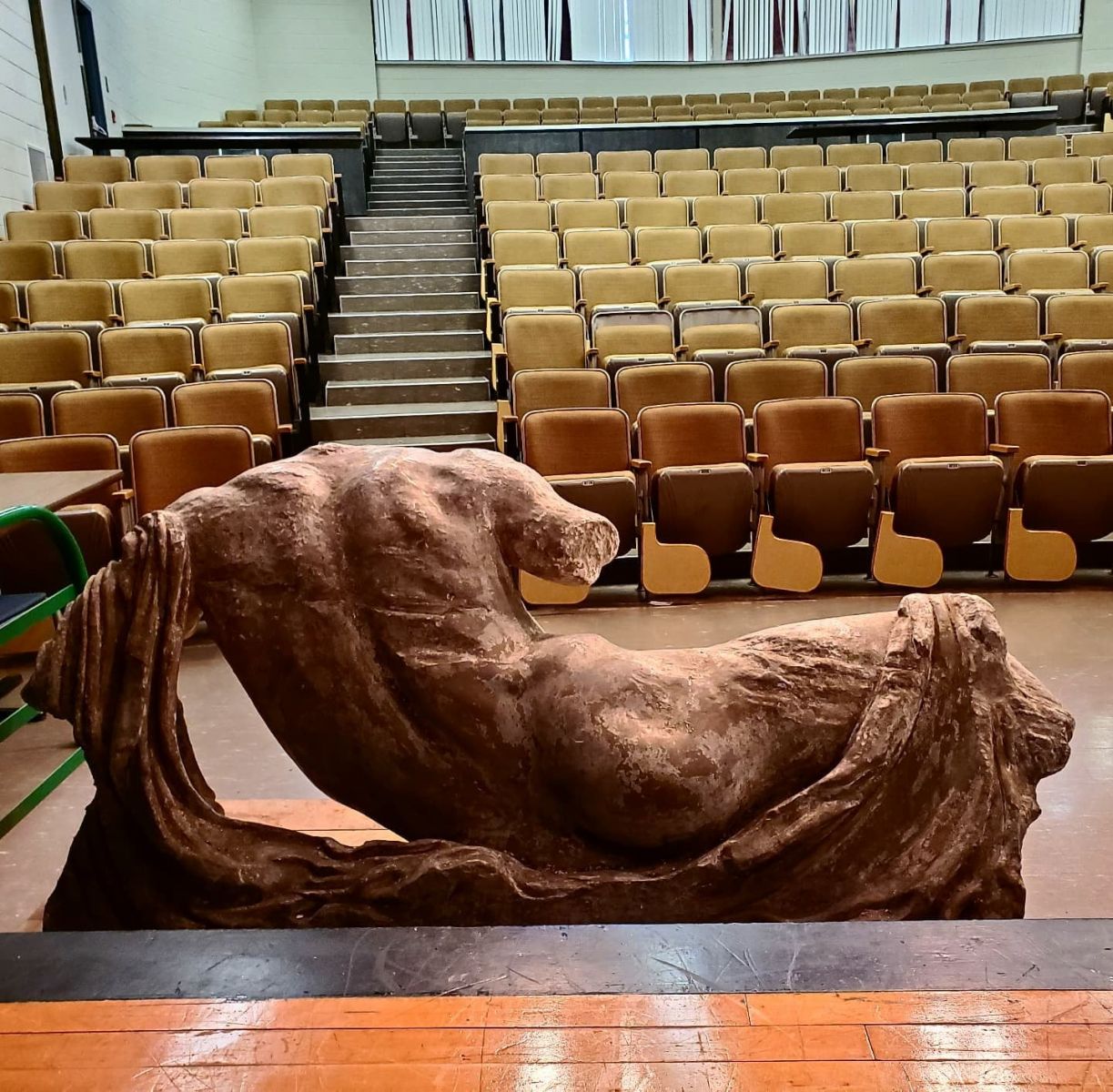 Yoandy Cabrera Ortega received his PhD at Texas A&M University in May 2019. He has recently accepted a tenure track assistant professor position at Rockford University where he is going to teach Classics and Spanish. The title of his doctoral dissertation is “Rage and Desire: Thymotic Impulses in Hispanic Greece”. On April 2019 he received a Distinguished Graduate Student Award in recognition of academic achievement, professional dedication and outstanding contributions in research at Texas A&M University. He also received the Murray and Celeste Fasken Distinguished Graduate Student Teaching Award 2018 at Texas A&M. He has taught Classics in Cuba, Spain and the United States. He has also been instructor of Classical Greek and Classical Reception at Texas A&M University. He is alumnus of the American School of Classical Studies at Athens (ASCSA) where he was part of the ASCSA Summer Section in 2018. His most recent publication is Ballet clásico y tradición grecolatina en Cuba (“Classical Ballet and Greco-Latin Tradition in Cuba”) co-authored with Jonny Luis Téllez and published by Aduana Vieja (Spain) in 2019.

05/23/2022
Blog: Contingent Faculty Series: An Interview with Victoria Austen
Our seventh interview in the Contingent Faculty Series is a virtual conversation between Dr. Taylor Coughlan and...
04/13/2022
Blog: Two Years Later: “Classics” after Coronavirus?
In an April 2020 post for Eidolon, I gathered predictions on “classics after coronavirus.” Two years later, it’s...
04/08/2022
Blog: Ancient Worlds, Modern Communities: Increasing Accessibility for the Study of the Ancient World
The Ancient Worlds, Modern Communities initiative (AnWoMoCo), launched by the SCS in 2019 as the Classics...
03/21/2022
Blog: I Love You, I Hate You: A Student’s Perspective on Learning Latin
I have always enjoyed Latin class because it felt like a puzzle, much like math. Find the verb, find the noun that...
03/18/2022
Blog: Power to Punish and Authority to Forgive: Imperial State and Imprisonment in 4th-Century Antioch
Research ideas often develop out of chance encounters or unplanned circumstances. My dissertation project was born...
END_OF_DOCUMENT_TOKEN_TO_BE_REPLACED