Amphora: A New Incarnation of Latin in China 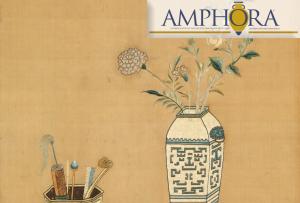 This article was originally published in Amphora 11.1. It has been edited slightly to adhere to current SCS blog conventions.

On a wintry day in 1996, I was thumbing through catalogues in a deserted corner of the library of Beijing Normal University when my attention was suddenly seized by some titles in a language strangely familiar. I could easily decipher them because of their resemblance to English words, and I knew the names of the authors as I had read them in translations. Latin! My instinct told me. I relayed this discovery to my teacher of Shakespearean plays, a BA in Classics who had just graduated from Oxford. The next morning saw us standing in front of a counter in the most secluded part of the library, after spiraling flights of gloomy stairs. A long silence ensued before the books were fetched from a bank ten stories above and presented before us. In a thrilled voice, my teacher began to read a Latin passage aloud to me. We had been the first in decades, the librarian told us, to borrow these books, and there were many more such books simply locked in some rooms, as no one had the expertise and the energy to catalogue them. I quickly found out, with the available catalogues, that the university had a substantially larger collection in Latin and Greek even than that of the National Library. Stunned, I tried to explain to myself this peculiarity. Then it dawned on me that most of these titles must have been acquisitions of Fu Jen Catholic University, out of which Beijing Normal University grew. At least five centuries ago, Italian missionaries, following Marco Polo’s footsteps, first brought that elegant language of Latin to Chinese scholars who were still writing in equally elegant classical Chinese. In the thirty years after 1949 when the Communist Party came to power, both languages were buried, the former suffering from the stigma of decadent bourgeois culture, the latter taken as a leftover of China’s monarchic past. Though I knew no Latin at the time, the very survival of these books was a miracle for me, considering especially the systematic demolition of ancient heritage in the Cultural Revolution (1966-76). Motivated by a veneration for antiquity, I began to learn the language, although my efforts were continually interrupted by my other pursuits.

Eight years later, already a faculty member at BNU, I was assigned to work with a visiting professor from Fu Jen Catholic University (not the original institution in pre-Communist Peking, but its heir, founded on its model in Taiwan). This American professor had studied Chinese literature for many years, but he was also a Catholic monk, so Latin was air to him. Fu Jen University had started a summer program in Western Classical and Medieval Studies, and one of the American professor’s missions was to look for mainland Chinese scholars who might be interested in it: in the first decade of the twenty-first century, there was great enthusiasm in the academic world for exploring the history of Christianity and missionary activities in early modern China. This zeal rapidly increased, and young students attracted to the Catholic church were increasingly eager to learn Latin so that they could attend Latin masses and read the Vulgate and other books in the theological canon. The professor flew to BNU once a month, teaching a course and teaching Latin to scholars, including myself, who were ready to enroll in that program. Each time he would bring a new Latin textbook for me to conquer. I did not make the trip to Fu Jen in the end, but my confidence in my Latin grew.

In 2006, my application for teaching the first Latin course at BNU was approved. Before I launched my project, I had conducted research on the situation of Latin teaching in China. There were no Chinese institutions conferring academic degrees in Western Classics, but some Latin courses had been introduced. Leopold Leeb, a legendary Austrian with a Ph.D. in Chinese philosophy, was teaching Latin, Greek, and Hebrew single-handedly at Renmin University (Beijing); since then he has translated and compiled more than ten books related to Latin teaching. At Peking University, Latin was offered by two teachers, one in philosophy and one in world history. At other universities, Latin classes were mostly of a practical nature, required of students majoring in botany, zoology, or medicine. I named my course “Introduction to Latin and Selected Readings,” using Wheelock as the textbook and supplementing it with excerpts from other sources. I had intended to run it as a two-year course, but it turned out that I had to reshape it to a one-year frame and teach it twice. For students to become proficient in Latin, I was led to think, such a pattern of optional courses with half-hearted students seemed not viable; it is essential to have the backing of a dedicated institution that can draw enthusiasts who recognize a destiny in learning a language.

That same year, I received a grant from China’s Ministry of Education for a project on Catullus. I was determined to create the first Chinese version of his Carmina. By then only six volumes of Latin poetry (and a meager anthology) had been translated into Chinese: one by Virgil (Aeneid), three by Ovid (Metamorphoses, Ars Amatoria, Heroides), one by Lucretius (De Rerum Natura), and one by Propertius (Elegiae). Most of these were done either in the pre-Communist era, or during the short-lived boom in the 1980s when Latinists of older generations raced against time in their final years to make up for the tragic waste of their talent in earlier decades. A generous sum from the Loeb Classical Library Foundation enabled me to publish my translation of Catullus and a monograph on him as well. The warm reception of the Chinese Catullus astounded me, prompting me to take another view of Latin in China. I noticed that all the old translations of Latin poetry were being reprinted, that a Chinese version of Wheelock had appeared, and that more than ten universities were regularly offering Latin courses. All these changes had taken place within just two or three years. Latin, long committed to oblivion, was being revived.

For myself, Latin brought me another stroke of fortune. I won a Fulbright Visiting Scholarship for 2012-13, and I was hosted by the Department of Classics at the University of Washington. I was finally able to submerge myself in a milieu congenial to studying Latin poetry. In the year before my trip to the United States, a series of events dazzled me in quick succession. The first conference on Latin Teaching at Chinese Universities was held in June 2011; five months later, the first Center for Studies in Western Classics was founded at Peking University; in April 2012, a symposium titled “The Western Classics in Modern China” was held at the University of Chicago Beijing Center; another institute devoted to Latin studies, Latinitas Sinica, was established in June at Beijing Foreign Studies University. During my stay at UW, I missed out on a landmark event: the Association for Comparative Studies of Western and Chinese Classics was launched in Guangzhou. I could only ascribe it to magic that all of a sudden we came to have our own organization and the attention of the whole nation.

But more than that: when attending the 144th annual APA meeting in January 2013, I learned that there was going to be a panel the next year dedicated to China, called “Classics and Reaction:  Modern China Confronts the Ancient West.” So, this new incarnation of Latin is sending waves across the Pacific Ocean.

Several trends are now converging. First, an elitist turn combined with a new emphasis on liberal education at China’s top universities has naturally led to the incorporation of Western classics into their curricula, resulting in an explosive need for scholars who can teach Latin and Greek. At Sun Yat-sen University (in Guangzhou) and my home institution Chongqing University, small groups of honors students are required to learn Latin and Greek, together with classical Chinese, as main subjects. Second, decades of Westernized education and exposure to the outside world have created a large class of youths who are proficient in English or other modern European languages, and who are now eager to push the frontiers of their learning into the depths of the Western past. Latin and Greek are powerful weapons in their intellectual expeditions.

Most importantly, this outburst of passion for the Western classics has been parallel to, and following a similar historical logic as, our belated reconciliation with our own ancient tradition. After a century’s sterile radical nihilism regarding our heritage, many of us have begun to treat our classics with the respect and care they deserve, refraining from simplified assumptions and searching through painstaking negotiations with the texts for intelligent readings that are relevant both to the original contexts and to our contemporary concerns. Likewise, we believe that it is high time we discarded stereotyped generalizations of Western values, ceasing to take modern Euro-American civilizations as the “medicine” for the “diseases” of an “inherently” defective Chinese culture, a conviction shared by most advocates of the May Fourth Movement in the 1910s and carried to catastrophic extremes by the Red Guards half a century later. Studies of Western classics help us understand the roots and ramifications of this drastically different tradition, and reveal ways in which any tradition can be questioned, revised, and transformed in an ongoing dialogue that steers clear of both servile dogmatism and arrogant dismissal.

Therefore, this new life of Latin in China is not a pale ghost shunning the vital energies of the sun, or a mummy in the museum holding interest only for the curious. Rather, its pulsing arteries and flexing muscles promise active engagement in a labor of love, the building of a bridge across times and traditions, spanning the bitter divide that has stranded people in the cultural East and in the cultural West.

Blog tags
Amphora
Classics in China
My Path to Classics

Yongyi Li is professor of English at Chongqing University, Chongqing, China. His major fields of inquiry include Anglo-American modernist poetry, Roman poetry and classical Chinese poetry. An active literary translator, he has rendered fourteen books into Chinese from English, French and Latin, of which Catullus' Carmina signaled the first full presentation of the Roman poet in China. liyongyi@cqu.edu.cn

Title: The Complete Poetry of Horace: A Latin-Chinese Edition with Commentary (winner of Lu Xun Prize for Literature in 2018)

07/10/2020
Blog: What Parts of Classics Would We Choose To Preserve for the Future?
In light of the present administration’s brazen disregard for facts and the public good, you’ve got to admire past...
07/03/2020
Blog: What Are the Best Classics Books for Children?
Finishing my third trimester in the midst of a pandemic was not what I had planned for the last months of...
06/26/2020
Blog: Can Studying Classics Encourage Empathy and Equity?
The new Classics Everywhere initiative, launched by the SCS in 2019, supports projects that seek to engage...
06/19/2020
Blog: Creating a Coalition to Empower Classicists of Color
In 2018, a group of scholars founded Mountaintop Coalition, an SCS-affiliated group with a shared interest in...
06/12/2020
Blog: Women in Classics: Froma Zeitlin
Froma I. Zeitlin retired from Princeton University in 2010, where she was the Charles Ewing Professor of Greek...
END_OF_DOCUMENT_TOKEN_TO_BE_REPLACED

END_OF_DOCUMENT_TOKEN_TO_BE_REPLACED
Calls for Papers
CFP: Myths and Societies: A Cross-Cultural and Intertemporal Approach