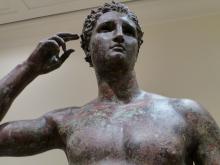 The SCS board of directors has endorsed a statement issued by the Middle East Studies Association on a proposed rule by DHS that would limit the duration of student visas. The proposed rule, if adopted, would mark the most sweeping change to student visa rules in decades. You can read the statement here:

CFP: ‘Modern’ Women of the Past? Unearthing Gender and Antiquity

‘Modern’ Women of the Past? Unearthing Gender and Antiquity

The AAIA, CCANESA, AWAWS, CCWM and the University of Sydney Departments of Archaeology and Classics & Ancient History warmly invite abstracts for our forthcoming conference on the reception of ancient women, to be held over 5-6 March 2021, ahead of International Women's Day, 8 March 2021.

Despite restrictions on their autonomy from the (mostly) patriarchal societies in which they lived, women of the past were astronomers, chemists, warriors, politicians, philosophers, and medical practitioners (to mention just a few examples). Women strove to understand the world around them, and through their observations and innovations, they demonstrated that gender provides no barrier to participating and excelling in a full range of human endeavours.

Fellowship: Center for Ballet and the Arts

Resident Fellowship - Center for Ballet and the Arts

The Resident Fellowship is our core offering for scholars and artists of all disciplines to develop projects that expand the way we think about the history, practice, and performance of dance. Past fellows have come from wide-ranging disciplines such as history, design, philosophy, visual arts, and more. Fellows are not required to be experts in ballet or dance, but must have an interest in engaging with the art.

The fellowship provides space, a stipend, and the time to pursue rigorous work. Fellows also gain new colleagues and a broad community of scholars and artists, two communities that do not often meet.

Fellowship timing and duration depend on individual fellow needs and project scopes. Prior residencies have run between four and sixteen weeks. The residency must occur during NYU’s academic year (September 2021 – May 2022).

Click here for the application questions as they will appear on the platform.