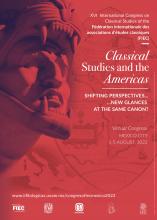 The University of Turin and the De Wulf-Mansion Centre for Ancient, Medieval, and Renaissance Philosophy (Leuven) are glad to invite you to the conference "Providence and free will from the post-Hellenistic age to the Middle ages" that will take place in Turin on June 8th-10th.
The conference will be held in person, but a connection will be made available for those who wish to attend online. To register, please write to filosofia.antica.to@gmail.com by Monday 6th.
View full article. | Posted in Conferences, Lectures, and Meetings on Thu, 06/02/2022 - 7:21am by .

Blog: Dissertation Spotlight: The Portraits of the Roman Empress Sabina: A Numismatic and Sculptural Study

The portraits of Sabina represent a shift in the representation of imperial women in the Roman Empire. Sabina is the first empress to appear as the obverse portrait of a continuous coin production at Rome and the first woman to appear on all of the main denominations at the central mint. Her portraiture is also more varied than that of any previous empress. She is represented on imperial coinage with five different portrait types—i.e., modes of representation—most easily distinguished by hairstyle, all of which are depicted below. This is matched by an increased presence of Sabina’s portraits in provincial coinage and sculpture. This greater visual prominence for the Empress set a new standard that was followed by subsequent administrations, making the portraits of Sabina an integral corpus in the history of Roman imperial portraiture.

We are organizing an international e-conference entitled “Archaeology of Izmir-Smyrna” that will take place on November 17-18, 2022 on Zoom.us. We warmly invite contributions by scholars and graduate students from a variety of disciplines of ancient studies related to these objects. The video conference is free of charge. We would be delighted, if you could consider contributing to our e-conference and contact us with the required information before September 9, 2022. Our e-mail address is: alevcetingoz@gmail.com

We kindly request that you alert any persons within your research community who would be interested in participating at this e-conference, either by forwarding our e-mail through Academia, Researchgate, Facebook, Twitter, Instagram or other similar social media, or by printing this circular or poster and displaying it in your institution. We hope that you will be able to join us on Zoom, and look forward to seeing you in May 2022!

Click Here for the full description and requirements:
/sites/default/files/userfiles/files/1_%20DEU%20Sempozyumu%20Birinci%20Sirkuler%20Ingilizce.doc 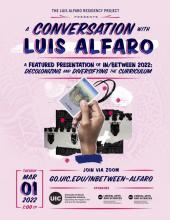 I first met Luis Alfaro at the 2019 annual meeting of the Society for Classical Studies, where he delivered a deeply moving keynote address in which he discussed his adaptations of Greek tragedies and how his plays have brought reimagined ancient stories to new audiences, to provoke social change. This profoundly important event was made possible by a partnership with my former employer, the Onassis Foundation USA, the Classics and Social Justice affiliated group, and the SCS. As many of us will recall, this conference was also marred by the ugliness of racism, which reared its awful head amid an already tense, ongoing conversation about the state and future of our field that has since spilled into the wider public discourse, perhaps for the worse. But there is hope, and I sincerely believe that Alfaro’s work can be one of those mechanisms of change, if only our field would embrace it.

This year, the CANE Summer Institute will run simultaneously in two modes: in person at Brown University and virtually via CANE Zoom

See the full program and learn about the mini-courses