Grace Starry West, 72, died of complications from lung cancer on Sunday, May 19 at her home. She was a member of the SCS since 1973, Chair of the Local Arrangements Committee in 1999, and trustee of the Vergilian Society from 1986-1989. Her name will be especially familiar to Vergilians on account of her groundbreaking UCLA dissertation on “Women in Vergil’s Aeneid” (1975), and to students and colleagues from the University of Dallas, where she helped Classics grow into an outstanding program with three tenured faculty members and a steady flow of majors. As John F. Miller, Professor of Classics at the University of Virginia, recently observed: “Her work on Virgilian women was pioneering; her leadership at Dallas admirable.”

Blog: Addressing the Divide Between Archaeology and Classics

'Addressing the Divide' is a new series of columns that looks at the ways in which the modern field of Classics was constructed and then explores ways to identify, modify, or simply abolish the lines between fields in order to embrace broader ideas of what Classics was, is, and could be. This month, we look at the divide between classical archaeology and philology by speaking with archaeologists Sheira Cohen, Eric Kansa, Kristina Killgrove, James Newhard, and Alison Rittershaus.

The American Academy in Berlin invites applications for its residential fellowships for the academic year 2020/21.

The Academy seeks to enrich transatlantic dialogue in the arts, humanities, and public policy through the development and communication of projects of the highest scholarly merit. Past recipients include anthropologists, art historians, literary scholars, philosophers, historians, musicologists, journalists, writers of fiction and nonfiction, filmmakers, sociologists, legal scholars, economists, and public policy experts.

Approximately twenty Berlin Prizes are conferred annually. Fellowships are typically awarded for an academic semester, but shorter stays of six to eight weeks are also possible. Benefits include round-trip airfare, partial board, a $5,000 monthly stipend, and accommodations at the Academy’s lakeside Hans Arnhold Center, in the Wannsee district of Berlin.

For 2020/21, the Academy will also award three specially designated fellowships: two Andrew W. Mellon Fellowships in the Humanities, for work that demonstrates an interest in the topics of migration and social integration, race in comparative perspective, or exile and return. In addition, in memory of its founder, the Academy will name a Richard C. Holbrooke Fellow for a project that looks at diplomatic approaches to resolving major global issues, from armed conflicts to environmental challenges to the impact of new technologies. 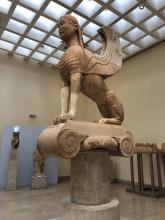 This month, we spotlight the graduate research of Dr. Yoandy Cabrera Ortega, who recently defended his dissertation on the portrayal of human emotions in ancient Greek myths and in modern literature from Spain and Latin America.

My dissertation was an interdisciplinary one, intertwining different approaches and fields such as classical reception, queer studies, affect theory, and Hispanic studies.

Can a computer understand the hendecasyllables of Catullus, the declamations of Seneca, or the letters of Pliny? Not yet, and maybe never in any conventional sense of this word. No one has succeeded so far in teaching a computer to comprehend language – that is, to reason about, generate, act upon and, importantly, communicate intentions through symbolic speech – let alone to appreciate texts written in a dead language with a sophisticated literary tradition. (Embodied cognitive science claims, in fact, that without a human body no computer can ever hope to achieve human understanding). But it is possible to represent the meanings of the Latin language in a way that can be manipulated and analysed by computers. The idea of training machines in these meanings forms the basis for the field of natural language understanding, which is a specialized kind of natural language processing (NLP) focused on modelling linguistic semantics.

The articles in this volume will:

The book will consist of the following tentative sections:

Your Article Proposal should include

The Ancient Philosophy Society was established to provide a forum for diverse scholarship on ancient Greek and Roman texts. Honoring the richness of the American and European philosophical traditions, the APS supports phenomenological, postmodern, Anglo-American, Straussian, Tübingen School, hermeneutic, psychoanalytic, queer, and feminist interpretations of ancient Greek and Roman philosophical and literary works.

THEME: Although papers on all topics relating to the continental interpretation of ancient philosophy are welcome, this year’s conference organizers are especially interested in assembling one or two panels relating to the themes of xenia or ‘hospitality’ and the xenos or the ‘foreigner, stranger,’ thereby bringing the ancients into the urgent contemporary conversation about social/political issues such as immigration, national identities, and border policy.

Submissions cannot exceed 3000 words in length (not including notes) and must be prepared for blind review.

The eleventh edition of ELEATICA - International Session on Ancient Philosophy, will be held on September 18-21, 2019 at the Fondazione Alario per Elea-Velia Impresa Sociale (Ascea Marina, Salerno, Italy, in the vicinity of the archeological area of ancient Elea). This time the main lectures will be given by Prof. Richard McKirahan (Pomona College, Claremont, Los Angeles, President of the International Association for Presocratic Studies).
Here is the conference programme:

08:00 Visit to Paestum (with tastings of local gastronomy)

CFP: The Soul in Ancient Philosophy

The Soul in Ancient Philosophy

We are delighted to announce our upcoming graduate conference on ‘The Soul in Ancient Philosophy’ taking place at the University of St Andrews, Scotland on the 11th and 12th of October 2019.

The keynote lectures will be delivered by Professor Dorothea Frede (Hamburg) and Professor Hendrik Lorenz (Princeton).

The soul has been of central importance in the ancient philosophical tradition, from the earliest Greek thinkers to the Neoplatonists. For ancient philosophers, the soul helps to account not only for various kinds of life on earth, such as human, animal, or even plant-life, but also the heavenly movements of the stars and planets. While the soul is often viewed as a principle of motion, in humans it is associated with a wide range of important phenomena, such as cognition, love, death, reason, emotions, and feelings. Moreover, the soul is sometimes seen to have a life of its own apart from the body, so that a distinction can be drawn between embodied and disembodied existence and experience. In this way, the soul naturally brings together a range of different philosophical concerns, including epistemology, ethics, psychology, the natural sciences, cosmology, and eschatology.