Awards and Fellowships
Submitted by stephanie.crooks on Monday, December 18, 2017 - 10:57am

Congratulations to Michele Valerie Ronnick and Ruth Scodel, who were both awarded Lifetime Achievement Awards by Eta Sigma Phi this Fall. Read more about the awardees and their achievements in Nuntius, Eta Sigma Phi's publication.

“Whose Heritage is it Anyway?”: Local Responses to Cultural Heritage Preservation in the Age of UNESCO

UT Antiquities Action invites the submission of abstracts for its 5th annual symposium, to be held on Saturday, the 4th of April, 2020 at the University of Texas at Austin. 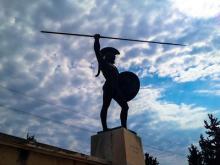