Louise Price Hoy, former chair of Classical Studies at Marshall University and longtime CAMWS Vice-President for West Virginia, died July 4, 2010. She possessed enviable academic credentials: B. A. in Latin from Duke University where she was elected into Phi Beta Kappa in 1939, M. A. in Latin in 1945, and Ph. D. in Latin 1952, both from Bryn Mawr College. She completed her dissertation, Political Influence in Roman Prosecutions, 75 B.C. to 60 B.C., under Lily Ross Taylor, becoming Professor Taylor’s last doctoral graduate. She began her career at Swarthmore College and Western Reserve University before coming to Marshall University in 1963 where she taught with distinction and chaired the Classics Department for 24 years. Her early experiences in rural Appalachia and the southern coal fields shaped her understanding of the human world and created in her traits that made her a consummate teacher and a life-changing influence on students from small agricultural communities and coal towns throughout West Virginia. She was born in Mullins, West Virginia, on November 11, 1920 to Cyrus Christopher and Eva Louise Price. Moving his family as many as twenty times a year, her father ran coal company stores, an occupation that brought Louise into contact with diverse kinds of people, some so isolated that they did not know of strawberries until her father introduced them. This upbringing galvanized her to create the best educational experiences possible for students who sorely needed it and to position her women students for success in an often hostile world—both with a tireless and assertive practicality. Though she spent the first third of her career as her institution’s single classicist, by the middle of her tenure at Marshall, she had trained almost every high school Latin teacher in West Virginia. When the state budget did not provide, she spent her own funds generously on educational travel and supplies; she could be relied on to extend a helping hand to students in need. Louise regularly taught overloads and guided her students to acquire research skills so that they would have a competitive chance for graduate school. She encouraged her students to become broadly educated in the humanities and instructed them in the values of a liberal education. In that context, she spent her academic life in the research of teaching, and the product was its own reward. In retirement, she increased her lifelong commitment to the American Association of University Women and was instrumental in helping Centre College in Danville, Kentucky to create a Latin and Greek curriculum. Louise was especially fond of Aeneas’ reflection to Achates on the human condition (Aen. 1.462): sunt lacrimae rerum et mentem mortalia tangunt. For all Louise’s students, colleagues, and friends, this line now takes on special meaning. 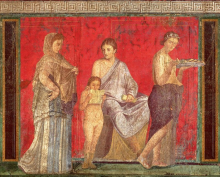