In the News: Back to School, but for the Degree, Not Just the Fun

From the New York Times:

School was out, and Jack Kaufmann, who teaches 8th and 9th grade Latin at the elite Hewitt School in Manhattan, was on his way to catch the train home to Westchester.

That’s hardly surprising, except that Mr. Kaufmann is 71 years old and has been teaching for only the last three years. For much of the last 32 years, the dapper, silver-haired Mr. Kaufmann was a partner at the law firm Dewey Ballantine.

“I really enjoyed it,” he said of his law career, chatting over a quick coffee before heading home. “But at a certain point, I felt that I didn’t need to keep practicing.”

So in 2002 Mr. Kaufmann, who had enough money to retire comfortably, left the firm and began taking college classes. First he took a class on Chaucer, then another on the “Divine Comedy” by Dante and still another called Heresy in the Medieval World. He found the work so fascinating it led to a master’s degree in Classics (Latin and ancient Greek) at the City University of New York — and eventually to teaching jobs, first at the Browning School, then at Trevor Day and then at Hewitt.

In the News: Back to School, but for the Degree, Not Just the Fun 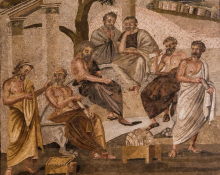