According to U.S. News and World Report, "Med school officials say it's all Greek to them that classical language skills help aspiring doctors." Read the article, which quotes Cynthia Bannon and Charles McNelis, online.

CFP: Network for the Study of Archaic and Classical Greek Song

The conference will take place on the island of Spetses in Greece from July 1 to July 5, 2020. The topic of the conference is "Performing Texts."

Workshop: Bringing Latin to Life in the Classroom

Justin Slocum Bailey will give a two-day series of workshops, BRINGING LATIN TO LIFE IN THE CLASSROOM, in Syracuse on Sept. 20-21, hosted by SU and generously supported by Binghamton University, Le Moyne College, The Humanities Corridor (and others).

Justin will help explore new and interactive techniques of Latin instruction. His pedagogy has proved to be very fruitful on all levels of Latin language classrooms (high school, college, etc.). Please consider attending and help spread the word.

Registration is $40 for one day, $75 for both: this will help cover a at least the lunches and refreshments. Students can attend for free. If the fee is an impediment to participation, we can offer a reduction.

Tina Chronopoulos (tchronop@binghamton.edu) and I will be happy to learn if you want to attend and to hear any suggestions.

This is a call for submissions of papers to be presented to the Society for Ancient Greek Philosophy.

The Deadline for Submission of papers is August 1.

a) To have your paper considered, you need to be a member of the Society for 2019/20 - a form is attached, and it needs to come back via regular mail, not as an attachment!

b) You should submit your paper as an attachment to an email addressed to apreus@binghamton.edu. Your email message is your cover letter; it should include your name, address, academic affiliation (as of 2019/20), and the title of the paper. Note if you would prefer the Central or Pacific Division, or either! The paper itself should be prepared for blind (anonymous) review, and IT MUST BE IN DOC, DOCX, OR RTF FORMAT! NOT PDF! Papers may include "real Greek" if it is in a Unicode font.

The Program Committee has decided that authors who had a paper accepted by the Society for presentation at a meeting of the American Philosophical Association or the Society for Classical Studies during the past year should not be considered.

Yearly maintenance on the Placement Service is now complete. There will be a Newsletter later this month detailing the final jobs report and the changes made to the service over these past two weeks.
Anyone hoping to receive job announcements and other benefits of the AIA/SCS Placement Service will need to sign up for this new academic year. Here is a tutorial on how to do so: https://youtu.be/zr7gTIUdqiQ. The price will remain free for AIA and SCS members, and will continue to be $55 for non-members.
We are also excited to announce our newest publication: "Careers for Classicists: Graduate Student Edition." Building on the last version, which was published in 2012, this guide provides updated, modernized, and detailed advice for graduate students seeking jobs both inside and outside the classroom.
---
View full article. | Posted in SCS Announcements on Tue, 07/16/2019 - 10:53am by Erik Shell.

Learn about our affiliated groups, old and new!

In June the SCS Program Committee chartered three groups that are already doing great work. SCS is delighted to welcome them as affiliates:

Look out for their events at the 2020 Annual Meeting.

Upon a recommendation by the Society for Classical Studies, FIEC has approved a statement on the format of abstracts and keywords for the submission of articles

L’Année Philologique is the main database for publications in Classical studies. In the interest of all scholars, authors and researchers, it seems important to define some basic requirements that will make it easier for the local branches of L’Année Philologique to analyze the entries. The following is a recommendation made to all associations of Classical studies affiliated to FIEC. Associations are kindly asked to circulate this statement among their members. In view of the ever-growing number of articles and chapters in collective volumes processed for registration by L’Année Philologique, and in order to reduce the amount of work required of the various branches of L’Année Philologique, it is recommended that journal and volume editors regard it as a best practice of the efficient analysis of the data that each article or chapter be accompanied by a brief abstract and a list of keywords. To ensure the utility of abstracts and keywords for the efficient analysis of data for L’Année Philologique, please take note of the following guidelines: 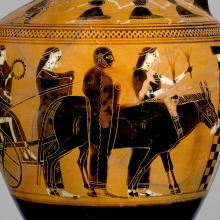 The new Classics Everywhere initiative, launched by the SCS in 2019, supports projects that seek to engage communities all over the US and Canada with the worlds of Greek and Roman antiquity in new and meaningful ways. As part of this initiative the SCS has been funding a variety of projects ranging from children’s programs to teaching Latin in a prison. In this post we focus on two programs that bring the study of Greek and Roman antiquity to two traditionally underserved communities: incarcerated students in a correctional facility and the racially, ethnically, and economically diverse community in Winnipeg, Canada.

There is a pressing need to make Classics more open and inclusive, and to diversify the voices dominating the study of Greek and Roman antiquity. A growing number of classicists are rethinking the field's often unspoken assumptions, exploring the ways in which contemporary scholarship may be affirming or challenging existing social structures, and reaching out to more diverse audiences, to encourage new responses and perspectives.

Classical Studies in the 21st Century

Classical Studies in the 21st Century: More Relevant Than Ever

The AIA-SCS joint ad hoc committee on the future of classics and archaeology met earlier this year to discuss pressures common to both fields. The group agreed to create a document that can be used to remind college and university administrators of what we do and our relevance. The joint statement entitled “Classical Studies in the 21st Century: More Relevant Than Ever,” is below and also available as a PDF download. Department chairs and other departmental members are welcome to use it as talking points with decision-makers at your institutions, be they chairs, deans, provosts, chancellors and some other administrator, as a reminder of the continuing and important benefits of our fields. You may use the entire statement or customize it to meet the specific needs of your department and profile of your institution. We realize that there are many successful advocacy strategies, and we hope this brief statement will join them. If you have already successfully advocated to preserve or expand your department, let us know what worked.

FIEC Resolution on Latin and Greek

The International Federation of Associations of Classical Studies (FIEC) supports the registration of Ancient Greek and Latin in the UNESCO List of Intangible Cultural Heritage. Those two languages have had a deep impact on the Mediterranean area (in a wide sense) over several millenia; this impact is still to be felt very strongly today, not only in that area, but also in the world at large.

Ancient Greek was the main language spoken and written in Archaic and Classical Greece, as well as in the whole Eastern Mediterranean from the Hellenistic period till the end of the Byzantine period. In contact with other languages (notably Semitic languages and Latin), it has gradually evolved without changing its basic structure, to become Modern Greek. Latin started in the Italic peninsula and, as Roman power extended over the centuries, has spread to most areas of present-day Europe, where it evolved to produce the Romance languages. Through the process of colonization, Latin has also spread to other parts of the world, notably the Americas.