Update on Change of Association's Name

I want to provide an update on the steps we are taking to implement the change in the name of the  Association that the members approved this summer.  With the help of incoming President Kathryn Gutzwiller, I formed an ad hoc committee consisting of members who represent various communities in our society to consider issues such as communicating with audiences outside the membership and guiding the graphic designer who is creating a new logo for us.

As part of this process we have learned that taking the legal steps required to change our name is the easiest task ahead of us.  We are incorporated in Delaware, and that state requires only that we file a simple form and pay a modest fee.  Legally we will become the Society for Classical Studies as soon as we make that filing.  Before we take that step, we want to have a logo ready and decide how the new name and its “subtitle” (founded in 1869 as the American Philological Association) will appear on our printed and electronic publications.  We also want to identify and prepare communications for all the audiences (both internal and external) who need to know about our change.

In the interim, we are making good progress on several initiatives that have the same overall goal as the change in our name and our recent Gateway Campaign:  to continue to foster outstanding scholarship and teaching in classics while sharing our knowledge of and appreciation for classical antiquity with the widest possible audience.

I look forward to seeing many of you at the upcoming annual meeting.  We will still, officially, be the American Philological Association at that point, but, as reported above, we are well on our way to becoming the Society for Classical Studies in both word and deed.

Update on Change of Association's Name

The conference "Contact, Colonialism, and Comparison" will take place over Zoom April 16-17, 2021. Please visit the event page here for further information, including a tentative schedule and list of participants. Conference papers are being made available to participants in advance, and sessions during the event itself will begin with an introductory contribution from a respondent followed by a brief author response and then open discussion. If you'd like to register for the conference, please fill out this online registration form to receive access to the papers as well as a Zoom link closer to the date.

CFP: Annual Meeting for Postgraduates in the Reception of the Ancient World (AMPRAW

AMPRAW is an annual conference that is designed to bring together early-career researchers in the field of classical reception studies, and will be held for the tenth year. It aims to contribute to the growth of an international network of PhDs working on classical reception(s), as well as to strengthen relationships between early career researchers and established academics.
AMPRAW 2021 will be held at Columbia University in the City of New York (USA) from Thursday, November 11 to Saturday, November 13, 2021, in collaboration with the Department of Classics at Columbia University, the Institute for Comparative Literature and Society (ICLS), the Graduate School of Arts and Sciences, and Columbia University Libraries Journals.
Due to the unpredictability caused by the COVID-19 pandemic, we are not yet able to confirm that the conference will take place in person. We hope that this will be possible; however, we are also making plans to accommodate a hybrid or online-only event. We will keep you updated as the situation evolves. Please be aware that, if the conference will be in person, we are unable to guarantee travel reimbursements to speakers, but we might be able to offer support on a need basis. 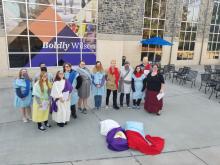 Our fourth interview in the Contingent Faculty Series is a virtual conversation between Joshua Nudell and Dr. Bonnie Rock-McCutcheon. Dr. Rock-McCutcheon received her Ph.D. from The Ohio State University, where she wrote a dissertation on the role of spectacle in gifts to Delian Apollo in the Archaic period, before becoming a Lecturer of Classics at Wilson College in Chambersburg, PA. Her current research focuses on sociality with the gods, the role of gender in myth, and the use of graphic novels in the classroom. She was recently featured in an episode of the Creators Unite podcast, talking about her experiences using comic books and graphic novels in the classroom. When not teaching a wide range of courses for both the history and classics programs, Dr. Rock-McCutcheon spends time with her three cats and quilting.

Joshua Nudell: When we talk career pathways, there is, at least in theory, a formula for how one lands a tenure-track job, but less discussion of how one makes a path as a contingent faculty member. What was your journey into your current position?