A few years ago, I adopted the Anthology of Classical Myth, edited by SM Trzaskoma, RS Smith, and S Brunet (Hackett, 2004), for my Greek and Roman mythology course. And so, some months before the start of the semester, I read through the text, in order to familiarize myself with the selections. At the same time, I began to read the “Percy Jackson and the Olympians” series by Rick Riordan. I was amazed by the degree to which the two complemented each other. I like to drive home to my students the point that writers in antiquity did not feel obligated to adhere to one particular version of a myth (for example, the various depictions of Prometheus by Aeschylus, Hesiod, and Plato), and in fact both retained certain details and also made certain changes based on their literary agenda. Part of the delight, therefore, in reading renditions of Greek myth, both ancient and modern, lies not in labeling departures as “wrong,” but in comparing them with other versions and investigating why a particular detail was included or why a particular change was made—for example, why, in the Disney “Hercules” cartoon, is Hercules the son of a happily married Zeus and Hera, and why is he adopted on Earth by the farmer, Amphitruo, and his wife? I would argue that a successful adaptation leads its audience to make such comparisons and engage with the very nature of Greek and Roman mythology. By that definition, Riordan’s latest series, “The Heroes of Olympus,” is extremely successful, especially in its depiction of the Underworld.

One of the plotlines of the fourth book of that series, The House of Hades (first US paperback edition, 2015), follows Percy Jackson, the son of Poseidon, and Annabeth Chase, the daughter of Athena; in Riordan’s interpretation, Athena, one of the three notoriously virgin goddesses, has children (the interested Classicist will have to read the first series, “Percy Jackson and the Olympians,” to discover how this is possible). The House of Hades (hereafter HH) follows Percy and Annabeth as they make their way through Tartarus—here described as an evil pit where monsters dwell—in an attempt to foil Gaea’s plans to unseat the Olympians. Modern students often complain about the many different, and somewhat vague, descriptions of the Underworld to be found in ancient texts. Riordan’s account can be compared favorably with those of Hesiod, Homer, and Vergil, and is in some ways more consistent (indeed, Riordan invites such comparisons with statements like “As she fell, Annabeth thought about Hesiod, the old Greek poet who’d speculated it would take nine days to fall from earth to Tartarus,” HH 33). The characterization of Tartarus itself shows great sophistication. From the start, Annabeth becomes “certain they were walking across a living thing. This whole twisted landscape— the dome, pit, or whatever you called it—was the body of the god Tartarus . . . Just as Gaea inhabited the surface of the earth, Tartarus inhabited the pit” (HH 161-62). As the heroes progress, they encounter different “body parts,” reflected in the terrain. For example, when they travel down a gloomy slope, “Annabeth had a nasty feeling they were marching straight down [Tartarus’] throat” (HH 175, original emphasis). Later on they enter a forest with trees “like monstrous hair follicles . . . with our luck, Annabeth thought, we’re marching through the armpit of Tartarus” (HH 184). And later still, “Percy figured they must be on the bottom of his foot—a rough calloused expanse where only the most disgusting plant life grew” (HH 355). Eventually, once they have reached the literal heart of the underworld (“the ground glistened a nauseating purple, pulsing with webs of veins,” HH 449), Tartarus’ consciousness appears, pointing out that “this form is only a small manifestation of my power” (HH 473; for some reason, particularly nasty creatures in Riordan’s Underworld speak in italics). Hesiod similarly portrays Tartarus, in different parts of the Theogony, as both a place and a personification (for more, see Timothy Gantz [1993], Early Greek Myths, Baltimore: Johns Hopkins University Press, pp. 3ff). But Riordan makes this dichotomy explicit, and has thus very cleverly dealt with the ancient conception of the gods as both anthropomorphic entities and also as the embodiments of their realms. I can certainly foresee supplying these passages to future students as a clear and accessible explanation of this rather difficult idea.

During their travels in Tartarus, the demigods encounter another, particularly intriguing monster: “The creature looked almost exactly like [a Fury]: a wrinkled hag with batlike wings, brass talons, and glowing red eyes. She wore a tattered dress of black silk, and her face was twisted and ravenous, like a demonic grandmother in the mood to kill” (HH 185). Many more of them appear. Annabeth asks their identity: “ ‘The arai,’ hissed a voice. ‘The curses.’ ” These arai do not appear in the Underworlds of Hesiod, Homer, or Seneca tragicus, although Vergil has Aeneas see “vengeful Sources of despair” (ultrices Curae, Aeneid 6.274) and Dido appeals to “vengeful Furies” (Dirae ultrices, Aeneid 4.610). Of course, this Greek word, arai, should not be confused with the Latin ara, meaning “altar,” although coincidentally Percy and Annabeth do come upon an altar dedicated to Hermes in the Underworld (HH 162). 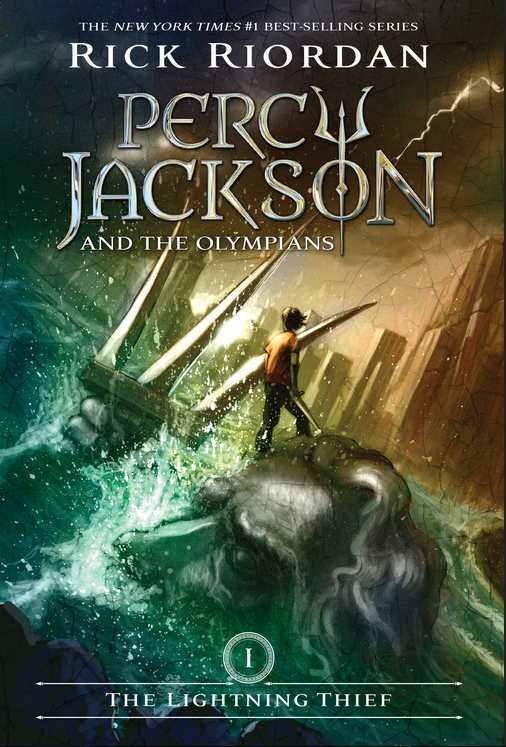 The mission of the arai is “To curse you, of course! To destroy you a thousand times in the name of Mother Night” (HH 185). It turns out that each one represents a monster that had previously been defeated by either Percy or Annabeth. In their own words, “We serve the slain who prayed for vengeance with their final breath” (HH 228). Killing an ara causes a demigod to experience the monster’s death, both physically and emotionally. The first to fall carries the curse of Geryon, whom Percy had previously defeated by shooting an arrow through all three of his bodies. Upon the death of the ara, Percy himself begins to bleed as if he had been pierced. Unfortunately, both he and Annabeth had killed many, many enemies, each wanting to pass their final suffering onto their slayer. In the end, the demigods triumph, through a combination of physical strength, perseverance and cleverness.

These arai seem to share job descriptions with the Furies: to punish those who have committed great perceived wrongs. This connection also occurs in the ancient sources. Aeschylus has the Furies identify themselves collectively as Arai (e.g., Eumenides 417 and Seven against Thebes 70), while Sophocles refers to Ara in the singular as the personified goddess of destruction and revenge (e.g., Electra 111, Oedipus at Colonus 1375, and Oedipus the King 418). It should, then, come as no surprise that Riordan’s two groups of vengeance seekers resemble each other. Before the arai identify themselves, Annabeth makes the comparison explicitly (“Annabeth’s first thought: The Furies” HH 185, original emphasis), but reasons that “they couldn’t be Furies, then. There were only three of those, and these winged hags didn’t carry whips” (HH 185, original emphasis). The idea that there are only three Furies, called Allecto, Megaera, and Tisiphone, seems to be a particularly Roman concept, with the names first appearing in the Aeneid. This is intriguing, because the “Heroes of Olympus” series itself deals with the animosity between two sets of demigods: the children of Greek deities and those of their Roman counterparts. Riordan imagines a world where the Olympians suffer from a form of schizophrenia, with, for example, the father of gods and men spending time as both Zeus and Jupiter. Apparently, the offspring of the Greek identities are kept apart from those of Roman descent, to the extent that the very existence of the Romans is a closely kept secret in the Greek camp. And evidently, even though Percy and Annabeth belong to the Greek camp, in this they follow the Roman tradition.

The fact that, according to Annabeth, the Furies are armed, while the arai attack with claws and memories, may seem inconsequential. But indeed this points to a major difference in the modi operandi of the two groups. The Furies work together, en masse, to punish their prey for one specific crime, often employing threats and insults—imagine if one of Orestes’ pursuers represented the actual murder of Clytemnestra, another the violation of her hospitality by killing her while a guest in the palace, a third her being prevented from giving Aegisthus a proper burial, etc.! Their use of weapons in Riordan’s world matches their anonymity, allowing them to attack from relative distance. The arai, on the other hand, act as individuals and like to get up close and personal. It just so happens that Percy and Annabeth have killed many, and so have accrued multiple curses. This is usually not the case in antiquity, where even someone like Heracles, who admittedly wronged many over the course of his life, is able to atone for his crimes as they come, and so does not build up a massive collection of curses. It makes sense, then, that Riordan has chosen to employ, not the more unified and anonymous Furies, but instead these personalized, and personified, arai.

I have one additional observation to make concerning the word ara. Euripides sometimes uses it to mean “curse,” like Aeschylus and Sophocles, as at Medea 607 and Orestes 996. But elsewhere (e.g., Orestes 1233 and Phoenissae 1364) the word seems more ambiguous. Particularly, in the Hippolytus, Aphrodite, Theseus, and Artemis all use ara in reference to the three “wishes” that Poseidon once promised to Theseus (Hippolytus 43-46, 887-90 and 1315-17). The sea-god’s son uses one of these wishes to bring about the death of his own son, Hippolytus, making “curse” an appropriate rendering in this particular case. The scholion to the Hippolytus states, however, that Theseus uses the other two arai to escape from the Underworld and the Labyrinth, respectively. True or not, “curse” is hardly the proper translation for these gifts. Further, although the arai of Theseus are not mentioned again in extant Greek, they do make it into Latin. Cicero renders them as optata (literally “desired things,” de Officiis 1.10.32). Ovid blames the death of Hippolytus on a “hostile prayer” (hostili prece, Metamorphoses 15.505). And Seneca tragicus refers to the three together as vota (“prayers,” Phaedra 942-43), and the specific one which leads to Hippolytus’ death as supremum numinis munus (“the deity’s final gift,” Phaedra 949-50). It seems, then, that in connection with Theseus, like Percy Jackson a son of Poseidon, the Greek word ara is better taken as a “prayer,” or in general as a request from a mortal to a god. In the end, Percy and Annabeth are rescued from the arai when the Titan Iapetus (aka “Bob”) is able to destroy them all (HH 241). But perhaps, like two of the arai of Theseus, a few of Percy’s curses might have been more beneficial if they had survived (see further Thomas D. Kohn [2008], “The Wishes of Theseus,” TAPA 138: 279-92).

By now it should be clear that Rick Riordan has been quite successful on many levels with his novels about Percy Jackson. Not only are the books fun and exciting to read, they also engage with Greek and Roman mythology in interesting and intelligent ways. Like the writers of antiquity who took the common stories and adapted them for their own purposes, Riordan has adopted the concepts of Tartarus as the embodiment of the Pit and of requests for revenge and interpreted them in such a way that evokes discussion in his modern readers. As such, it is to be hoped not only that readers of Percy Jackson turn to Classics, but also that Classicists might pay more attention to the adventures of these modern-day demi-gods.

Thomas D Kohn is associate professor of classical studies at Wayne State University. He has published extensively on ancient theatre and performance criticism, including his 2013 book The Dramaturgy of Senecan Tragedy. He can be reached at tdkohn@wayne.edu.