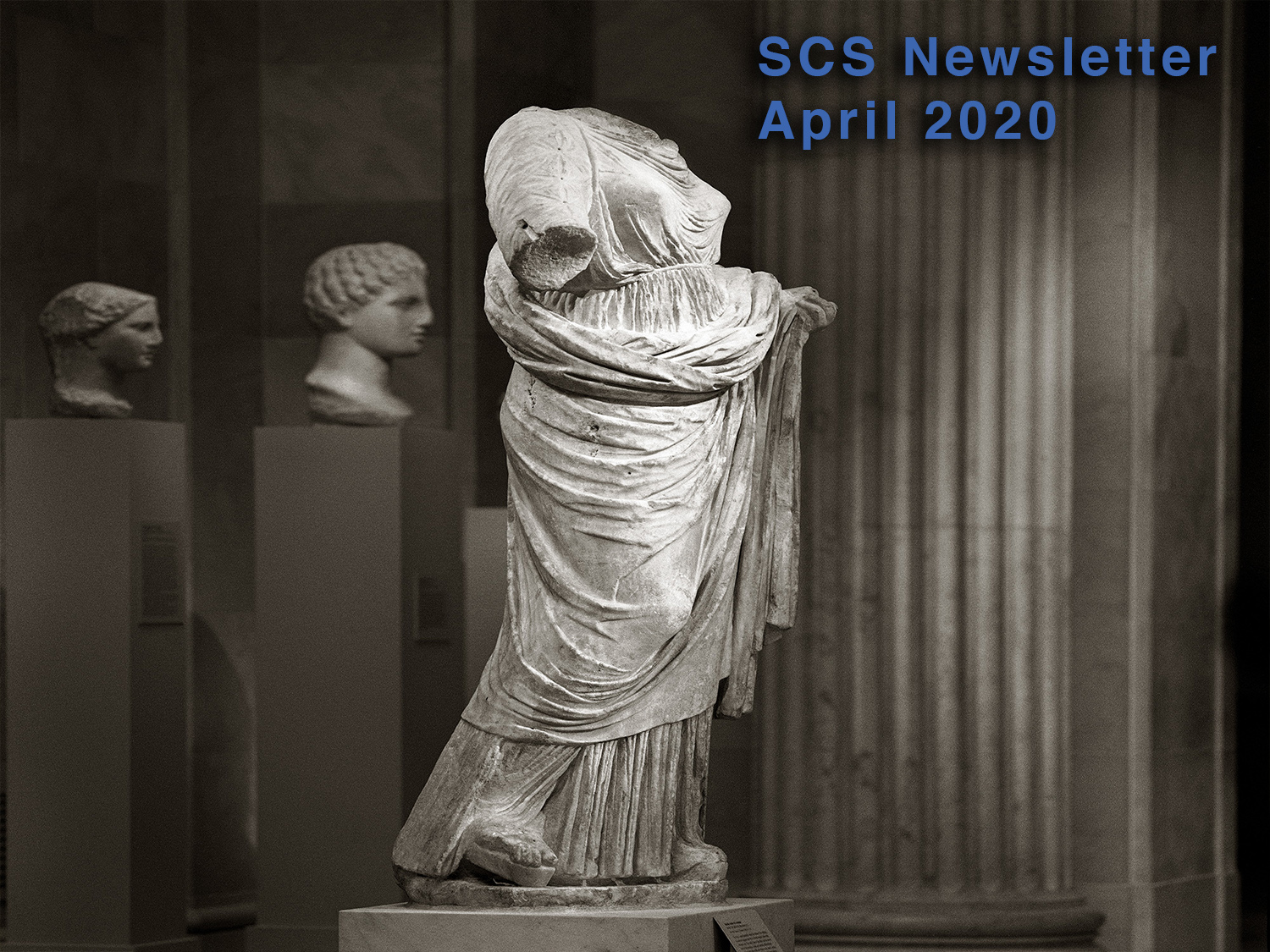 As we did last year, we are releasing a set of preliminary data from the SCS Placement Service. These data include numbers from the beginning of the Placement season in late Summer of 2019 up to April 2nd, when the last portion of Placement Service data was downloaded.

This report contains vital information about the classics job market. Please read all the way to the end, in which I conclude with some notes about how COVID-19 has affected the market this year and what we can do moving forward.

Below is a summary of our findings for an at-a-glance sense of how the placement year is progressing. Obviously these numbers represent an interim snapshot of the placement year. COVID-19 has made a major impact on job postings and prospects, as described in more detail later in this report. You can download the set of de-identified data here.

There were 320 candidates who filled out candidate profiles on our website this year with at least their names, and 535 people were signed up to receive email notifications via the Placement Service listserv, compared to 610 last year. Do note that, in order to fully comply with GDPR, we only require an email address from Placement Candidates; all other information is voluntary, which has led to a decrease in full responses over the years and has inevitably affected the data. Email subscriptions continue to decline as more Placement materials are made public, but the response rate is a minor increase from 2019, where 308 filled out profiles, but a decrease from 2018 when the number was 445. End of year numbers are obviously larger for both years. Percentages below refer to the number of people who answered the demographic questions asked, not the percentage of 320 total possible respondents who could have answered.

Non-tenture track faculty continue to represent the majority of job seekers (57.6%), with graduate students being the next largest category (25.1%).

There are a few missing "Candidate Race" variables (i.e. Aboriginal Peoples (Canada), American Indian or Alaska Native, Black or African American, and Native Hawaiian or other Pacific Islander) because no candidates who filled out their profiles self-identified as those races. Again, this category is optional, and so does not likely present a comprehensive view of candidate racial breakdown.

There were, as of April 2nd, 75 contingent faculty positions (adjunct/part-time, and non-tenure track, up to and above 12 months) and 54 tenure-track or tenured positions posted on the Placement Service, with 7 being classified as “open.” At 135 total jobs, this is far above last year’s number of 113 around this same time. The number of tenure track jobs has increased twelve total jobs from 42 last year. These numbers do not reflect the cancelations caused by the COVID-19 pandemic.

It remains true from the last two years that categories regarding job rank and specialty have increasingly become less and less useful to describe the types of jobs that are being placed on the job board. Institutions now tend to post either a Generalist position or write in their own specialty to match a specific need at their university, rather than classify the desired research specifications of their desired applicant. Similarly, universities have taken to redefining job rank so that titles are no longer so firmly tied to the type of position. In other words, an “assistant professor” no longer indicates a tenure-track position 100% of the time, and the same goes for other ranks. This has been creeping into the data for the past few years, and I have decided to no longer include position type in the written report, as it is getting less and less meaningful than simply reporting the actual responsibilities expected in a job. Anyone wishing to access this information can analyze it for themselves from the raw data downloads included in this report.

Respondents to the survey skewed slightly more female than those who filled out candidate profiles on the SCS website (54.6% compared to 48.7%)

When asked if they intend to pursue employment outside of teaching at the college level “I don’t know yet” (44.7%, down from 57.0% last year) remained the most popular choice, followed by “secondary education" (27.1%), other, and academic administration (22.4%)

Interviews at the Annual Meeting [Assessed as of April 2, 2020]

NB: As last year, these numbers are what were submitted to the system before the annual meeting, and so do not reflect any last-minute changes that occurred.

17 institutions (16 plus the SCS TLL Fellowship) interviewed at the annual meeting, down 1 from last year.

The average shortlist size was 8 – down from 9 last year and 12 year before – with the shortest being 4 and the largest being 16.

Of the 320 candidates who filled out their candidate profile, 151 got interviews at the annual meeting. This is 47.2% of candidates, up from 43.2% last year.

35 candidates had more than one interview at the meeting, with five being the highest number of interviews for one person.

Normally this portion of the report would be reserved for a representative summary of the comments written to the SCS office in the annual Placement Survey. This year, however, the comments in regards to actions, infrastructure, and policies of the SCS Placement Service were largely positive.

Far more frequent were continued pleas to the SCS about institutions. Namely, many candidates would like to see colleges and universities: (1) move toward a more consistent slate of application materials; (2) increase their usage of Skype and other video communications software for the first round of interviews;  and (3) see an increase in contact between search committees and prospective candidates.

Institutions vary widely in their policies regarding all three of these issues, sometimes at the departmental level and sometimes as far up as the highest levels of administration. SCS is unlikely, on its own, to be able to change university-wide policies and procedures.

Two major changes have occurred in the past academic year that we'd like to flag. First, there has been consensus in the SCS membership, the Career Planning and Development Committee, and in the Placement Office itself that the decrease in job interviews at the annual meeting over the past few years – with this year being particularly noticeable due to the increase in total jobs but decrease in on-site interviews – signals that the SCS should begin purposefully winding down the practice of allowing interviews at the annual meeting. This will take place over several years to acclimate candidates and institutions to the change, and the Placement Office will be providing guidance from the Committee on more precise details later this year.

Second, the continued menace that is COVID-19 has led to the suspension and cancelation of searches across the United States and beyond. The Placement Office is doing its best to keep up, but we encourage departments to email the Placement office (info@classicalstudies.org) as soon as they know a search is no longer happening.

For the candidates: I am truly sorry that an already difficult time and process has been made all the more difficult by a once-in-a-lifetime event. I will attempt to get clarity where clarity can be gained, but by and large each cancelation is meaning different things for different institutions. The meaning of “suspension” is falling anywhere on a sliding scale of "the job will happen, we just can't move forward in the process for a month" to "it's unclear whether we'll even have a department next year." Currently, five searches have informed the SCS office that they've been suspended or canceled, but that number is likely much higher, and we continue to encourage departments to contact us about suspended or canceled searches. Again, I will provide the information I have when I have it, but I ask patience, understanding, and, for all of us, some courage.

Those interested in looking beyond the academy should consider joining the Career Networking for Ancient and Classical Studies LinkedIn group: https://www.linkedin.com/groups/12362080/. This group represents the SCS's increased commitment to ensuring that all career options are not just encouraged and available for Classicists, but are accessible, both in terms of learning how to find these opportunities and in making helpful connections with those already in these fields. Another story in this Newsletter provides more detail about how to network on LinkedIn successfully.

If you have any suggestions for the data that you would like to see or the way in which these data are presented, please contact info@classicalstudies.org or reach out to the Placement Service Coordinator Erik Shell at erik.shell@nyu.edu.