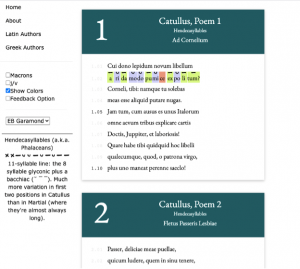 Hypotactic.com is a website that provides open-license metrical scansions for a broad range of Greek and Latin texts. The main project interface, while relatively simple in its design, supports the user in reading ancient texts metrically through a variety of customizable annotations. The user can toggle between various display formats, including the addition of macrons, scansion, and marks for foot-breaks and/or caesuras. Particularly helpful for reading aloud is the innovative option to apply color-coding that highlights metrical units (and elisions) without the need to consult a separate line of metrical annotations.

Figure 1: Clicking on a line reveals the metrical analysis.

In metrically complex texts, such as Plautus or Pindar, every line is annotated with its metrical identification (e.g., ia6 for iambic senarii), such that transitions between meters are obvious to the reader without having to consult a separate commentary.

Figure 2: Plautus Poenulus 207–220 with indications of the metrical scheme to the right of each line.

For Homer’s Iliad, the website also offers integrated audio recordings that can be played in conjunction with the annotations: if you set the audio to “continuous” and click on a line, you can hear whole passages read in sequence, with each line’s metrical annotations appearing as that line is read.

The project reflects years of work by David Chamberlain, who has singlehandedly processed all the texts through a combination of digital and traditional methods. While still a work in progress, the database includes an extremely wide selection of texts, especially as regards Latin. (As Chamberlain writes, it includes “pretty much all of non-fragmentary Early, Classical and Silver Latin verse.”)

Among the Latin texts, it is especially useful to have resources for reading Catullus, Horace, and Roman drama, in light of their complex and varied metrical designs. While the choice of Greek texts is currently more limited, it is still considerable. Hexameter authors are especially well-represented: all of Homer, Hesiod, the Homeric Hymns, Callimachus’ Hymns, Apollonius, and Theocritus are available, along with many lesser-known hexameter authors (e.g., Bion, Cleanthes, Moschus, and the Batrachomuomachia, to name only a few). This breadth could be especially useful for understanding diachronic patterns and influences. There is also a range of elegiac and iambic texts (e.g., Semonides, Solon, Theognis). While drama and lyric are more limited, due to the difficulty of processing these metrically complex texts, one can view full metrical data for all of Pindar’s victory odes and several Aeschylean tragedies.

The innovative display of Greek song arranged in stanzas (currently limited to Pindar and Aeschylus) is especially valuable. In addition to having scansion and metrical identifications readily available while reading, responding stanzas are presented side-by-side, making it possible to consider the metrical/musical connection between different texts. 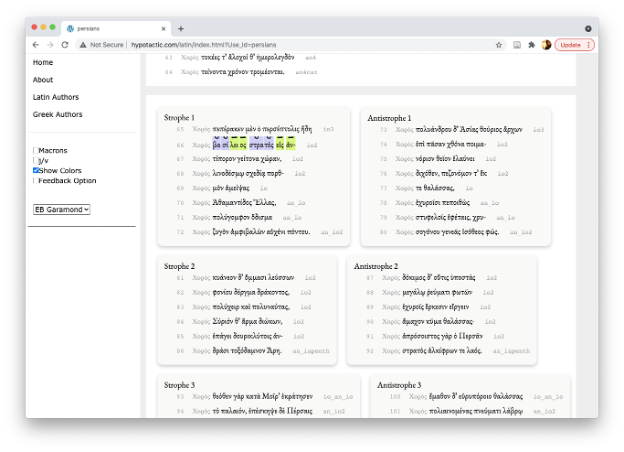 This is a great improvement over standard editions, where the continuous flow of text obscures the repeating musical structure that would frame the lyrics in performance. In the case of Pindar, Chamberlain has included options to highlight variations in responsion across the course of multiple stanzas (e.g., metrical positions that are occasionally resolved, or the substitution of short and long syllables). This is an important new resource for both students and scholars of Greek lyric and will become increasingly valuable as more lyric texts are added.

Digital scholarship has the potential to revolutionize and revitalize the study of ancient metrics. Chamberlain’s initiative is just one of many projects exploring this area. For students learning to scan, Hexameter.co offers sophisticated practice tools. For scholars, there are several databases, mostly addressing Latin verse:

Hypotactic.com stands out for presenting its data in a format that is intuitive for the reader, rather than solely aimed at the researcher. Moreover, while the site does not offer any built-in tools for analyzing statistics (the central feature of Pedecerto and The Meters of Roman Comedy), the underlying data is itself accessible as HTML (see download instructions here), such that others could calculate any number of statistics from it. While the current methods for accessing the source data are somewhat cumbersome, a recent post on Chamberlain’s blog announces that he is working to transition his metrical data into xml files that can be combined with the syntactic and morphological analysis of the Perseus Project’s Ancient Greek and Latin Dependency Treebank.

Providing a sound basis for future work is a central pillar of Hypotactic’s design and execution. The texts themselves are sourced from editions in the public domain, with Latin generally adopted from the Latin Library and Greek from the Perseus Project’s GitHub repository. (The exception is the texts of Plautus and Terence, which Chamberlain has edited substantially and offers as new open-access editions.) The metrical data, in turn, is all based on these open-access texts, with the result that the complete database can be incorporated into future open-access initiatives without any cost or explicit permissions (CC-BY 4.0).

This emphasis on openly licensed materials is valuable and necessary, but it does make Hypotactic.com subject to the same textual issues as other open-access digital databases. In particular, the public domain texts are often outdated, and this issue can be especially pertinent when it comes to meter. Chamberlain’s editorial efforts have done much to alleviate the textual and metrical problems while maintaining the open license, but the resulting texts necessarily differ from any standard edition. Full documentation on the changes is not yet published on the website, though the conspectus lectionum at the end of Chamberlain’s Aeneid edition provides a sense of the extremely detailed spreadsheets in development.

Once complete, this detailed documentation will put Chamberlain’s texts on a more solid footing than either the Latin Library or the Perseus project. This consistent integrity in the development of digital data provides a solid basis for a body of evidence that will likely be central to future work on Greek and Roman metrics. Even as a work-in-progress, however, the innovative display functions and the wide-range of openly available metrical data make Hypotactic.com an extremely valuable resource for both students and scholars of ancient verse.

TITLE: Hypotactic.com: A Metrical Database of Greek and Latin Verse

DESCRIPTION: metrical annotations for a wide range of Greek and Latin verse. In addition to the raw data, the reader-interface digitally augments texts with visual and audio resources related to meter.

RIGHTS (license restrictions imposed on access to a resource): CC-BY 4.0

Anna Conser teaches Classics as a Visiting Assistant Professor at Whitman College. Her current research addresses the musical design of ancient Greek drama, which she views as integral to their literary interpretation. As part of this project, Anna has developed digital tools for scanning Greek meter and for reconstructing melodic rises and falls based on pitch accent patterns (https://github.com/aconser). For details on this approach, see her 2020 article, “Pitch Accent and Melody in Aeschylean Song”, GRMS 8.2 (https://brill.com/view/journals/grms/8/2/article-p254_4.xml). Anna's research on ancient music stems from her practical experience as a director, choreographer and composer for modern performances of ancient drama.

07/01/2022
Blog: Ancient Worlds, Modern Communities: Contemporary Responses to Greek Myth and Tragedy through Drama, Film, and Visual Art
The Ancient Worlds, Modern Communities initiative (AnWoMoCo), launched by the SCS in 2019 as the Classics...
06/29/2022
Blog: “Deeply rooted in history”: Teaching abortion ancient and modern in a post-Roe v. Wade world
With weary hearts, we consider with you what Classics can do in the face of Dobbs v. Jackson Women’s Health...
06/27/2022
Blog: Teaching in a Time of Anti-Asian Violence: Reflections on Asian & Asian American Experiences in Classical Studies, Part 1
This two-part series reflects upon AAPI experiences in Classical Studies. Part 1 is catalyzed by the author’s...
06/25/2022
Blog: Roe v. Wade, the GOP, and echoes of Augustus: Reproducing fascism
I guess I should say “thank you.” Gratias vobis ago. Thank you to the Republican Party’s long game, a partisan...
06/20/2022
Blog: Paternalism and the “Good Slave” in the Speech for Phormion and the Legacies of Slavery
In a discussion of the concept of the “good slave” in her book Reconstructing the Slave: The Image of the Slave in...
END_OF_DOCUMENT_TOKEN_TO_BE_REPLACED