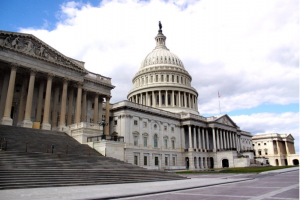 While in broad strokes these statements may seem correct, they take serious liberties with both classical and federal traditions. In fact, although the statements reference both traditions, they are grounded in neither.

I am not going to try to list the absurdities of evaluating proposals for multi-million-dollar government contracts based on vague metrics like “beautiful.” To borrow a phrase from Jonah Goldberg’s evaluation of a different aspect of the Trump administration, to do so “would be like trying to list all the reasons 2 plus 2 does not equal a horse.” Also, none of the document’s specific examples of prioritizing beauty in civic architecture come from the classical world (although the order does claim that L’Enfant designed Washington, D.C., “as a classical city”). I have no idea what constitutes “a classical city” in terms of design, any more than I know what an “American city” or an “Indian city” design would be, but I presume this references L’Enfant’s promotion of Hippodamian orthogonal principles, which is merely a fancy way of saying that the streets run at right angles — except, of course, when they don’t. Others more qualified than me have addressed the extensive, complex, and often tragic history of classical architecture being used as a weapon of colonial dominance.

The executive order references several classical cultures, but I am going to focus on the Romans, because they had a strong influence on the thinkers that created the institutions Trump honors. The Founding Fathers were very clear that they were not founding a Greek democracy, but a Roman republic. This made sense: as rich elites, the Founding Fathers were interested in a system where theoretically all citizens could have a political voice, but only certain classes of people had those voices heard at the ballot box, and still fewer in the halls of power. There is a reason that Alexander Hamilton wrote under pen names such as Publius and Camillus. More specific to architecture, the building that houses the American government is called the Capitol for its connection to the Capitolium, the religious and political center of the city of Rome. When Thomas Jefferson looked for inspiration for his home Monticello, he chose the Pantheon in Rome, not the Parthenon in Athens.

The ancient Romans were very much aware of the symbolic power of architecture. They understood that certain building types and styles of architectural decoration carried cultural references and could work as hallmarks of a particular society or social order. They recognized that certain architectural types (e.g., amphitheaters), plans (temples with large front porches), and decorative styles (Corinthian-style columns on those porches) were associated with Rome, at least by the end of the Republican period. Together, these architectural features served to mark a building as “Roman” in spirit, in much the same way that a cowl, a mask with bat ears, and a winged symbol let you know that a character is Batman, regardless of whether you are watching Michael Keaton, George Clooney, or Ben Affleck. But how did Romans use these architectural hallmarks?

Let us look at some examples where it is very difficult to explain away the use of Roman architectural hallmarks as concerns of aesthetics or logistics. The first is the Temple of Olympian Zeus in Athens. When this temple was begun in the 6th century BCE, it was slated to be one of the largest buildings in the world. Unfortunately for Athens, it was too big to finish, and so the temple sat, incomplete, for over 600 years, until the Roman Emperor Hadrian oversaw its completion starting in 125 CE. Although Hadrian was and is famous for his supposed love of all things Greek, when the temple was finished, there had been some important changes in its design. The Hadrianic renovations kept the temple’s original immense size and layout, including the screens of columns on all four sides of the building, a design that was traditionally Greek and ran contrary to Roman religious practice. But those 104 columns were now topped with Corinthian capitals. Although ancient Greeks invented the Corinthian column style, they traditionally used this elaborate, expensive type only inside temples, near the statues of the gods. Roman temples, on the other hand, used Corinthian columns everywhere, inside and out. 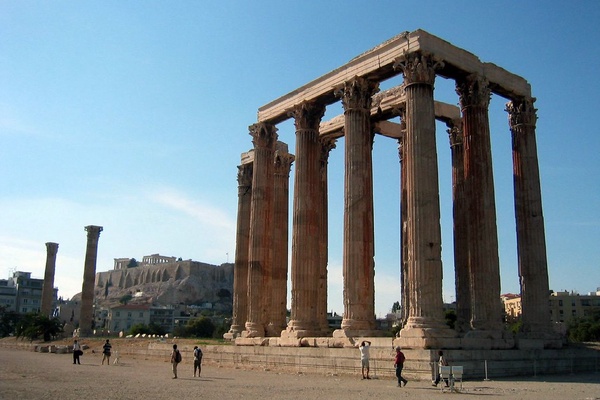 Thus although the philhellenic Hadrian restored the great unfinished temple of Athens, and used a Greek plan to do so, the exterior used a style that had become a Roman signature — and in a way that a culturally Greek audience would once have found tacky at best, and profane at worst. Hadrian certainly would have known this. This was no meaningless design decision or careless mistake. When a resident of Athens looked over their city from the famous Parthenon, the largest building they would see would be a visual statement of Roman dominance over the landscape of Athens.

Another example of Romans using architectural hallmarks to express their cultural dominance can be found in the heart of Rome, on the Column of Trajan. Dedicated in 113 CE to celebrate the Roman conquest of what the ancients called Dacia (modern-day Transylvania), the 125-foot-high column was covered with sculptured scenes that represented the recent wars. This was no documentary record. In the column depictions, the Romans never make a mistake, never lose a battle or skirmish, never even lose a soldier, with only two Romans shown wounded--a casualty rate that was as unbelievable to ancient audiences as it is today. 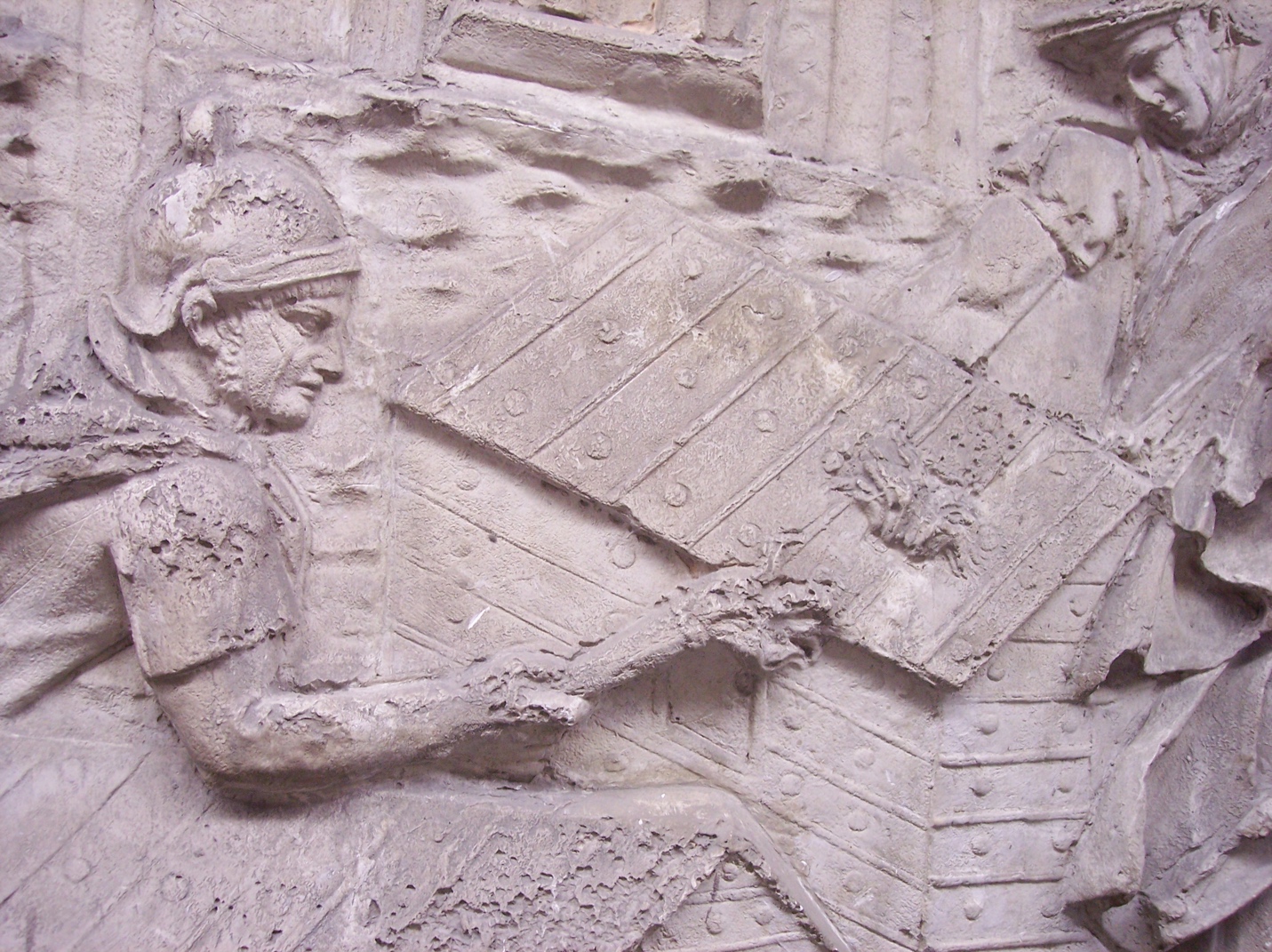 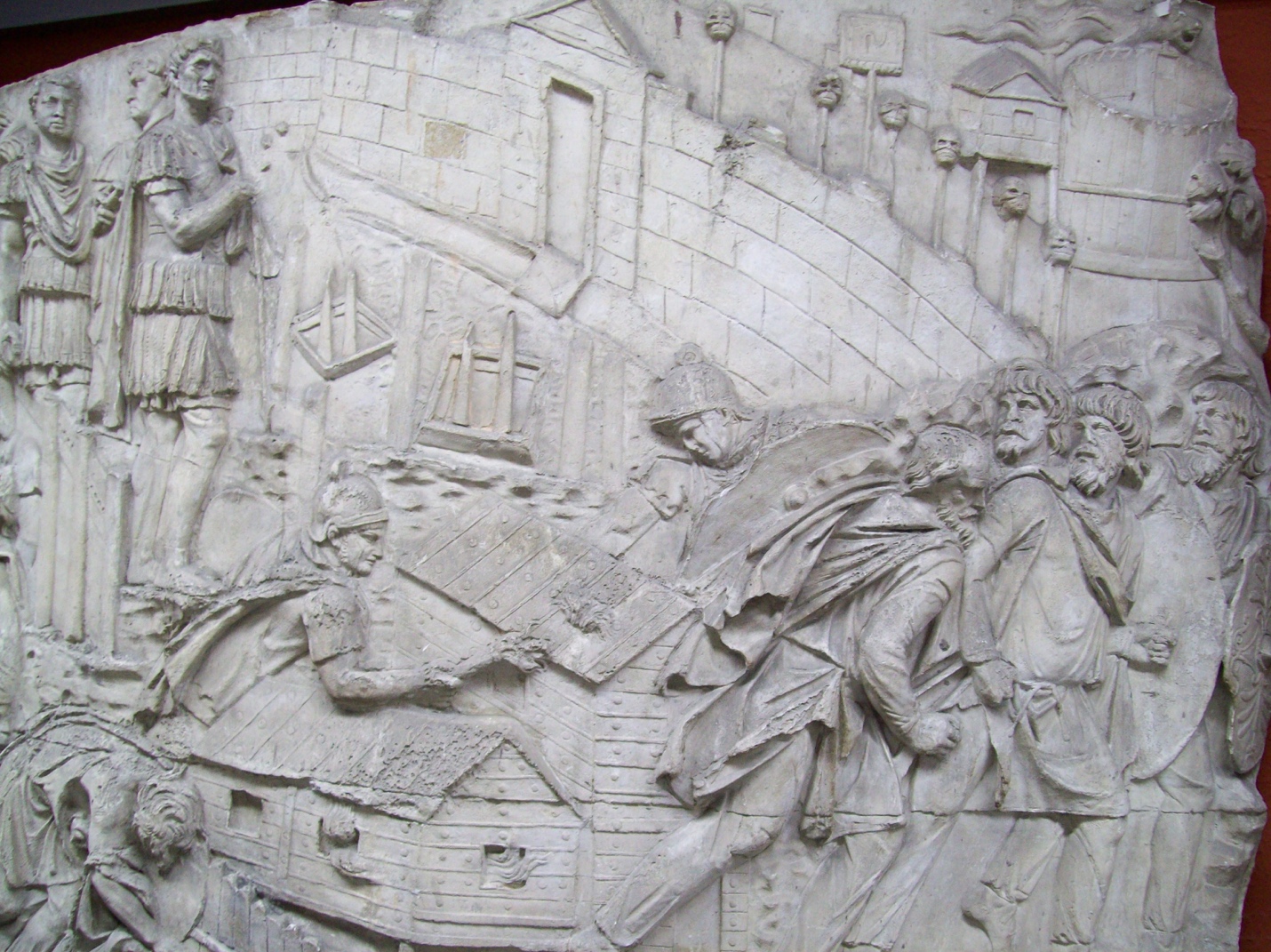 Figures 2-3: Images of the Column of Trajan Courtesy of Elizabeth Thill.

Most of the 350+ structures shown on the column are easily categorized as either Roman or “barbarian” (as the Romans termed their enemies). Neither category of architecture makes complete logical sense in its depicted context. Fortifications and towns allied with the Romans primarily sport sophisticated stone architecture, despite their representing the far edges of the empire. Numerous Roman architectural hallmarks are peppered throughout, including temples with Corinthian columns, multi-tiered theaters, and not one, but two, amphitheaters. Barbarian architecture, in contrast, is portrayed as primitive and illogical, reliant on wooden construction and strange forms like buildings on stilts with doors leading to nowhere. This architectural contrast is not much more realistic than the Roman casualty rate. Archaeology has shown that contemporary Roman towns in the Transylvanian area could only dream of the sophisticated stone architecture of the Dacian capital, Sarmizegetusa. Yet a reliable accounting of Roman versus Dacian architectural engineering was hardly the point. The point was that Rome in Dacia was here to stay, and the barbarian civilization it conquered would disappear like the wooden buildings Roman soldiers were shown burning.

To return to events of recent days: why should we care about any of this? As mobs stalk members of Congress and kill the police officers defending them, it may seem completely irrelevant how the Romans made use of Corinthian columns. But these ideas are all part of the same picture.

First of all, I didn’t bring up the use of the so-called Classical orders—Trump did. The crashing end of a presidential regime might seem a strange time for a leader to turn his thoughts to architectural style. But, as we have seen, architectural style matters. Trump knows this, and has demonstrated this in his trademarked gold-drenched, Gordon Gekko aesthetic. More specifically, architectural styles have cultural associations and can stand in for particular cultures, as the executive order itself makes clear by spelling out the connection between the Greeks and Romans and the Federalist style. If you privilege one culturally specific architectural style over another, you are privileging that culture as well. If you defend an architectural style that has come to represent a way of life, you are defending it against something you see as inimical to it.

Second of all, ancient cultures are like romantic partners: they’re a package, and if you swear allegiance to one, you need to at least acknowledge all their facets, not just the ones you happen to find convenient. It is intellectually dishonest to claim that classical architecture is somehow more desirable than other types of architecture specifically because it is tied to the Romans, and then ignore why Romans used that architectural type in the first place. (We recognize this basic principle in our laws. If you break into the White House and steal Trump’s cell phone, then sell it to the Russians, you can’t argue that the phone’s original owner and its original purpose were irrelevant.) The Founding Fathers liked classical architecture because it reminded them of the Romans, and using it in their own buildings tied them intellectually to Rome. And they liked the Romans not just because of Roman ethics of self-government, but because the Romans situated self-government within an oligarchic, plutocratic context. At the very least, the Founding Fathers were willing to accept the latter associations to get at the former.

Third of all, modern public reactions to the attack on the Capitol reveal how much we still value architecture as symbolic, right down to the details. Reports and thought pieces decrying the attack on the Capitol as a symbol of our country are hardly surprising. But read through the reports and responses, and you will see repeated references to broken windows, breached doors, people forcing access to rooms and profaning halls and rotundas. We process the violence within an architectural context. And we understand the assault on the Capitol building as an assault not just on a structure and its architectural details, but as an assault on what we understood the architecture to mean.

Some people processed the Capitol’s classical architectural associations (however they understood them) as indicating that they had some greater claim to the building than the elected individuals within. Meanwhile, some people processed those associations as examples of historical false promises of equality that enabled and encouraged the hateful rhetoric spewed by the mob. Still others likely processed those associations as bulwarks of dignity and stability that were now being overrun. The instigators of the mob, including Trump himself, knew all this at some level. They did not start their riot in the open space of the National Mall: they knew architecture would make the strongest visual impact, and they delayed their chaos until they had marched themselves to the most potent symbolic setting their insurrection could find.

The executive order concerning the architectural style of federal buildings may be new, but the cultural chauvinism that permeates it is not. Julius Caesar would approve. Cicero would approve. We need to ask ourselves if that is a good thing.

Elizabeth Thill is Program Director and Assistant Professor of Classical Studies at IUPUI. Her research focuses on the overlap of imagery and ideology in the ancient world.