Blog: Science and the Study of the Classics 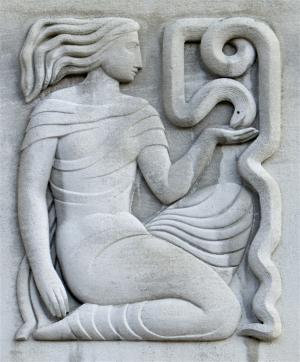 I was surprised to receive an invitation to write this blog; it was based on some passing remarks that I made last year at a meeting in Dublin on BioPharma on the valuable role that the Greek and Roman classics played in my education. I am, by way of background, a physician and a scientist at the University of Pennsylvania, where I chair a basic science department and direct an institute devoted to translation of basic discoveries into novel therapeutics and diagnostics.

I was born in Ireland, where I studied medicine at a time when a passing grade in Latin in the final high school exam was a requirement to progress to university. That is no more. Unlike the UK today, where students are streamed towards science or the arts early in their high school careers in preparation for a three-subject final exam, we competed for entry into any university course with a range of points derived from a broader range of subjects.

In my case, I arrived in my first year in medical school with no prior exposure to botany, zoology, or chemistry, and only two years of high school physics. On the other hand, I had six years each of Latin and Ancient Greek. Along with this, I had qualifications in French, Irish, English, and mathematics. I cannot claim that I viewed this as ideal preparation at the time; only one third of us were due to progress to the second year. My grandmother, whose husband taught the classics, assured me that “any fool can be a doctor.”

After more than 30 years practicing medicine and doing science, this invitation prompted me to ask myself the personal version of the famous question from Life of Brian: “All right, but apart from the sanitation, medicine, education, wine, public order, irrigation, roads, the fresh water system, and public health, what have the Romans ever done for us?”

I think my efforts at translation of Greek and Latin have rooted in my thinking attention to detail, structure, logic, and the assembly of pieces of knowledge. Science and diagnostic medicine both rely on an innate feeling for the order of things, a stitching together of clues to frame a hypothesis or interpret results, care and rigor in either experimentation or clinical investigation, and the pursuit of internal consistency between separate lines of evidence.

The second great gift of the classics to me has been the power of narrative. In science, we need to communicate our findings to our peers in talks and papers, to our funders through writing grants, and most importantly, to the public in a way that frames our discoveries honestly and in the context of the work of others. In medicine, we need again to speak clearly, with humanity and honesty to our patients. Here, the elegance and breadth of vocabulary, the clarity of narrative and structure in the poems and prose of Athens and Rome taught me the power of eloquence. The beauty and humanity of the poems of Homer, Ovid and Horace; the gradual elucidation of truth in a Socratic dialog; the precision and compelling narratives of Livy, Cicero, and Julius Caesar all have direct relevance to the pursuit of science and the practice of medicine.

Finally, classics raised my consciousness of the aesthetic, its descriptive power and contribution to narrative. The images of science—subcellular organelles, nano-strings and nanoparticles, intravital and cryo-electron microscopy, functional imaging of the brain—are things of beauty. Like the architecture of Egypt, Greece, and Rome, they add power to the narrative as well pleasure to the eye.

There are many international streams in science but education in the classics provides a linear connection in Western thought, from the astronomy and architecture of ancient Egypt, through Pythagoras of Samos, to the roads and plumbing of Ancient Rome. These achievements illustrate the fundamental connection between scientific progress, cultural development, and political expansion.

My interest in the classics has shaped my life in other ways. Most importantly, six weeks spent island hopping in Greece with my girlfriend after the first year of medical school persuaded her that sun, sea and archeology were a promising basis for a marriage of more than forty years.

Subsequently, a taste for the classics prompted visits to Luxor, Leptis Magna, Halicarnassus, Phaistos and Carthage, Delos and Delphi, allowed us extrapolation from the frescoes of the Palatine and the symmetry of the Pantheon to the ceilings of Raphael and Brunelleschi’s Dome and even to a home in Rome. It has afforded me a long view of history and of politics, not least the value in absorption of migrants, and the challenges they faced in doing so, and see how that resonates today.

All of this takes me back to my talk in Dublin where I added a slide to discuss the challenges to and opportunities for Irish science afforded by Brexit. Our biggest asset in luring investment is the quality of our human capital, and I had been shocked to read that morning that only 113 out of approximately 58,000 students sitting the final high school exam had taken Latin; Greek it seemed, had all but disappeared. Worse, according to the Irish Times, Latin was deemed the preserve of “elite” schools. Depressingly, the main reason for such attrition was a government-encouraged shift in preference to the study of science.

Ironically, as if to prove the fallacy of such zero-sum thinking, the new chief executive of the Pharma company GSK was also announced that day: Emma Walmsley, a graduate in classics and modern languages from Oxford University.

07/03/2020
Blog: What Are the Best Classics Books for Children?
Finishing my third trimester in the midst of a pandemic was not what I had planned for the last months of...
06/26/2020
Blog: Can Studying Classics Encourage Empathy and Equity?
The new Classics Everywhere initiative, launched by the SCS in 2019, supports projects that seek to engage...
06/19/2020
Blog: Creating a Coalition to Empower Classicists of Color
In 2018, a group of scholars founded Mountaintop Coalition, an SCS-affiliated group with a shared interest in...
06/12/2020
Blog: Women in Classics: Froma Zeitlin
Froma I. Zeitlin retired from Princeton University in 2010, where she was the Charles Ewing Professor of Greek...
06/05/2020
Review: Reconstructing Ptolemy and his Global Legacy
A longstanding tendency to ethnocentrism and Hellenophilia implicit in the narrative of the rebirth of Greek...
END_OF_DOCUMENT_TOKEN_TO_BE_REPLACED