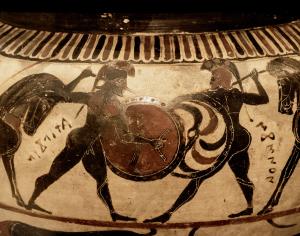 One of the precepts of Joseph Campbell’s Hero of a Thousand Faces, in fact of his life work of studying myth, generally, is that myth is truer than the truth itself. The metaphoric power of storytelling is such that the story precedes reality. When one deploys the metaphor “my love is a red rose,” the statement suggests the profound truth of the beauty of love, its exquisiteness, its sensual power.

The movie Black Panther is a red, red rose; it is mythic truth. This movie’s power is mesmerizing, its epic storytelling so real that it opens our eyes to an absence we didn’t even fully fathom was there. It tells a story of diaspora and an African pristineness that precedes compromise, corruption, and penetration. Wakanda’s Edenic purity implicitly asks what the world would be like if the Transatlantic Slave Trade never happened (The Aethiopians in the Homeric imagination occupied a place of mythic perfection, as both literature and vase painting reveal). But it offers an even more profound challenge, if there can be a contemporary question more profound than that of African slavery and its aftermath. Taking the premise that all humanity begins in Africa, Black Panther asks the mythic truth of what humanity would be like, had we never fallen to our more corrupting instincts.

Yes, more immediately the question of absent fathers or how society neglects its youth is here too, as Jelani Cobb writes of Killmonger’s “parental” separation (New Yorker, “’Black Panther’ and the Invention of ‘Africa’,” February 18, 2018). The abandonment of young Erik Killmonger might recall the context for President Emeritus Barack Obama’s “My Brother’s Keeper” initiative, or his own abandonment by an absent African father. Not coincidentally, “am I my brother’s keeper” was the question Cain asked when God searched for his brother Abel, whom Cain killed in order to rob him of his birthright (Genesis 4:9).  In a way, Black Panther rewrites the mythical curse upon Cain’s descendants, which some historical figures took to be blackness itself (e.g., Brigham Young), such that Abel, the good brother (in this case, cousin), prevails. Black is beautiful; blackness is a blessing.

Another way to see the Black Panther’s conflict with Killmonger is to make T’Challa Romulus. Like the eponymous hero of Rome, who kills his brother Remus, T’Challa’s foundation myth for Wakanda depends upon the loss of his kin. T’Challa, however, establishes this narrative of beginnings where heroes like Martin Luther King, Jr. and Nelson Mandela leave off, namely with Wakanda’s self-disclosure to the world, as opposed to the former, false story of Africa’s barbarity, which led to colonialization and conquest. While the comparison of T’Challa’s King to Killmonger’s Malcolm X might also be implicit, if read in an American context, the mesmerizing power of Chadwick Boseman’s performance is in part in his hypnotic evocation of Nelson Mandela. By the end of the movie, as T’Challa stands before the United Nations in a precursor of things to come, his accent has completely morphed him into Africa’s most recent, international icon. The first installation of Black Panther ends with hope.

In Black Panther’s truth-telling, we are not to forget the women. The characters of Nakia (Lupita Nyong’o), Okoye (Danai Gurira), and Shuri (Letitia Wright) remind us of the myth of the Amazons, which most recently graced the big screen in the form of Wonder Woman. Amazons live independently from men in their own pristine nation not unlike Wakanda in its analogy to the real world. What resonates here, however, is not the Freudian rejection of the phallic enterprise. Rather, all along the way the women of Wakanda strive toward an almost Platonic reunion of male to female, power to passivity, beauty to raw and crude physical strength. They do not merely represent female power; they are a wholeness unto themselves, one that T’Challa also embodies in his mothering of Wakanda and his refusal to fight or disclose. He weaves an intellectual tapestry of delay not unlike that of Penelope, the suitors in this case coming from the world outside of Wakanda. Black Panther does not stop with Amazonian power because it was ever only half the story; female power is as incomplete as male power (and here we might think of Carl Jung).

Certainly, we could very much continue to talk about parallels in European mythology, both Greek and Roman. I am more inclined, however, to reflect on the role of the African ancestors, or black mythology, in this film. When Africans from sub-Saharan Africa scattered across the Americas, with us came our ancestors, our gods. These ancestors have been obscured and encrypted in Western clothing, such that one of the African, Yoruba figures for sickness and healing, Omolu (Babalú-Ayé), becomes Saint Lazarus, with all attendant symbols: the pox and leprosy,  the dogs who lick his wounds, the shepherd’s staff. That said, even encrypted, Omolu and the other ancestors never left us. And they are very present in the truth of Black Panther.

Ancestors are not only present in the way that T’Challa and Killmonger call up their fathers from the dead, as they transition into power and self-knowledge, much like Achille in Derek Walcott’s Omeros calls up Afolabe from the waters. In a real sense, the characters are also the embodiment of those ancestors. In his inventiveness and power, T’Challa is the god Ogun, who gives iron to mankind and then is present in the steel mills of Pittsburgh though the Great Migration (as, for example, in August Wilson’s Joe Turner’s Come and Gone). In his dependency on women like his sister Shuri (the real inventor) and the other female warriors, T’Challa is also Omolu, who does not know his true beauty until Oshun touches him.

These ancestors, and others, represent the syncretic, pan-African melding that shapes the diaspora and then winds its way back to Africa. The ritual worship of these gods also involves a trans-sensibility, as men and women alike gain access to their power through embodiment, whenever they are ritually celebrated across South and North America. The trance-like truth of Black Panther is in the possibility of these ancestors, even in a Disney world. Black Panther  is the truth that many have been waiting for.

07/01/2022
Blog: Ancient Worlds, Modern Communities: Contemporary Responses to Greek Myth and Tragedy through Drama, Film, and Visual Art
The Ancient Worlds, Modern Communities initiative (AnWoMoCo), launched by the SCS in 2019 as the Classics...
06/29/2022
Blog: “Deeply rooted in history”: Teaching abortion ancient and modern in a post-Roe v. Wade world
With weary hearts, we consider with you what Classics can do in the face of Dobbs v. Jackson Women’s Health...
06/27/2022
Blog: Teaching in a Time of Anti-Asian Violence: Reflections on Asian & Asian American Experiences in Classical Studies, Part 1
This two-part series reflects upon AAPI experiences in Classical Studies. Part 1 is catalyzed by the author’s...
06/25/2022
Blog: Roe v. Wade, the GOP, and echoes of Augustus: Reproducing fascism
I guess I should say “thank you.” Gratias vobis ago. Thank you to the Republican Party’s long game, a partisan...
06/20/2022
Blog: Paternalism and the “Good Slave” in the Speech for Phormion and the Legacies of Slavery
In a discussion of the concept of the “good slave” in her book Reconstructing the Slave: The Image of the Slave in...
END_OF_DOCUMENT_TOKEN_TO_BE_REPLACED