Blog: Domestic Violence in Ancient Rome and Game of Thrones 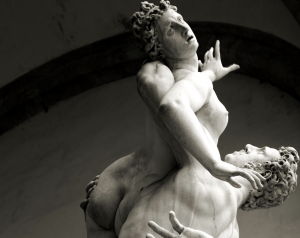 Friends, Romans, Countrymen, I want to talk about domestic violence and Game of Thrones.

Game of Thrones has always had a woman problem: naked women used as set dressing, “sexposition” (the exposition of important plot points with sex acts in the background), the humiliation of women, scripting woman characters to thank their years of rape and abuse for making them “strong,” and gratuitous rape of and violence against women. For this last, take your pick: Daenerys raped on her wedding night, sex worker Ros tortured to death by baby tyrant Joffrey, Cersei raped by her brother over their son’s corpse, Sansa raped and tortured by husband Roose Bolton, a pregnant women stabbed repeatedly in the womb—few of these were in the books, btw. It’s also long had issues with women in positions of power, needing to delegitimize their authority by implying narcissistic or hereditary madness (women just can’t handle power, you see) as evidenced by Cersei’s fiddling while the Sept burned or Dany’s going dragon-nuclear on the King’s Landing (don’t feel bad for them, the “smallfolk” cheered when Ned Stark died). But Sunday’s episode, the series finale, was deeply troubling for me, and not just because like many fans, I thought season 8 went off the rails.

As a Romanist who works on women, gender, and sexuality,[1] I’m always looking for historical evidence of women’s lives and lived realities. Domestic violence in the records of Roman antiquity is hard to find.  Only about 5% of literature from ancient Greece and Rome is extant today, and that 5% represents what later peoples felt like preserving. Compounding the issue are the circumstances of literary production in the ancient Roman world: most literature was written by wealthy, elite men who had the leisure and resources to write and publish their work.  And on the whole, those men aren’t particularly interested in disseminating cases of violence against women unless that violence somehow benefited the state.[2] Nonetheless, we have a few incidents recorded, such as this one from Valerius Maximus (6.3.9):

Egnatius Metellus [7th century BCE]... took a cudgel and beat his wife to death because she had drunk some wine. Not only did no one charge him with a crime, but no one even blamed him. Everyone considered this an excellent example of one who had justly paid the penalty for violating the laws of sobriety.[3]

The early laws of Rome made women subject to the power of their husbands and gave husbands the power to execute their wives under socially condoned circumstances.[4]  A husband during this period could put his wife to death for drinking wine or committing adultery. Uxoricide could not be committed with impunity, but as long as one’s elite peer group approved (as Egnatius Metellus’ did), the slaying of a women in an act of domestic violence was excusable: a wife’s offense just had to be acknowledged publicly and her punishment subject to the approval of society.

Propertius, Tibullus, and Ovid, Latin poets during the age of Augustus (31 BCE – 14 CE), all wrote about passionate love affairs in erudite poetry that proclaimed their enslavement to their respective beloveds, but when these women denied the poets the entrance to their houses, their affection, or the sex requested, men’s tempers flared: romantic enslavement and gendered power role reversal reverted back to patriarchal socio-cultural norms. Tibullus describes an inclination towards violence (1.6), the Propertian speaker considers murder-suicide (2.8.25-28) and threatens to rip his girl’s gown and bruise her arms if she tries to cover up when he wants sex (2.15.17-20), and Ovid devotes an entire poem in his Amores (1.7) to recalling a time when the speaker’s anger prompted him to beat his girl.[5]  After his rage passes, the lover doesn’t apologize, but instead commands his girl to rearrange her hair so as not to remind him of his violence.[6]

Finally, we have Herodes Atticus, who allegedly kicked his pregnant wife Regilla to death. She grew up in Rome, protected by her wealthy Roman family, but when she married Herodes, a man of violent temper and beneath her socially, in 139 CE at just 14 years old, she moved to Greece with him. Isolated from her family and friends, far away from home, Regilla died under suspicious circumstances, and news of her death was slow to reach Rome. Her brother accused Herodes of murder, and his freedman was put on trial. Sarah Pomeroy, who wrote a murder mystery about it, believes Herodes was guilty and that he got off without punishment because of his relationship with Marcus Aurelius.[7]

In these examples, we see the now-conventional signs of abuse: isolation, controlling behavior, jealousy, “playful” use of force in sex, Dr. Jekyll/Mr. Hyde behavior, and the use of violence, including fatal violence. Of women killed by men in the US in 2016, 93% were slain by men they knew. Nearly half of all women murdered in the last decade were killed by an intimate partner. There are an estimated 30,000 to 50,000 deaths a year of women worldwide by intimate partners and family members. Domestic violence is an epidemic, and unlike the Romans, we have no shortage of recorded incidents and episodes.  Violence against women is a pernicious, pervasive social problem from antiquity to today.

So what does all this have to do with Game of Thrones? Representation matters, and GoT has given us another classic case of onscreen domestic violence. Caveat lector, spoilers abound.

Regardless of how you felt about the rushed story arcs in season 8, whether Daenerys Targaryen’s descent into megalomania and madness was foreshadowed or not, developed in her character in the show or not, evident in the books or not, her death was troubling. A man who claimed to love her, Hand of the Queen Tyrion Lannister, betrayed Daenerys and plotted her death, and Jon Snow, her lover (and family member—nephew), ultimately carried it out: he used their relationship (which has displayed a pattern of acceptance and rejection) to get her alone, held her in his arms, told her she would always be his queen, kissed her, and plunged a dagger into her chest, tenderly cradling her as she died.  He argued that it was for the good of the realm, that she had to be stopped before she took her armies on the rampage, that she had committed an unforgivable crime in burning the innocent civilians of King’s Landing. All very high-minded it seemed to the men, I’m sure. A council convened—mostly men—to determine if the murder was justified. It was, they said. The Queenslayer would renounce all claim to marriage, children, and lands, and return to the North, where he would rejoin all his friends and finally pet his dog. Danaerys would be relegated to the history books, patriarchy was restored to the land, and the death of a woman was approved in the eyes of all: just punishment for her offense.

There will be plenty of arguments that Dany’s death was justified, her character was irredeemable after the massacre of the surrendering and conquered city, that she was an unyielding zealot, that she has always been a tyrant. But the show’s writers have always presented Dany as an innocent girl with a dream, a visionary leader, a freer of the enslaved, and a mother. She was a woman. And she was a woman who was murdered by a man she loved, trusted, and relied upon.  A woman who was diverted from her path in the South, convinced by Snow’s entreaties to take her troops, her people, and her “children” to his home in the North to aid him in his struggle rather than her own.  Isolated from her power base (her cities in the East and her castle in the South), she was systematically broken down by the consequences of this choice: she lost a child, most of her army, her most steadfast ally, and the allegiance of her closest advisors. When she limps back South with what is left of her troops, she loses another child, her best friend, and more of her army. Her lover rejects her. She is betrayed by her closest advisor. And then her lover murders her.

Sound familiar? Strip back the thrones, the dragons, the armies, and you have a woman manipulated by affection and withholding, isolated and alienated by a man, murdered by an intimate partner who gets away with it in an act approved of by the many: “Not only did no one charge him with a crime, but no one even blamed him. Everyone considered this an excellent example of one who had justly paid the penalty.”

[1] Witzke, S. S. (2016). “Violence Against Women in Ancient Rome: Ideology versus Reality.” In G. G. Fagan & W. Riess (eds.), The Topography of Violence in the Greco-Roman World (pp. 248-274). Ann Arbor: University of Michigan Press. For more Classics and Game of Thrones content, check out Haimson Lushkov, Ayelet (2017). You Win or You Die: The Ancient World of Game of Thrones. New York: I.B. Tauris.

[7] (2007). The Murder of Regilla: A Case of Domestic Violence in Antiquity. Cambridge, MA: Harvard University Press.

Header Image: "The Rape of the Sabine Women" (1583), Giambologna, Loggia dei Lanzi, Florence, Italy (Image by Bradley Weber under a CC-BY 2.0 via Flickr).

05/23/2022
Blog: Contingent Faculty Series: An Interview with Victoria Austen
Our seventh interview in the Contingent Faculty Series is a virtual conversation between Dr. Taylor Coughlan and...
04/13/2022
Blog: Two Years Later: “Classics” after Coronavirus?
In an April 2020 post for Eidolon, I gathered predictions on “classics after coronavirus.” Two years later, it’s...
04/08/2022
Blog: Ancient Worlds, Modern Communities: Increasing Accessibility for the Study of the Ancient World
The Ancient Worlds, Modern Communities initiative (AnWoMoCo), launched by the SCS in 2019 as the Classics...
03/21/2022
Blog: I Love You, I Hate You: A Student’s Perspective on Learning Latin
I have always enjoyed Latin class because it felt like a puzzle, much like math. Find the verb, find the noun that...
03/18/2022
Blog: Power to Punish and Authority to Forgive: Imperial State and Imprisonment in 4th-Century Antioch
Research ideas often develop out of chance encounters or unplanned circumstances. My dissertation project was born...
END_OF_DOCUMENT_TOKEN_TO_BE_REPLACED