“What exactly is classics?” classics majors often find themselves being asked by curious friends or puzzled family members. This question is often followed by, “so what can you do with that?” Before we answer the second question, we need to address the first. Incidentally, these questions are relatively new. It was not so long ago that the study of classics was considered self-evident and foundational.

Classics is the study of the ancient world, specifically of the Greek and Roman cultures. Because Greeks planted colonies all around the Mediterranean coast and Romans built an empire that at its height extended from Britain to Iraq, the area that is being studied is vast. And the time period that classics covers is also considerable. Courses in classical archaeology often begin with the Paleolithic period and the earliest surviving stone tools; survey courses in Greco-Roman history often begin in the 3rd millennium BCE and end with the collapse of the western Roman empire in 476 CE. On the Greek side, undergraduate classics curricula often focus on Athens—since most of the surviving literary texts are Athenian—with the fifth and fourth centuries BCE receiving the most attention. On the Roman side, the city of Rome receives special attention, and the reign of Augustus (27 BCE – 14 CE) is the time period most studied. But classics instructors are increasingly expanding their courses to include topics such as late antiquity, non-elite populations and marginalized groups; examining the economic and cultural interactions between different communities within the Mediterranean and beyond; and drawing on non-literary texts such as the rich trove of papyri from Egypt to gain access to the lived experiences of everyday people. Moreover, developments in computer modelling and computer imaging have added a new and important tool to the study of the ancient world. 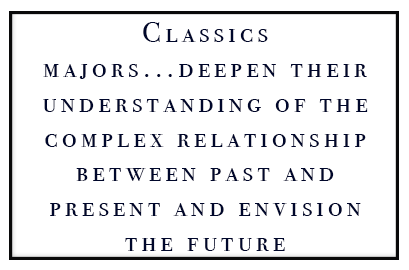 Unlike most other fields of study, classics is not a single academic subject, as are mathematics, history, or psychology. Rather, it is the study of Greek and Roman cultures in all their facets, as well as the cultures with which they interacted in the broader Mediterranean context. Classics usually involves language study: most classics majors study ancient Greek, Latin, or both languages. This allows them direct access to primary sources, be they literary works, inscriptions, or ancient graffiti. Classics majors also study archaeology, art history, literature, philosophy, religion, science, and other dimensions of the ancient world. The field is, therefore, by nature interdisciplinary. Those who choose classics learn to place individual ancient texts and artifacts in their broader cultural context. They also develop intercultural literacy by engaging with cultures and value systems different from their own, hone communication skills, both written and spoken, and deepen their understanding of the complex relationship between past and present and envision the future. For those with broad interests, classics is an especially satisfying major, as students don’t have to choose between their love of art, literature, history, languages, theater, etc., but can explore all of these in their ancient contexts. Classics also appeals to those with specialized interests, whether these be the study of ancient economies, religious beliefs, medical writings, or shipwrecks. Breadth and depth are characteristics of the field, as anyone who has attended a classics conference will soon discover.

The study of classics develops a variety of skills and capabilities that are applicable, both directly and indirectly, to a wide range of professions. As the Princeton Review notes in its concluding assessment of the classics major, “Classics majors get on well in life because they develop intellectual rigor, communications skills, analytical skills, the ability to handle complex information, and, above all, a breadth of view which few other disciplines can provide.” Certainly, classicists are disproportionately represented in medicine and law. Again, the Princeton Review notes that “students who major or double-major in Classics have a better success rate getting into medical school than do students who concentrate solely in biology, microbiology, and other branches of science,” and that “Classics majors (and math majors) have the highest success rates of any majors in law school.”[1]

Indeed, classics majors pursue all sorts of careers, making it hard to answer the question “so what can you do with that?” in a sentence or two. We have included eight profiles of classics alums who have gone on into employment sectors that are of particular interest to classics graduates. Highlighted in these snapshots are ways in which a classics degree provides relevant skills and experiences across multiple fields. When we put out the call to classics faculty for alums to highlight, we received dozens of leads suggesting alums who had gone on to careers as varied as (in no particular order): theater director, airline executive, digital media specialist, chocolatier, research librarian, video game designer, publisher, nuclear reactor operator, accountant, live and studio sound engineer, arborist, and company founder and CEO. Although some of these positions require graduate degrees, all of these alums got their start in classics and continue to rely on the skills they developed during their undergraduate education.

The second iteration of the conference,

The Executive Committee of the SCS has issued the following statement: