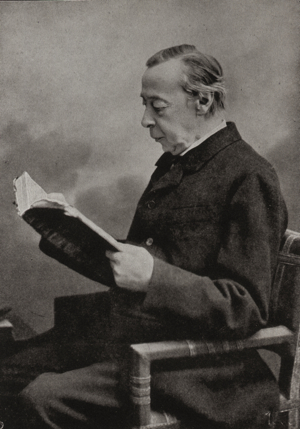 Every year since 1984, thanks to a series of generous grants from the National Endowment for the Humanities (NEH), the SCS has sent a post-doctoral Fellow to Munich to contribute to the world's most detailed lexicographical project on classical Latin, the Thesaurus Linguae Latinae. This project began in 1894, sponsored by the five German-speaking learned societies then in existence, under the direction of the distinguished philologist, Eduard von Wölfflin (right). It is now administered by an international body, the Internationale Thesaurus-Kommission, to which the SCS belongs; the SCS representative on the Kommission is Professor Kathleen M. Coleman. 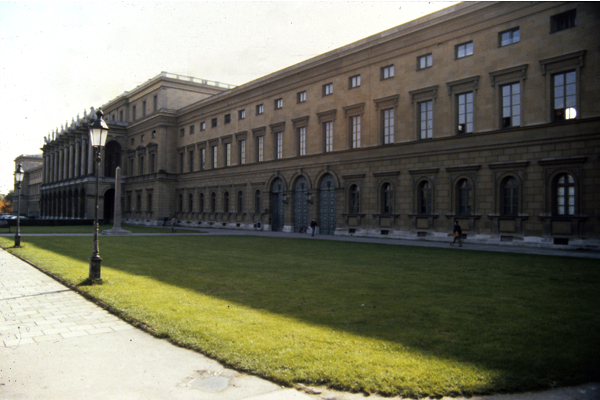 The project aims to compile a monolingual dictionary—composed in Latin—that is based upon every existing instance of every Latin word from the beginning until the second century CE, and a lexicographically significant sample of the material available from the next four centuries, i.e., until the end of the sixth century. It is based in Munich, in elegant accommodation within the Bavarian Academy (Bayerische Akademie der Wissenschaften), which is housed in the Residenz (left), formerly the palace of the Bavarian royal family.

The SCS/NEH Fellow is assigned to a Redaktor (Editor) who is responsible for guiding the Fellow in the research and composition of entries for the lexicon, starting with a small word with (usually) fewer than a hundred attestations and a relatively straightforward semantic profile. As the Fellow gains experience, he or she is assigned words of greater complexity. As far as possible, the personal interests of the Fellow are taken into account in making the more advanced assignments. 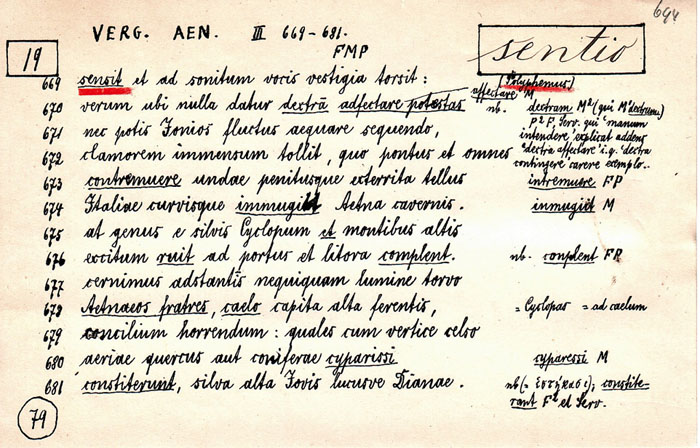 The attestations are compiled on slips of paper (Zettel, right) that are stored in boxes in the Thesaurus archives (Thesaurus-Archiv) adjacent to the library. The entries themselves constitute primary scholarly research pursued to a very exacting standard. The Fellow's Redaktor and other members of the team of approximately 20 Redaktoren (Editors), Mitarbeiter (Contributors) and Stipendiaten (Fellows) are always available to guide the new Fellow. The entries are referred to as "articles," and each appears under its author's name, just the same as an article in a journal.

To be eligible for the Fellowship, candidates must already have the PhD in hand when applying for the Fellowship, and be American citizens or permanent residents, as stated in the annual advertisement. An applicant's dissertation need not be on a strictly philological or lexicographical topic, nor even necessarily on Latin. Prospective applicants are sometimes nervous about their lack of fluency in spoken German; in fact, funds are available to help the successful candidate get some tuition prior to departure, and one of the benefits of the Fellowship is the chance to acquire fluency once the Fellow gets to Munich, although this, of course, requires total immersion in the language. Everyone at the TLL can speak English, but the less a Fellow falls back on it, the more fluent his or her German will become.

Munich is an expensive city, and affordable accommodation is scarce, but the TLL administration, under the direction of the very friendly and helpful Secretary, Herr Flieger, assists the new Fellow with this and other practical issues. The city’s location at the foot of the Alps, surrounded by lakes, is exquisite, and public transport within the city and its immediate environs is excellent. For trips further afield, German Rail (Deutsche Bahn) goes everywhere and often. Cultural life is rich, and in addition to the library at the Thesaurus, the Bavarian State Library (Bayerische Staatsbibliothek) and the library of the Ludwig-Maximilians-Universität are less than a kilometer down the road.

Technological innovation in the twenty-first century is obviously having an impact on the dissemination of the TLL; the published fascicles are now available by site-license on the internet. Digitization also has the potential to affect the composition of the articles, although that is only one of the factors in the evolution of the lexicon, whose history reflects a constant process of refinement in lexicographical theory and principles. These issues were the topic of a panel sponsored by the TLL Fellowship Committee at the APA meeting in Montreal in 2006 and subsequently published in TAPA.  The TLL Fellowship Committee also sponsored a panel on "Latin Lexicography: Theory, Practice, and Influence from Republican Rome to the Carolingian Court" at the 2012 meeting of the APA in Philadelphia.  International meetings devoted to specialized branches of lexicography are advertised in the Newsletter of the Dictionary Society of North America.

Members of the TLL Advisory Committee of the SCS are available to conduct a seminar on the Thesaurus Linguae Latinae to a group of graduate students or advanced undergraduates, or else they can suggest someone local who might be able to do so. These seminars are designed to help scholars and students to make full use of the lexicon, which upon first acquaintance may appear to be a somewhat daunting resource. Anyone requiring further information about such seminars, or about the Fellowship itself, is welcome to contact the Chair of the Committee, Professor Yelena Baraz.

END_OF_DOCUMENT_TOKEN_TO_BE_REPLACED
Calls for Papers
CFP: Annual Meeting for Postgraduates in the Reception of the Ancient World (AMPRAW