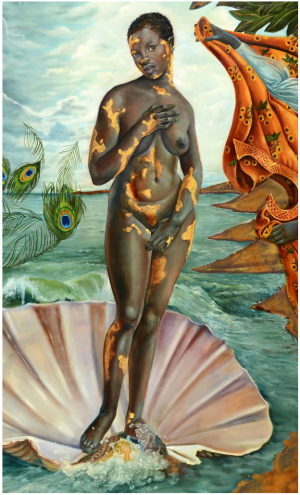 The Ancient Worlds, Modern Communities initiative (AnWoMoCo), launched by the SCS in 2019 as the Classics Everywhere initiative, supports projects that seek to engage broader publics — individuals, groups, and communities — in critical discussion of and creative expression related to the ancient Mediterranean, the global reception of Greek and Roman culture, and the history of teaching and scholarship in the field of classical studies. As part of this initiative, the SCS has funded 132 projects, ranging from school programming to reading groups, prison programs, public talks, digital projects, and collaborations with artists in theater, opera, music, dance, and the visual arts. To date, it has funded projects in 28 states and 11 countries, including Canada, the UK, Italy, Greece, Spain, Belgium, Ghana, Puerto Rico, Argentina, and India.

This post focuses on four AnWoMoCo-funded projects, all of which respond to Greek myth and tragedy through a contemporary lens: a workshop inspired by Euripides’ Trojan Women in Utica, NY; educational programming around a new short film on Euripides’ Medea at Skidmore and Union colleges; and two art exhibitions, one in Santa Barbara, CA on the Afro-Cuban LA-based artist Harmonia Rosales, and one in Ithaca, NY on the dialogue that can be generated between classical art and contemporary multi-media artists.

With funding from AnWoMoCo, Colgate University, and Hamilton College, Nancy Rabinowitz, Emerita Professor of Comparative Literature, arranged to bring Rhodessa Jones, Director of the Medea Project: Theater for Incarcerated Women, to Utica to work on Trojan Women with members of the Utica refugee community. Jones and her group are well known for their community work, both in prisons and with women living with HIV. Utica has been one of the sites for resettlement of many generations of refugees from Bosnia, Sudan, and, most recently, Thailand and Myanmar.

After encountering Jones’ work with students on college campuses, Rabinowitz invited both Jones and two formerly incarcerated members of the company to organize and run a workshop inspired by Euripides’ tragedy Trojan Women for young women refugees from the Midtown Utica Community Center. Her goal was twofold: to enable participants to think about how the current situation has affected them, and to make clear the relevance of Classics. As Rabinowitz explains, Jones attempts “to convey the translatability of tragedy to people who may never have read a Greek play” and “to demonstrate how we can use the play to stimulate critical thinking and to access buried trauma.” The workshop lasted for two hours on a Saturday afternoon and the participants, who had read the play ahead of time and discussed it with Rabinowitz in two classes, generated a movement piece based on the words and gestures that the name Helen evoked for them.

Here is what one young woman said after the workshop:

My day have been going “meh.” I lost all my motivation. But as I waited for Dah to come pick me up, I wanted to make sure I had my book, thinking it would just be a reading workshop. But once I step into the room, I knew that was going to change. My day went from a numb gray to a bright yellow. This yellow is energetic confidence. I feel motivated, something that was once lost. But now, starting today, I’m going to be me. I am going to own it. 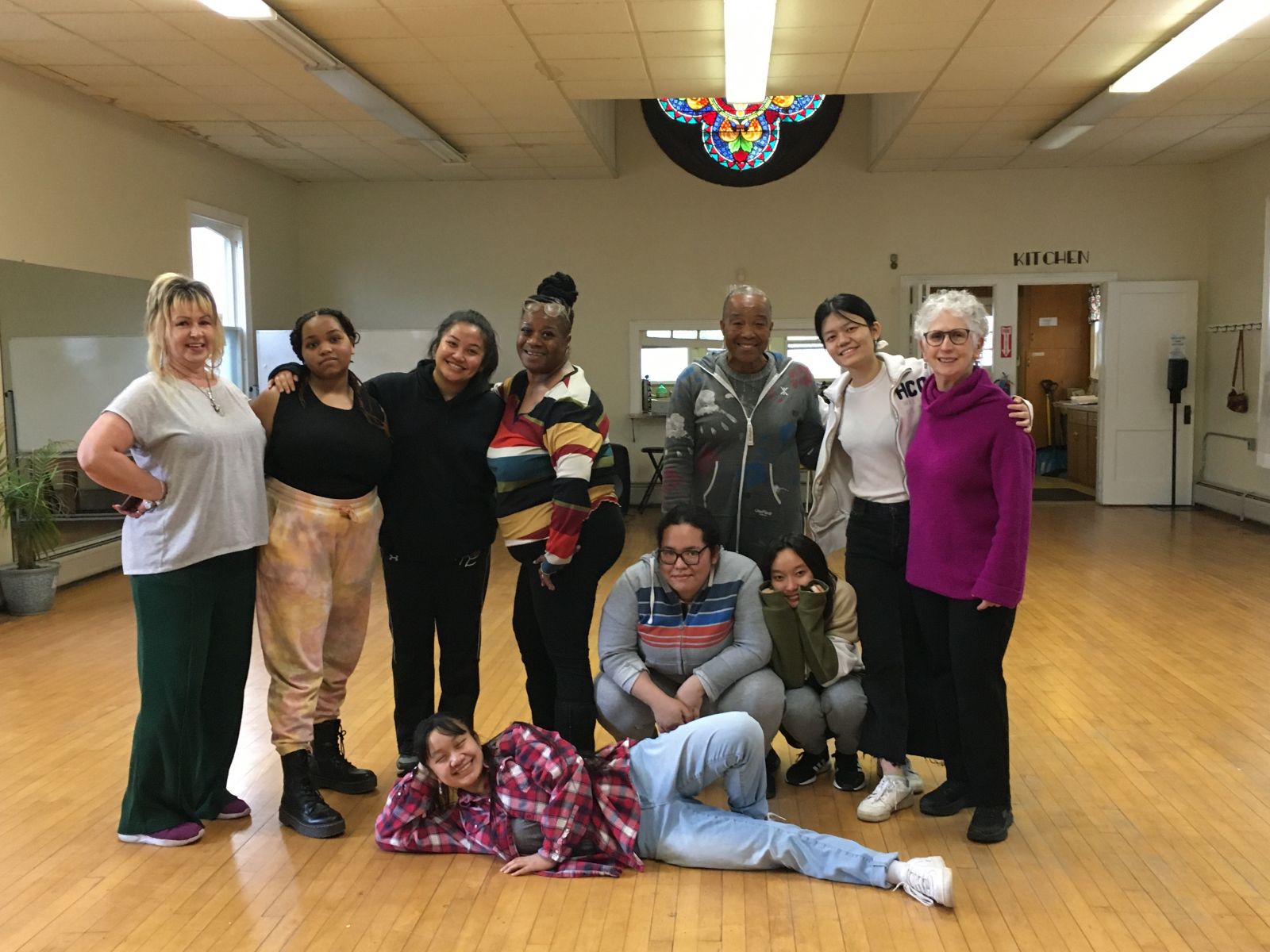 Figure 1. Rabinowitz, Jones and two members of her company with the workshops’ participants in Utica, NY.

Also in New York State, Skidmore and Union College worked together so that they could both host a campus visit in early March for Shivaike Shah, founder of Khameleon Productions and Visiting Artist at Brown Arts Institute at Brown University, and the company’s tour manager, Cara Vaitlingam. These campus visits, aimed to spur public interest, follow Khameleon’s production of a contemporary adaptation of Medea, originally adapted by Francesca Amewudah-Rivers when she and Shah were students at Oxford University, for which they also received AnWoMoCo funding. As part of their Uprooting Medea tour, Shah visited a number of North American colleges and universities in hopes of reaching not only students and scholars in the field of Classical Studies, but also in disciplines such as Theater, Media Studies, Women and Gender Studies, and Critical Black Studies. Khameleon’s campus visits seek to foster an inclusive vision of Classical Studies and to highlight the company’s commitment, as they put it, “to celebrate the creative power of diverse voices.”

Dan Curley, Associate Professor of Classics and Chair, and Stacie Raucci, Frank Bailey Professor of Classics and Chair, prepared their student communities for Khameleon’s visits by holding virtual talks and discussion groups around Medea. When on campus, Shah visited select classes and met with students in small groups before a public presentation about their Medea and discussion of their vision. Discussion included comparisons between Medea’s situation and the current refugee crisis. For Khameleon, Medea is a play is about race, belonging, identity, and the idea of home.

Curley and Raucci noted that Shah’s enthusiasm for his work and his persistence to work through the pandemic were all inspiring to the students. Curley shares his thoughts further:

In my tragedy class, students warmed up to Shivaike and his very direct style of engagement. Many of my students eventually responded to questions and made statements of their own, and it was a good opportunity for them not only to synthesize their previous thoughts about Medea but also to formulate new ones in the face of Khameleon’s work. Shivaike's public presentation is wonderful and provides a full and clear introduction to the original Oxford production and to the film itself.

Teisha Duncan, Artist-in-Residence in the Theater Department, whose class Shah also visited, found this a rare opportunity for her students to meet artists from the UK and hear about cultural differences in industry practices, while Classics senior A.M. Davis really appreciated “the awareness of diversity this production brings to the Classics.”

More information on their visit at Union can be found here, and at Skidmore here.

AnWoMoCo also supported the installation of the new art exhibition Harmonia Rosales: Entwined, featuring largely new paintings by Afro-Cuban American artist Harmonia Rosales at the Art, Design & Architecture Museum at the University of California, Santa Barbara. The exhibition was curated by Helen Morales, the Argyropoulos Professor of Hellenic Studies at UC Santa Barbara, with Sophia Quach McCabe, and with the assistance of Classics graduate student, Polyxeni Trikoulis. It presents Rosales’ dynamic re-imaginings of ancient Afro-Cuban stories and their resonances with ancient Greek myths.

As Morales explains in the brochure to the exhibition, Harmonia Rosales: Entwined  “celebrates the orishas (West African Yorùbá deities) and their extraordinary tales of desire and beauty, envy and betrayal, endurance and hope. The Afro-Cuban tales are here entwined with those from ancient Greek mythology whose gods, goddesses, and heroes are every bit as contradictory and capricious as the orishas can be. [The exhibition] also presents the evolution of Rosales’ art from paintings that explicitly engage with Greek mythology, to those whose associations are more subtle. Her art both embraces the Greek myths and supplants them, creating a sumptuous new Renaissance visuality that foregrounds the power and beauty of Black and Latinx figures."

Rosales’ work challenges traditional notions of classicism and Western ideals. By re-working iconic paintings like Botticelli’s The Birth of Venus, for example, with the Yorùbá deity Oshun, goddess of fertility and sensuality in the place of Venus, she invites the viewer to reconsider their definitions of beauty, power, and excellence.

The exhibition ran from January 8 to May 1, 2022, and plans are in progress for it to travel. For talks by the artist, Dan-el Padilla Peralta, and Elizabeth Peréz, see here: https://www.museum.ucsb.edu/news/feature/929 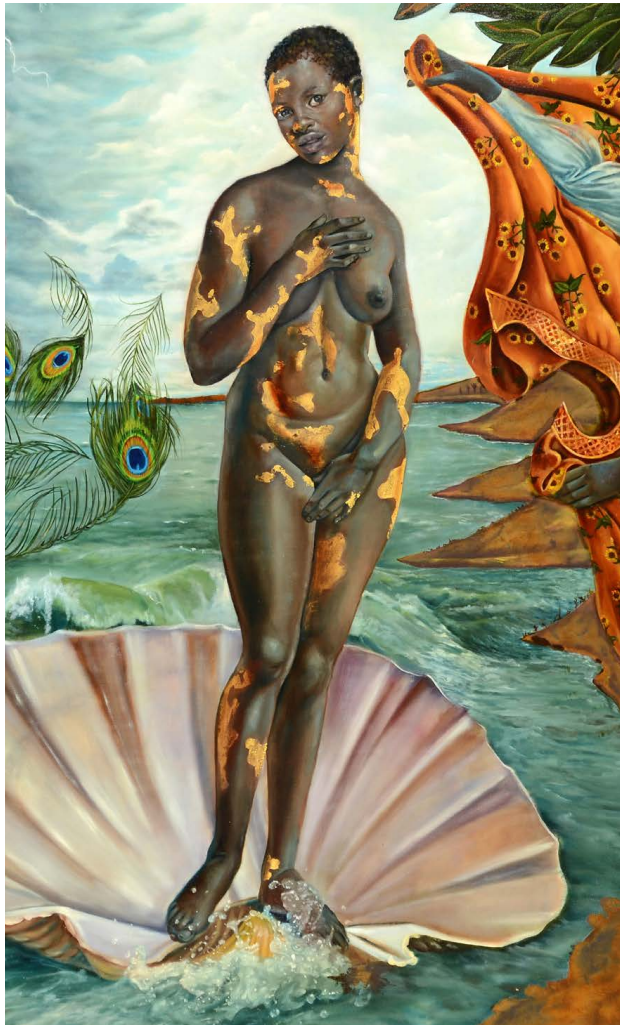 Another exhibition, The Sculpture Shoppe, displayed inside a former retail store in downtown Ithaca, NY from May 5–29, was also interested in challenging the viewers’ notions of western ideals and excellence. Curated by Verity Platt, Professor of Classics at Cornell University, and David Nasca, graduating with an M.F.A., The Sculpture Shoppe followed an approach similar to the Rosales exhibition. It placed the responses of a wide range of contemporary artists, including sculptors, scenic designers, and mixed-media artists, in conversation with Cornell University’s cast collection of Greco-Roman art.

“Personal Odyssey”, for example, a piece by Danny Smith and Rebecca Levitan, features Cornell’s cast of a portrait of Homer atop an "Odyssey Generator.” When activated by a push button, the generator prints out receipts, giving directions from classically named locations across upstate NY, such as Troy, Attica, and Rome, back to the Shops at Ithaca Mall. As Platt explains:

the piece draws attention to the systematic renaming of Iroquois lands in Western New York with toponyms drawn from classical antiquity. Like the plaster casts at Cornell, these forms of classical imitation asserted western ideals on stolen territory. In the context of the dying shopping mall, they are now put into dialogue with another cycle of ruination — the lost utopia of American consumerism. 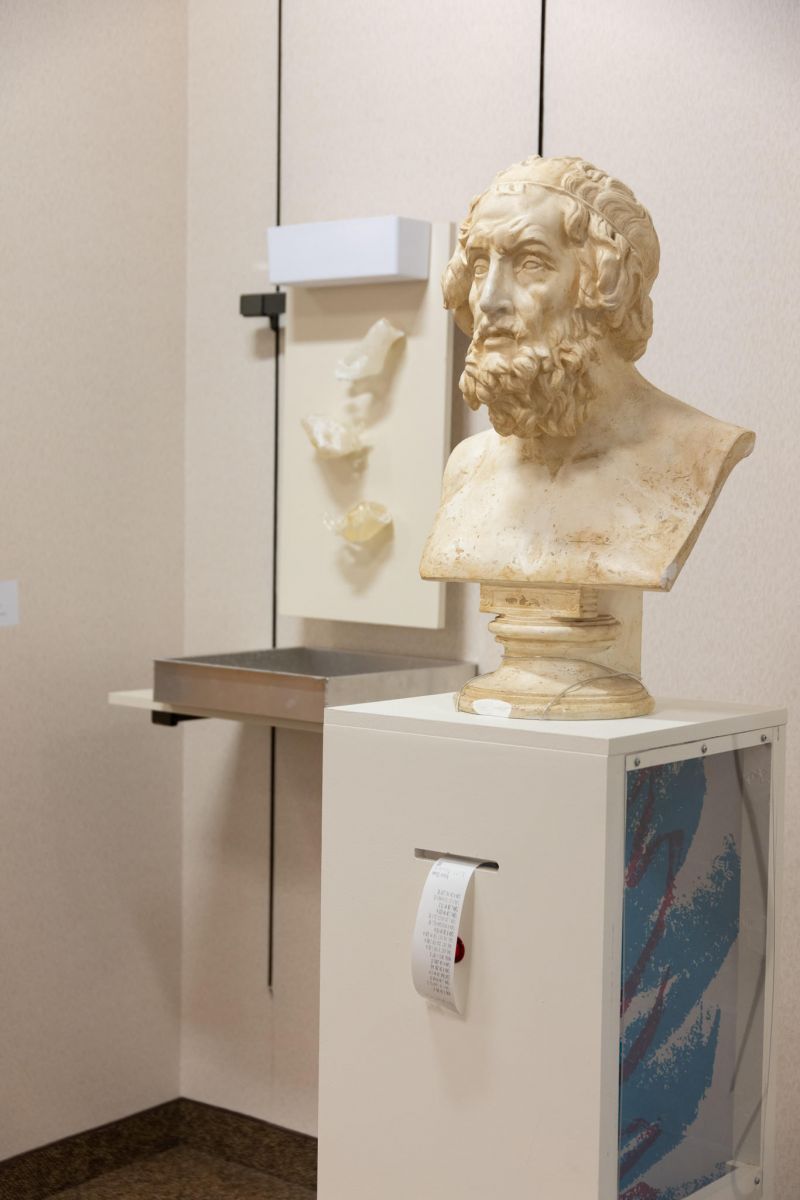 Figure 3. Installation view of The Sculpture Shoppe featuring the Odyssey Generator, by Danny Smith and Rebecca Levita. The Shops at Ithaca Mall, May 2022. Photo: Chris Kitchen.

There were live music performances for both the exhibition’s opening and closing. For the closing, Buffalo-based musician Medusa performed music from The Allegory of the G/rave, her new album exploring the myth of the Gorgon through the lens of “revenge pop.” Having drawn a wide audience from across Ithaca and upstate New York, the exhibition made a significant impact on the area. Platt explains further:

Many visitors were keen to relate the artwork to their own experiences, whether of art-making, life modeling, 3D printing, or mushroom-growing! And many had fascinating questions about the significance of antiquity today. We were especially grateful for the opportunity that the show gave us to open dialogues with contributing artists from across the U.S.A., Mexico, and Canada, who explored the exhibition’s theme through a kaleidoscope of different questions, identities, and material practices. Some of these dialogues are already developing into longer-term projects relating to Cornell’s cast collection and local histories of classicism in upstate NY. 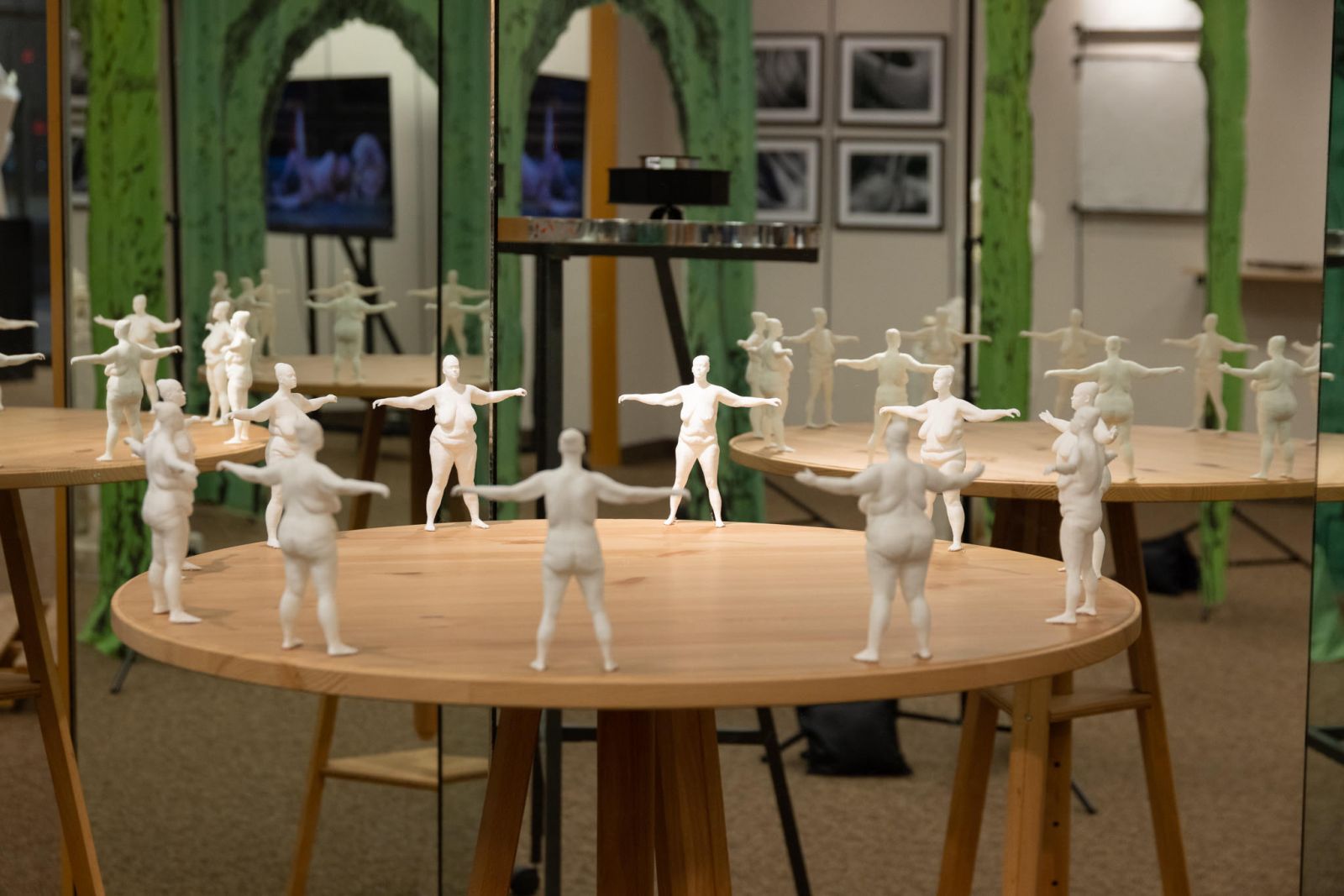 Figure 4. Installation view of The Sculpture Shoppe featuring Studies for “Fluctuate” by Laurie Berenhaus. The Shops at Ithaca Mall, May 2022. Photo: Chris Kitchen.