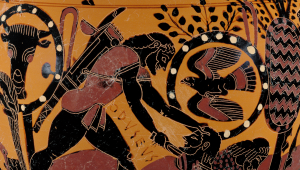 The new Classics Everywhere initiative, recently launched by the SCS, supports projects that seek to introduce and engage communities all over the US with the worlds of Greek and Roman antiquity in new and meaningful ways. During the first round of applications, the SCS funded 13 projects, ranging from performances and a cinema series to educational programs and inter-institutional collaborations. In celebration of Black History Month, we’d like to highlight four of the projects funded in this round which aim to shed light on African-Americans’ interaction with the Greek and Roman worlds.

A pivotal part of cultivating an attachment to classical texts is reading and talking about how they relate to our everyday lives. Angel Parham, a Sociology professor at Loyola University specializing in issues of race, founded and directs the Nyansa Classical Community, an after-school and Saturday program aimed primarily to African-American students of low-income and disadvantaged families in New Orleans. SCS funding helps to support instructors’ compensation, educational materials, and the students’ transportation to and from the center. According to Parham, a program that introduces students to the liberal arts and cultivates their imagination from an early age is especially needed in New Orleans, a city where adult reading proficiency is far below the national average. The program’s core is reading Classical mythology, Greek and Roman texts, and Biblical stories, and it is Parham’s hope that Nyansa’s focus on language and literature “could help interrupt the cycle of limited literacy that perpetuates both poverty and racial inequality.” This year Parham has also partnered with Tulane University, whose Classics students are using Paideia’s Aequora program to teach Latin to the Nyansa community on Saturdays.

Nyansa means ‘wisdom’ in Akan, a language spoken in West Africa, predominantly in the area in and around Ghana. Parham was inspired to create this program 4 years ago, when she was homeschooling her children and turned to the Odyssey and other classical texts for her own children’s education. She found ancient Greek myths particularly appealing to young kids and important as a means to discuss big ideas with them. In an effort to serve underprivileged kids in her community who wouldn’t have the opportunity to engage with Greco-Roman antiquity and benefit from the creativity and imagination of ancient cultures, she created Nyansa. Last year Nyansa’s program was focused on the Odyssey and African-American receptions of this text. Students spent time looking at Romare Bearden’s “Black Odyssey” exhibition and made their own collages based on their experiences.

In a short video with Nyansa students, teachers encourage students to come up with similes to use in their poems.

This year the program is focusing on myths about the Greek gods. Josslyn Littles, a former student of Parham who is a senior at Loyola studying graphic design, is helping with this year’s curriculum. As part of her senior capstone project, she is creating her own black interpretations of the Greek gods and goddesses, which in turn are serving as inspiration for Nyansa students to write original poetry. A short video with Nyansa students shows teachers encouraging students to come up with similes to use in their poems—in this case, about Zeus. Parham’s own work on race informs her passion for Nyansa and allows her “to demonstrate the ways that African Americans have been actively in dialogue with these texts throughout their history.”

Another funded project highlighting the scholarly and artistic contributions of African-Americans to our field is a symposium that took place on February 16 in Washington, D.C. in honor of Anna Julia Cooper – an African-American Classics teacher and supporter of Classical education for African-American students in the early 20th century. The symposium took place at Hillsdale College’s Allan P. Kirby, Jr. Center for Constitutional Studies and Citizenship and was organized by David Withun, a former Classics high-school teacher and current instructor of English at Savannah Technical College. The symposium brought together Classics scholars and teachers, high school and college students, and people involved in education from D.C., Virginia, Maryland, New Jersey, North Carolina, Illinois, Michigan, Pennsylvania, and Georgia. Keynote speakers included: Shirley Moody-Turner, Associate Professor of English and African American Studies at Penn State University, and Carolivia Herron, a lecturer in Classics at Howard University who was inspired by Cooper’s writings and was taught by Frank M. Snowden, Jr., a classics professor at Howard University known for his work on blacks in classical antiquity.

Carolivia Herron and Shirley Moody-Turner at the symposium in honor of Anna Julia Cooper on February 16.

Last year, Withun helped organize a symposium at Savannah Classical Academy in Savannah, GA, in honor of William Sanders Scarborough, the first professional Classicist of African-American descent. The symposium was honored at CAMWS with the Committee for the Promotion of Latin (CPL) Award for Outstanding Promotional Activity in Schools. “Our hope”, Withun said, “is that, by holding a second symposium this time in the nation’s capital, we can continue to encourage the development of both academic relationships and community dialogue while also raising awareness among our country’s leaders of the need for outstanding educational opportunities for all students.”

Two more projects are working to bring Michele Ronnick’s "Black Classicists" exhibition at the Center for Hellenic Studies in Washington, D.C. to a wider K-12 audience. Caroline Stark, assistant professor of Classics at Howard University, has been awarded funds for K-12 programs and in-person visits to encourage students to follow the examples of artists and scholars of African descent who have used Classics in their scholarly and creative works. This initiative was conceived when Stark held a teacher workshop in October in collaboration with the Center for the Liberal Arts at the University of Virginia and the CHS on "Voices from the Margins: African American Contributions to the Humanities." There, many teachers expressed a desire to bring their students to the Black Classicists exhibition.

Through the Classics Everywhere Initiative, the SCS is also funding outreach through print media. There will be a printing of 600 copies of Michele Ronnick’s booklet about the first 12 African-American members of the SCS from 1875-1925, which will be distributed to K-12 teachers at the American Classical League’s 100th year celebration in June. With this booklet in hand as a teaching aid, instructors will hopefully be more eager to discuss the presence of Black Classicists in their classrooms. According to Ronnick, whose proposal received the funding, “every young student-especially those of African descent-will profit from knowing that our classical heritage includes black people.”

For those who happen to be in Winston-Salem, NC, the Classics Everywhere initiative is also funding the screening of Black Orpheus (Orfeu Negro, 1959) on February 28 at Aperture Cinema in Winston-Salem, NC. Lauren Rogers, Dean of Students at Salem Academy, has organized this screening along with a post-show discussion as part of a film series inspired by ancient myths. More information on this project will be forthcoming in a subsequent post, but we hope that underscoring the import of black history to and within the field of Classics will not end on February 28. As these projects demonstrate, Black History Month may inspire a special focus, but is in reality of year-round significance.

Proposals for the second and third round of Classics Everywhere funding are due March 1 and May 15 respectively and can be submitted here.

Header Image: Detail View of Odysseus slaying a Thracian Warrior. Chalkidian Black-Figure Neck Amphora / Storage Jar with Diomedes and Odysseus; Attributed to the Inscription Painter Rhegion, South Italy; about 540 BCE now at the Getty (Image via Wikimedia under a CC0).

08/02/2021
Blog: Ancient Worlds, Modern Communities: Inclusivity and Accessibility in the Study of the Literature and History of Ancient Greece and Rome
The Ancient Worlds, Modern Communities initiative (AnWoMoCo), launched by the SCS in 2019 as the Classics...
07/23/2021
Blog: “Can We Strangle the Muse?”: Carson and Bruno’s The Trojan Women
By Christopher Trinacty, Emma Glen, and Emily Hudson (Oberlin College) Anne Carson’s celebrated adaptations and...
07/12/2021
Blog: Contingent Faculty Series: A Conversation with Daniel Libatique
Our fifth interview in the Contingent Faculty Series is a virtual conversation between Dr. Taylor Coughlan and Dr...
07/06/2021
Blog: Six months in(surrection)
Today marks half a year since insurrectionists stormed the U.S. Capitol, occupied the Senate chamber, violently...
06/28/2021
Dissertation Spotlight: The “Oracular Tale” and the Oracles of the Greeks
Joseph Fontenrose’s The Delphic Oracle (1978) fundamentally reshaped how we think about Greek oracular divination...
END_OF_DOCUMENT_TOKEN_TO_BE_REPLACED