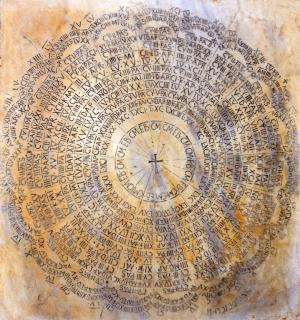 In the 6th century CE, a Scythian monk named Dionysius Exiguus was sent to Rome. Dionysius may have taken the monastic nickname of "the small" (exiguus), but his humility sheathed both his incredible abilities as a translator of Greek and Latin and his mathematical skills. He wrote and translated numerous saints lives, transcribed debates on heresies, and was known for his work with canon law. However, what Dionysius would be remembered for was his modifications to the dating system used within the Church and his attempts to use tables, called a computus, in order to track the date of Easter.

As classicists such as Michele Salzman have shown, calendars have long allowed for the organization and creation of cultural memories. They are also tools of transition. Whether we are discussing the institution of the Julian calendar or the early Christian one, the structuring of time was and is a potent tool that could be used to underscore and to erase various persons and events. Similarly, Dionysius wanted to overhaul the starting point for the current era by beginning it with Christ's birth, instead of conforming to the dating system instituted by the Church based on the era of the martyrs, which had counted forward from the 3rd century persecutor Diocletian (anno Diocletiani). Dionysius proposed: 'anno domini nostri Jesu Christi' (in the year of our Lord Jesus Christ'). This would mean that the date he was writing, Anno Diocletiani 248, would become Anno Domini 532 with his new calculations. The redefinition of 'A.D.' was thus born in the West, though many other churches (like the Coptic church in Egypt) would continue to use Diocletian's persecution as a marker of time and identity.

A second debate addressed by Dionysius had been raging since the second century: the date of Easter. As emeritus ancient historian Alden Mosshammer remarks in his book on Dionysius Exiguus, the term 'computus' was applied to the science of reckoning the date of Easter. It would later influence the creation of the word 'computer', but it originally had a much more ecclesiastical definition. According to the Gospels, Easter had occurred on or near the Jewish feast of Passover, held on the first full moon on the first spring month of the Hebrew calendar.

Early theologians such as Hippolytus of Rome spent dedicated amounts of time attempting to compute the date of Easter. At the time, early Christians often used the Jewish Calendar to help them to date and set their own celebration of Easter. This point is expounded upon by historian of Rabbinic Judaism Sacha Stern in his book, Calendar and Community. Yet in the third century, anti-Jewish sentiment caused some early Christian theologians to compute Easter as a means of divorcing themselves from a dependence on the Jewish calendar. Within Ps.-Cyprian's De Pascha Computus (On Computing the Paschal Feast) in 243 CE, he notes explicitly that Christians were sick of trailing after the "blind and stupid Jews" and thus wished to calculate Easter on their own. A late antique reminder that the creation of a calendar could express liberation, but also be born from prejudice.

A plaster cast of the Hippolytus statue, which has a paschal calendar in Greek from 222 on it (Photo by Sarah E. Bond at the Vatican Museums).

While the Bishop of Rome set the date for Easter in the West after consulting with various scholars, churches in Asia Minor refused to honor these dates. The Council of Nicaea in 325 would decree that both the Eastern and Western churches should hold Easter on the same day, but alas, both calculated the easter cycle differently though both did agree that the celebration should be separated from the Jewish calendar and fall on the Sunday after the first full moon that followed the vernal (spring) equinox (March 21). In 525, Dionysius stepped in and told a bit of a fib about the council proceedings and ultimately accepted calculations for Easter developed in the fourth century CE. He then set dates for Easter with his own computus spanning from 532 to 627, a 95 year cycle.

Although there were still adherents to the Ionan Easter calendar into the medieval period, in the West, the Synod of Whitby (664) would further engrain the western Church's date for Easter in Northumbria and elsewhere in modern Britain and Scotland. Even today, the Eastern Orthodox Church sets their own date for Easter. This year, it is on April 8. Bound up in this debate were not only aspects of mathematics, astronomy, and science, but also the basic notion that to control time was to assert dominance.

In concluding this blog post, I want to turn to my own obsession with calendrical control and some attitudes towards the calculation of time. As I have written about before on my blog and on Twitter, I prefer to use the notation of CE (Current Era) rather than AD as a more secular alternative--even if I do have a special place in my heart for Dionysius and for Late Antiquity. The use of CE is just one shift you may notice now that I am the editor-in-chief for the SCS blog, but there will be more. In my first post, I wanted both to introduce you, our readers, to my work as a historian of late antiquity, but also to note that there will be stylistic and content changes to the blog as the Communications Committee, SCS monthly bloggers, and other classicists contribute to the conversation in this space.

While I know that not everyone will agree on my editorial habits, I assure you that this remains an open but civil forum that welcomes people of all backgrounds and beliefs. In recent months, SCS's social media pages have occasionally been plagued with racist, xenophobic, and sexist remarks that reveal a rather toxic online environment that can lurk under the surface of the internet. But this is not something that has to be tolerated. Just as these remarks won't be allowed according to our social media policy, this blog will similarly remain a space that represents and emphasizes inclusion. That being said, we do want to hear what you have to say. So pitch us a story and make your voice heard within the SCS community. We may not always agree on polticial, religious, or social issues (or even the date of Easter) but I do think we can come together to underscore the import of Classics and community in the modern world.

Depiction of the 19 years of the Metonic cycle as a wheel, with the Julian date of the Easter New Moon, from a 9th-century computistic manuscript made in St. Emmeram's Abbey (Clm 14456, fol. 71r) (Image via Wikimedia and is in the Public Domain).

08/02/2021
Blog: Ancient Worlds, Modern Communities: Inclusivity and Accessibility in the Study of the Literature and History of Ancient Greece and Rome
The Ancient Worlds, Modern Communities initiative (AnWoMoCo), launched by the SCS in 2019 as the Classics...
07/23/2021
Blog: “Can We Strangle the Muse?”: Carson and Bruno’s The Trojan Women
By Christopher Trinacty, Emma Glen, and Emily Hudson (Oberlin College) Anne Carson’s celebrated adaptations and...
07/12/2021
Blog: Contingent Faculty Series: A Conversation with Daniel Libatique
Our fifth interview in the Contingent Faculty Series is a virtual conversation between Dr. Taylor Coughlan and Dr...
07/06/2021
Blog: Six months in(surrection)
Today marks half a year since insurrectionists stormed the U.S. Capitol, occupied the Senate chamber, violently...
06/28/2021
Dissertation Spotlight: The “Oracular Tale” and the Oracles of the Greeks
Joseph Fontenrose’s The Delphic Oracle (1978) fundamentally reshaped how we think about Greek oracular divination...
END_OF_DOCUMENT_TOKEN_TO_BE_REPLACED