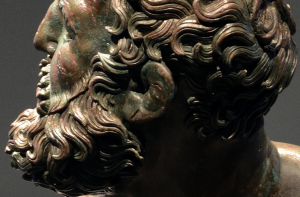 Today we feature a set of podcasts in which the host(s) present material about the ancient world directly to audiences, focusing variously on history, biography, culture, literature, archaeology, and reception. We’ve tried to select series that represent the enormous chronological, topical, and tonal variety that can be found in classics podcasts today (but there are so many available options that we simple couldn’t list everything here, so apologies to all the excellent podcasters we didn’t get to include!).

Chronologically arranged and covering Egypt from 3000 BCE to 1362 BCE that looks at history, law, economy, culture, monuments, and a variety of other topics. There are also mini-episodes that break free from the chronological narrative: Rahotep, Prince of Beer, and the business of brewing in the Old Kingdom; festivals and public entertainments; and Egyptian love poetry.

This podcast covers a huge swath of Greek history, society, philosophy, literature, and culture, with episodes that focus on particular people, times, practices, and ideas. Its companion website also contains masses of images that help to illustrate each episode’s discussions.

A podcast split into several series (#1, on human history until 500 BCE; #2, “Rediscovery”; #3, “Bloodline,” tracing the generations from Cleopatra to Zenobia; and coming soon, #4, “Thea,” on the Seleucid Empire).

The classics podcast that, to many, was the primus auctor of the genre and the first to gain widespread public attention. Now complete at 179 episodes, this series runs chronologically from Rome’s mythical origins through the exile of Romulus Augustulus (perhaps best known as the kid whom Colin Firth saves and who eventually fathers King Arthur in 2007’s The Last Legion).

Initially tracing the history of Rome from Caesar onward, this podcast now ranges more broadly with episodes devoted to figures such as Herodes Atticus (most famous today for sponsoring his Odeon in Athens) and Sallust, as well as topics such as slavery and old age.

A humorous run-down of all Rome’s emperors, from Augustus to Theodosius I, and then carrying on in the Western Empire through Romulus Augustulus and in the Eastern Empire all the way through Constantine XI and the Ottoman conquest of Constantinople (assuming the podcast keeps its momentum through another 700 years; the most recent episode covers Leo III).

Deep dives into various topics relating to the social and religious experience of antiquity, including separate series on: traditional worship in Asia Minor during the Roman Empire; voluntary associations of Jews, Christians, and immigrant ethnic minorities in Rome; and “a cultural history of Satan.”

A “light-hearted, only slightly blasphemous podcast,” this series runs through all the Catholic Popes from Peter onward, commenting on wider cultural and historical context (e.g., discussions of Pythagoreanism, the early Church’s architectural contributions to Rome, imperial edicts about religious sacrifice). The series follows the Annuario Pontificio but also promises bonus episodes on Antipopes, legendary Popes, and other such deviations from the official Vatican list.

A riotous and information-packed series that zooms in on historical events, places, and people (for example, six episodes are devoted to the career and nachleben of Coriolanus). There are also episodes dedicated to the reception of antiquity on film (Spartacus looms large here) and cultural topics (lots of rich explorations of sex, sexuality, gender, and women’s experiences in Rome), which are the hosts’ particular fields of special expertise.

Using a particular mythological figure or theme, or a specific piece of literature that is important for ancient myth, each episode unpacks the relevant primary sources to analyze their meanings and relevance. The podcast also considers the role of myth in the modern world and of ancient myth’s contemporary interpreters, so you’ll also find episodes devoted to topics such as DC Comics’ Wonder Woman and translations of ancient works by Ann Carson and Emily Wilson.

A topical potpourri that uses etymology to explore history and culture, often via unexpected paths (the most recent episode, for example, looks at the meanings behind the names of Santa’s reindeer, touching upon Martial, Catullus, Saturnalia, and different incarnations of Eros in Greek thought, as well as a number of non-Greco-Roman topics).

Launched with a Whiting Foundation Public Engagement Fellowship, this series explores the complicated landscape of the antiquities trade, with each episode using a physical object to set up discussions about larger issues: Cycladic figurines lead to how art collectors and museums fueled and continue to whitewash wholesale looting in the 1950s and 1960s; the Riace Bronzes and Fano Athlete lead to the gaping holes in international law; etc.

Long (1–2 hour) and detailed episodes on the literature of the Mediterranean basin, in which Metzger summarizes each work, quotes parts of it, and places it into its cultural and historical context. The series starts from cuneiform tablets and Gilgamesh and runs chronologically forward, with the most recent episode on Ovid’s Ars Amatoria.