Blog: Addressing Harassment in Academia at the SCS in Boston 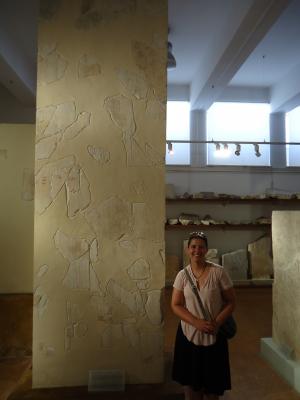 The following are the abbreviated introductory remarks to the “Harassment in Academia: Old Battles, New Frontiers” panel co-sponsored by the Women’s Classical Caucus (WCC) and the Committee for Gender and Sexuality in the Profession (COGSIP) at the annual meeting in Boston Jan 4-8, 2018. Notes from the panel and the coinciding workshop on sexual harassment can be found at https://medium.com/cloelia-wcc. Please note that the comments and ideas of SCS blog contributors are their own.

The idea for this panel first emerged last SCS as a result of series of events that included the online harassment of a colleague for her public scholarship and the silence of organizations within our field in her support. The rejection of a WCC sponsored roundtable on sexual harassment in academia by the SCS program committee (we resubmitted it this year as a workshop and it was accepted), and finally, the situation of a colleague who was facing retaliation when she reported sexual harassment by a Dean at her college and who has since resigned her position.

It seemed to us at the WCC steering committee meeting last January that the issue of harassment and discrimination (and the biases that underlie them) were alive and well in our field. and that our universities, professional organizations, and more privileged colleagues were unprepared or, in some cases, uninterested in doing anything about it. We decided that the WCC should try to fill the void and we began to embark on a campaign, now entering its second year, of engaging harassment in the field. We are calling it Resist Together and this panel is part of that campaign.

Who would have guessed how prescient this decision would turn out to be. In the time between the acceptance of this panel by the SCS program committee and now, there has been an explosion of discussion around the issue of harassment. Moreover, the #metoo in academia movement is only just begun.

Although we would like to think that a small field like Classics isn’t rife with harassment, it is. Sex discrimination and sexual harassment is still a serious problem in academia more broadly. The numbers of non-white members in our field is still statistically insignificant. Supports in our departments and at our conferences for colleagues with disabilities or impacts from chronic illnesses are negligible.

And, the issue of contingent labor and how non-permanent faculty (and junior faculty generally) are treated by departments and universities is not improving, though the issue is finally getting higher visibility.

The reality is that anyone who files a complaint about any harassment or bullying or complains about working conditions runs the risk of being labeled a ‘troublemaker’ and having their career negatively impacted before it even begins by the whispers of their more established colleagues to others.

In the area of sexual harassment, the recent forced retirement of William Harris has exposed something that the majority of women who study the Classical world know--that being a woman in graduate programs or early career stages often means enduring being a sexual target by your faculty. It means watching our mentors and classmates turn the other way so as not to suffer retaliation themselves for talking about it.

What happens on our campuses, though, does not begin to compare with what happens to our colleagues in archaeology when they are in the field--our students (especially graduate) and junior colleagues are subjected to an almost relentless barrage of bias, discrimination, and harassment in the field. Being a senior scholar doesn’t necessarily mitigate it. Digs often fall into institutional no-mans-lands and supporting universities or professional organizations aren’t yet stepping up to provide even a veneer of professional support. Serial harassers know they can get away with it since there is no one to watch over them, no one to report to, no penalties for derailing the careers of young women (or young men who don’t go along with it). A refusal of a sexual advance on a dig can mean no recommendations, no promotions, losses of opportunities, and you could end up being the subject of whisper campaigns that question your competence, that undermine your credibility, that punish the harassed as if they had done something wrong.

The internet has also opened up new frontiers both for scholarship and for harassment. We have many colleagues in the field doing great work in the public sphere to promote the study of the ancient world, to discuss how much antiquity has influenced modernity, and to provide access to ancient materials in new and exciting ways. But, the internet has made harassment much easier and our colleagues are being target for everything from comments on social media to public scholarship to published academic scholarship on topics the harassers find objectionable.

The backlash to talking about the harassment is already beginning--a recent survey in the Times Higher Ed included questions intended to show that women supporting women in the field was a form of sex discrimination against men. And anyone who has ever dealt with an HR department knows that protecting the institution is often not the same as supporting someone who has experienced harassment or bullying--silencing through preferring informal procedures or through making formal procedures onerous can deter or intimidate the reporting person.

This panel was not, however, about an airing of grievances. We know that harassment is endemic to academia and to our field. The stories so many of us could tell… (and are telling in the new Eidolon series “Philomela’s Tapestry”, in the Chronicle of Higher Education, and on professional blogs). What this panel aimed for, instead, is to jumpstart a conversation about solutions. There are conversations starting in many corners now in our field --we want to provide a platform to support those conversations already beginning or encourage those that need to happen.

Finally, I want to say thank you to the SCS, and especially Helen Cullyer, for supporting the WCCs initiatives. Thanks to COGSIP and the Professional Matters division for supporting this panel as well.

Rebecca Futo Kennedy is Associate Professor of Classics, Women's and Gender Studies, and Environmental Studies at Denison University and is Director of the Denison Museum. Her research interests include the intellectual, political, and social history of Classical Athens, Athenian tragedy, and identity formation (both gender/sexuality and race/ethnicity) and immigration in the ancient world. She is the author most recently of “Immigrant Women in Athens: Gender, Ethnicity, and Citizenship in the Classical City” (Routledge, 2014) and editor of the “Handbook to Identity and the Environment in the Classical and Medieval Worlds” (with M. Jones-Lewis; Routledge, 2015). She is a translator and editor (with S. Roy and M. Goldman) of “Race and Ethnicity in the Classical World: An Anthology of Primary Sources” (Hackett, 2013) and editor of the “The Companion to the Reception of Aeschylus” (Brill 2017). She is currently writing a book on race and ethnicity in antiquity and its entanglements in modern white supremacy and is co-translating a sourcebook of ancient texts on women in ancient Greece and Rome.

04/13/2022
Blog: Two Years Later: “Classics” after Coronavirus?
In an April 2020 post for Eidolon, I gathered predictions on “classics after coronavirus.” Two years later, it’s...
04/08/2022
Blog: Ancient Worlds, Modern Communities: Increasing Accessibility for the Study of the Ancient World
The Ancient Worlds, Modern Communities initiative (AnWoMoCo), launched by the SCS in 2019 as the Classics...
03/21/2022
Blog: I Love You, I Hate You: A Student’s Perspective on Learning Latin
I have always enjoyed Latin class because it felt like a puzzle, much like math. Find the verb, find the noun that...
03/18/2022
Blog: Power to Punish and Authority to Forgive: Imperial State and Imprisonment in 4th-Century Antioch
Research ideas often develop out of chance encounters or unplanned circumstances. My dissertation project was born...
03/14/2022
Blog: Sampling Epic in Kendrick Lamar’s “Mortal Man”
Because it’s spirits, we ain’t even really rappin’ We just letting our dead homies tell stories for us....
END_OF_DOCUMENT_TOKEN_TO_BE_REPLACED