Blog: A Roundup of Reports, Reactions, and Reflections After the SCS Annual Meeting 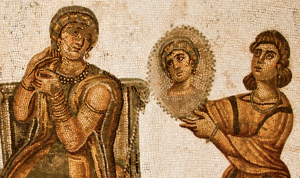 It has now been a month since the SCS-AIA annual meeting in San Diego, and many have written evocative, emotional, and important pieces about the racist events that occurred there. Instead of posting each separately on our social media or blog, I have tried to compile as many as I could in this post.

In their own words:

Emma Pettit, “‘My Merit and My Blackness Are Fused to Each Other,” The Chronicle of Higher Education (January 11, 2019).

Follow The Sportula on Twitter or Facebook, learn more about their mission to provide microgrants to classics students in need, and then promote or participate in their new conference: “Naked Soul: A Conference for All of Us.”

Other Reports and Reflections:

Board Statement, “Statement on Racist Acts and Speech at the 2019 SCS Annual Meeting,” Society for Classical Studies (January 6, 2019).

Other Academic and Professional Groups:

Classical Association of the Midwest and South (CAMWS) Statement (via email): “President Andrew Faulkner would like you to know that CAMWS has begun the process of writing a Code of Professional Conduct at CAMWS Meetings which we hope to have in place before our meeting in Lincoln.”

Many of you have reached out and asked about the "Future of Classics" video and we assure you that it will be posted on our YouTube channel as soon as we are able to process the videos given to us by the videographer that we hired to film all of the sesquicentennial panels. That should be soon, but we will post an update to this blog and notices on social media as soon as it is posted.

On a more personal level, I will say that while my own reactions and reflections are only ancillary to those made by Prof. Padilla Peralta and The Sportula, I too was incredibly upset by the racist events at the annual meeting. I believe we as a society must commit to sustained engagement in these issues in order to effect change. We must face this head-on and not describe these incidents as anomalous, anecdotal, or due to the mental health of one individual. As Prof. Padilla Peralta stated, “To ascribe racism to an individual pathology is to move the conversation away from where it needs to dwell: the collective pathology of a field that lacks the courage to acknowledge its historical and ongoing inability to value scholars from underrepresented groups.”

Header Image: Roman era mosaic of a woman looking into a mirror, Musée National de Carthage (Image by Fabien Dany via Wikimedia under a CC-BY-SA-2.5 License).

04/13/2022
Blog: Two Years Later: “Classics” after Coronavirus?
In an April 2020 post for Eidolon, I gathered predictions on “classics after coronavirus.” Two years later, it’s...
04/08/2022
Blog: Ancient Worlds, Modern Communities: Increasing Accessibility for the Study of the Ancient World
The Ancient Worlds, Modern Communities initiative (AnWoMoCo), launched by the SCS in 2019 as the Classics...
03/21/2022
Blog: I Love You, I Hate You: A Student’s Perspective on Learning Latin
I have always enjoyed Latin class because it felt like a puzzle, much like math. Find the verb, find the noun that...
03/18/2022
Blog: Power to Punish and Authority to Forgive: Imperial State and Imprisonment in 4th-Century Antioch
Research ideas often develop out of chance encounters or unplanned circumstances. My dissertation project was born...
03/14/2022
Blog: Sampling Epic in Kendrick Lamar’s “Mortal Man”
Because it’s spirits, we ain’t even really rappin’ We just letting our dead homies tell stories for us....
END_OF_DOCUMENT_TOKEN_TO_BE_REPLACED