Blog: A Spotlight on Classics Podcasting 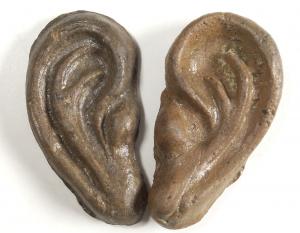 In Epistles 2.1, Horace argues that poets are useful to the city because they can teach the young how to speak, turn people’s ears from crude discourse, and mold the hearts of others with kindly teachings. And what fuels their work? Why, “they live on pods” (vivit siliquis, 2.1.123)!

Horace is thinking legumes, but the same could easily be said of a different kind of pod—the podcast, or siliquasparsio, si licet Latine—which in recent years has helped to cultivate new audiences for classical studies and to find new avenues through which to share knowledge about the classical world. There’s now a podcast for almost every taste: the general public eager to fill their commute and feed their fascination with antiquity; teachers looking for alternative ways to engage with their students; professional classicists seeking metascholarly insights; and so on.

If you’re interested in classics but new to podcasts, the current landscape can be a bit daunting. Where do you start? Podcasting’s inherently democratic form presents an outreach paradox: it can reach enormous audiences, but it’s also easy for a given podcast to be overlooked or hard for a prospective listener to find what they’re looking for in a series, since—as Hannah Čulík-Baird points out—there are now so many options and no centralized place to keep track of them all. 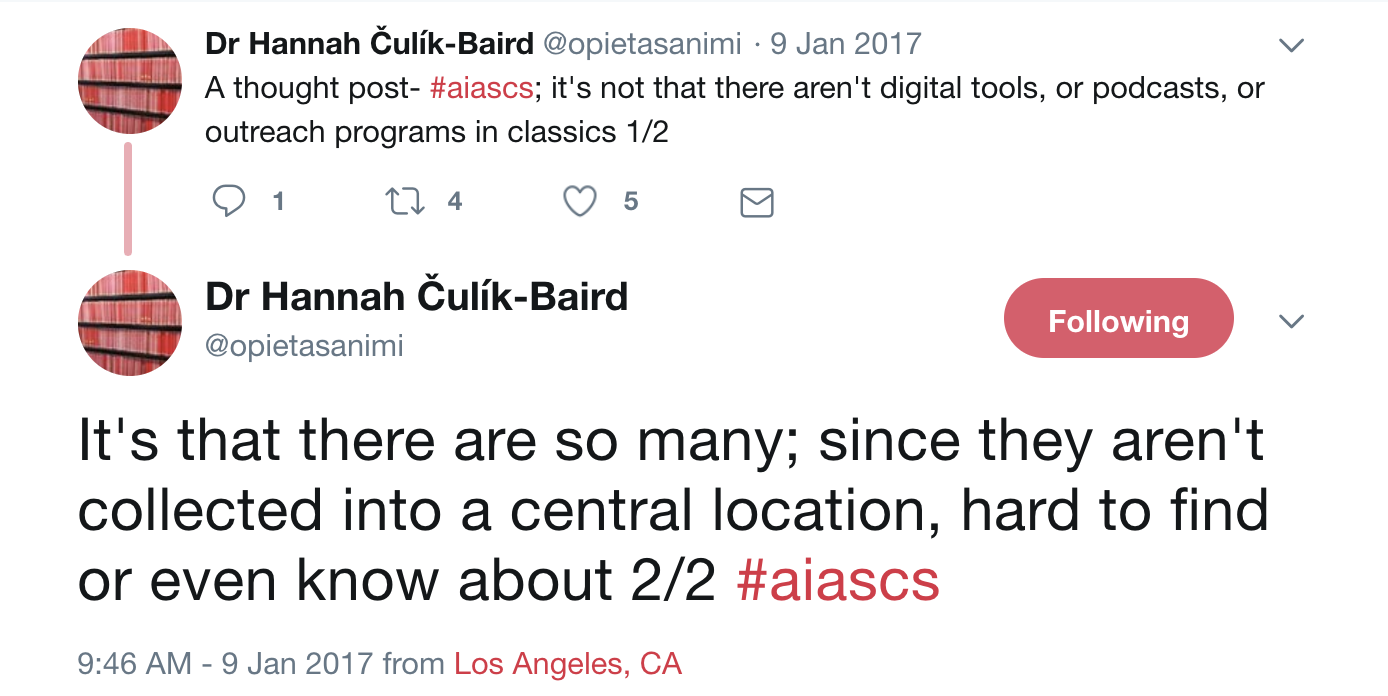 But documenting, organizing, and advertising podcasts come with their own problems. Alison Innes (who co-produces the mythTake podcast with Darrin Sunstrum) notes that such a list runs the risk of (de)authorizing and gate-keeping, and at any rate it’s a bit early to establish podcanon, especially while the field is actively probing the medium’s possibilities and still trying to figure out exactly how best to broaden its reach in the transition “From Gatekeeper to Gateway,” as the SCS has dubbed its most recent campaign.

Still, several such lists have been responsibly curated. David Meadows, a.k.a. rogueclassicist, has compiled a rich collection of classics-related podcasts that sorts each by general topic and points out which are ongoing, irregular, or complete, and Innes cites similar ones created by Chris Francese, Ryan Stitt, and others—all good places to explore the wide variety of content and approaches available. Readers might also want to keep an eye on this Twitter thread from Stitt’s podcast The History of Ancient Greece, where he features a different podcast series that deals with the ancient Mediterranean world a few times each week (starting with The History of Rome by Mike Duncan, arguably the pater podcastitatis who inspired Stitt and so many other classics podcasters working today): 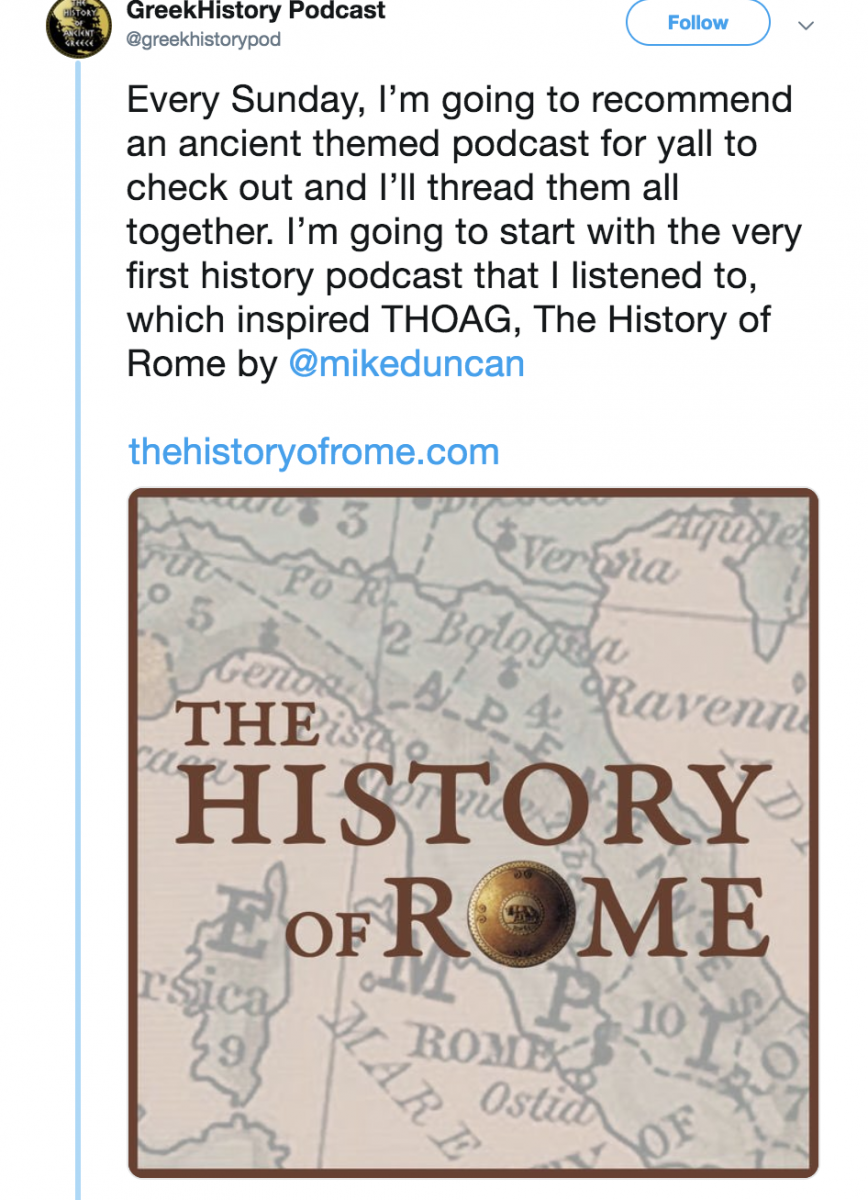 Every day this week, the SCS Blog will also offer a few lists of podcasts, including some from the above collections and several new series introduced since they were last updated. Rather than try to classify them by content, we’ve decided to present them according to format: narrative podcasts (i.e., those in which host(s) present pre-selected content), interview podcasts (i.e., those in which host(s) speak with various guests), and podcasts in Latin, for those interested in Comprehensible Input and Active Latin. These lists do not claim to be complete or authoritative, nor are they intended as endorsements; we merely want to showcase a selection of what is available as an helpful starting point, as well as to offer some fun options for folks who would like to stay connected to classical studies while traveling, taking an aural break from holiday conversations with relatives, or preparing for the SCS or the upcoming school term.

For those looking for further thoughtful guidance and reflection on the medium, the Podcasting the Classics panel at the upcoming SCS meeting presents an opportunity to hear from classicists with first-hand experience producing their own podcasts or incorporating them into their work as researchers and teachers. Organized by the SCS Communications and Outreach Division, Matthew McGowan, and Curtis Dozier, the panel features an introduction by Dozier (who hosts The Mirror of Antiquity) and five wide-ranging talks, including: “Educational Podcasts: Sensical Strategies” by Doug Metzger (host of Literature and History); “Outside the Gaze: Podcasting Ancient Rome as Woman Scholars” by Peta Greenfield (co-host, with Fiona Radford, of Partial Historians); “Classics for the People” by Vanya Visnjic (host of Ancient Greece Declassified); “Looted: Lessons Learned” by Zoë Kontes (host of Looted); and “Pod Save the Classics: Using Podcasts in the Secondary Classroom” by Andrew J. Carroll, who uses podcasts in his teaching.

If you find yourself inspired by the panel and want to make your own podcasts and/or want to show your students how to do so, check out Alison Innes’ SCS Blog post, “Finding Your Voice through Podcasting.” You might also take a look at the recent write-up by Joel Christensen/Erik Robinson, a.k.a. sententiaeantiquae, of Musings from GRK 365, a podcast series that Deborah Beck and her students at the University of Texas at Austin developed as an assignment for their course on Homer’s Iliad. This SCS meeting even offers a hands-on podcasting opportunity later the same day as the Podcasting the Classics panel in a presentation by Scott Lepisto (host of the Itinera podcast) titled “Make Your Own Ancient Studies Podcast” (1:00–1:40pm Saturday, Jan. 5, as part of the Ancient MakerSpaces: Digital Tools for Classical Scholarship panel). Lepisto promises to take participants “through every step of developing a podcast, from the idea phase through publication,” including conceptual, legal, and technical issues. Also, stay tuned this Friday for an SCS blog post by Curtis Dozier about his most recent episode of The Mirror of Antiquity, for which he interviewed a variety of people at last year’s SCS Meeting in Boston, from undergraduates to tenured professors, to get a sense of the vitality of the field and what interests and motivates those who attend the conference. In the meantime, auditores intendite: laetabimini!

Header Image: Clay backed Roman-Etruscan votive offerings in the shape of ears (Image via the Wellcome Library under a CC-BY-SA 4.0 International License).