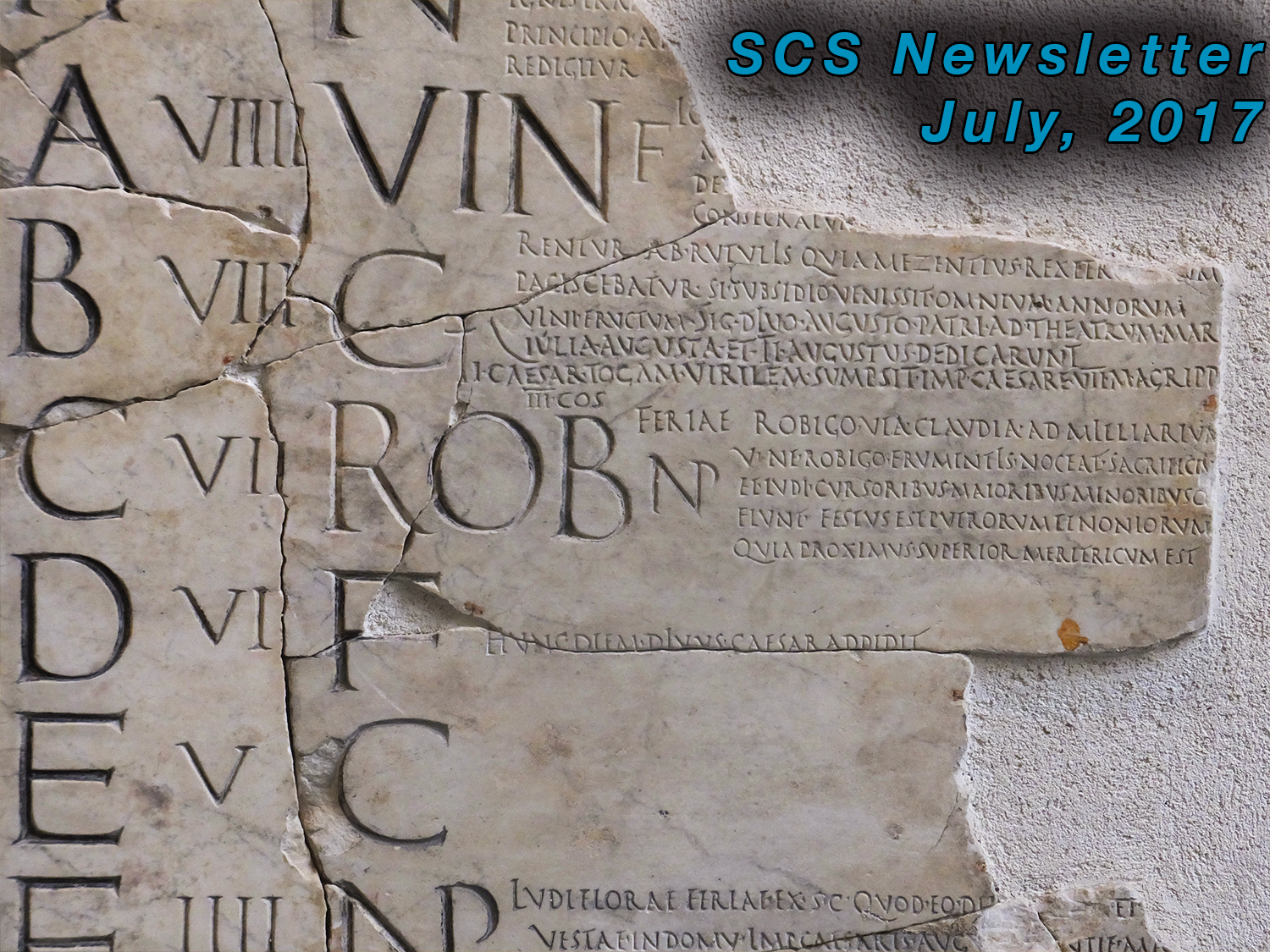 The academic year of 2016-2017 saw the 148th year of the Society for Classical Studies (SCS), formerly known as the American Philological Association. While the Placement Service is a considerably younger branch of the Society, the display of ads and collection of jobs data remains a top priority for the Society as a service to the field as a whole.

Below you will find a brief report on the state of the Placement Service for the 2016-2017 academic year. All data has been exported directly from the Placement Service portion of our website (classicalstudies.org), and most of it is self-reported by the candidates and hiring institutions that filled out their profiles, placed job ads, and requested interviews at the annual meeting. The data is incomplete in places, contradictory in others, but is, on the whole, the most comprehensive picture of jobs data for Classics in North America for this year.

Most of the data can be found and freely used for personal analysis in the Excel documents that accompany this report. Confidential information has been removed, and some data analysis that requires the use of confidential information has been presented in this report, but the raw data is not supplied to this report’s audience. This includes - but is not limited to - the maximum number of interviews by one person at the annual meeting (five interviews) or the average short list size for institutions (about twelve).

In sum, there were 146 job advertisements on the Placement Service this year. These were placed by 100 institutions, departments, organizations, and programs. The scope of job activities ranged from tenure-track, R1 faculty positions to one-year fellowships and journal editor positions and much more. This figure of 146 jobs is six ads more than the previous year (2015-2016). Do note that 146 is the number of advertisements placed on the Placement Service. Some ads – such as the one from the University of Southern California – were a singular advertisement for multiple positions. The number of jobs, then, will be higher than 146, but since number of positions advertised in each ad is not a field that we currently require of institutions, 146 reflects the most accurate data that we can provide.

Instead, when we look at the job type, we get a clearer picture of the nature of positions advertised. In all, 62% of the ads placed this year are considered contingent, meaning they are classified by the hiring institution as non-tenure track, adjunct, or part-time positions. 32% of the ads were tenured or tenure-track, and the remainder were classified as “open,” often meaning they were a non-teaching academic position such as a director or an editor. Our system does not currently distinguish between non-renewable non-tenure track positions and those that have the possibility of renewal or acceptance into a tenure-track position later on. In fact, some ads stated explicitly in their description that this was a possibility. Nonetheless, the fact remains that just shy of 2/3 of the academic market this year was for temporary, contingent faculty work. This ratio is consistent with the job numbers from the 2015-2016 academic year, which saw nearly the same breakdown in job type with the same ratio of contingent work to tenured/tenure-track jobs.

Specialty, or the preferred research or teaching area as indicated by the hiring institution, is difficult to quantify. Often institutions prefer to write their own descriptor for their ad, as each position and department is quite unique in its needs. All the same, some patterns can be discerned. For example, 29 (or 20%) of the job ads sought someone with a Latin language or Roman focus only, with 20 (or 14%) of the ads wanting a Greek or Hellenistic focus exclusively. By and large generalists or non-specific specialties made up 66% of the job ads placed this year.

Finally, when it comes to hiring, the data is still largely under construction. Out of the 146 ads placed this year, at the time of this report there are still 91 positions for which hiring information has not been provided to the SCS office. While some of these are Visiting Assistant Professor positions, usually placed in late Spring and, therefore, unfilled, a large number of ads whose deadlines have long passed are still indeterminate in terms of their final conclusion, or institutions have not reported the outcomes to SCS. We have provided what information there is (https://classicalstudies.org/placement/hiring-data-positions-classics), and will continue to update it as the information comes in.

One addendum: The unpublished data on interviews at the annual meeting, particularly in regards to short list size for each institution, is somewhat inconsistent from the data compiled in February. The average short list size remained around 12 (11.77, to be exact) with the largest shortlist being 25, but the smallest shortlist has dropped from 6 to 7 in the Placement Service data. This change reflects corrections to data in order to account for last minute changes in interviews directly before the meeting. Aside from that, the institutional data about interviews conducted at the annual meeting remains the same as the previously published report.

The SCS data on candidate demographics has shifted significantly since the mid-season data publication, and deserves some explanation. When the data was first compiled in February of 2017 there were 639 self-proclaimed job seekers in the Placement Service, and 338 of those had decided to fill out Candidate Profiles, which collect demographic information on candidates and are required in order for candidates to be scheduled for interviews at the annual meeting. As of June 26, 2017 (the most recent date on which data was collected) 764 people had signed up for the Placement Service listserv and 516 people had filled out their candidate profiles. Filling out profiles was not required after the Annual Meeting, and the reasons for the drastic increase in candidate profile completion are unclear. It could be that new members of the Service thought the profile to be mandatory. It could also be that, upon learning that these forms are used to compile data by the SCS office, more people filled them out even after the annual meeting had come to a close.

Nonetheless, this increase in the ratio of profiles to subscribers only aids in the accuracy of our demographic data. It’s worth noting that, out of the 764 subscribers, there are many who are in no way on the job market. They are simply interested in seeing what jobs come up, either because they’re about to enter the market or because they have a vested interest in how the market performs. Either way, the 516 profiles gives us a good, representative sample of who uses the Placement Service and why. Also worth noting is that last year (2015-2016) 546 candidates filled out profiles, and all comparative data that follows comes from those numbers.

In terms of employment, contingent faculty (full-time non-tenure track and part-time adjuncts) and the unemployed make up the majority of Placement Service users at 56% (55% in 2015-2016), followed by graduate students at 27% (28% last year). Research specialization was mostly in Greek Literature (23% or 147 candidates) and Latin Literature (23% or 143 candidates), followed by Art/Archaeology at 12%.

We will note once again that you can follow the link provided to see how these numbers compare to February (https://classicalstudies.org/sites/all/libraries/ckfinder/userfiles/file...(4).zip). Some things like the gender breakdown have not changed drastically with the increased participation, but other things like the percentage of contingent faculty on the market have increased drastically.

The Past, Present, and Future of Placement Service Data

We would like to take this final section to address some of the current and future concerns about gathering placement data. Apparent throughout this report is the overall lack of comparison to previous years’ data. In general, Placement Service reports and data collection have fluctuated based on the needs and interests of the committees in charge of data collection. Many data points have not made it into the yearly survey of candidates, and so longitudinal trends in things like contingent faculty positions are not as secure and well-understood as we would like.

Moving forward, the SCS will be, at a minimum, collecting the information that we collected this year in order to establish consistency across academic years. Over the next few years we will be implementing more sophisticated data analysis framework. With this information we hope to provide more accurate information to our members to better assess and react to the changing Classics and humanities jobs market.

For a word on the future of job placement at the SCS, check out Alex Sen's piece about the Career Planning and Development Committee.

To read about what changes were implemented to the Placement Service this summer, visit this page.