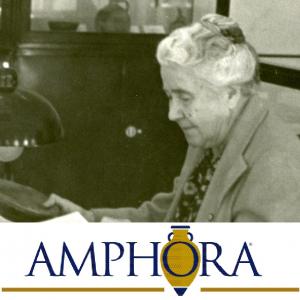 On February 14, the Ohio State University Press published The Drunken Duchess of Vassar: Grace Harriet Macurdy, Pioneering Feminist Scholar, by the late Barbara F. McManus—a volume richly meriting attention and accolades by the classics community, especially those specializing in Hellenistic and women’s history. McManus’ biography serves as a fitting sesquicentennial, 150th anniversary, tribute to Macurdy, Professor of Greek at Vassar College from 1893 through 1937, who was born on September 12, 1866, particularly in its contextualization of Macurdy’s Hellenistic Queens: A Study of Woman-Power in Macedonia, Seleucid Syria and Ptolemaic Egypt, published in 1932 by Johns Hopkins University Press, and her Vassal Queens and Some Contemporary Women in the Roman Empire, also published by Hopkins in 1937. Macurdy’s research on these intriguing figures in Hellenistic and Roman history represented the first effort by a classical scholar, female or male, to recover and document the lives of individual women whose names are part of the ancient Greco-Roman historical record. These two books also marked a dramatic change from Macurdy’s earlier scholarly endeavors. After receiving her PhD from Columbia in 1903, with a dissertation on the dating of Euripides’ plays, Macurdy published widely on Greek literature, and on prehistoric influences on Greek civilization and culture. But she did not venture into the field of ancient history, nor investigate women in the classical world, for decades after that.

McManus attributes Macurdy’s new research interests in the 1920’s to a combination of factors, beginning with Macurdy’s deep involvement in the women’s suffrage movement. Macurdy had marched and campaigned for this cause, particularly in the years before the 1917 bill that gave women the right to vote in New York State.

She maintains, too, that Macurdy’s years at Vassar had fueled her strong belief that education had the capacity to empower women, regarding her project on ancient Greco-Roman female rulers as an educational and motivational resource, especially for female students of classics and ancient history. In McManus’ own words, these books aimed to demonstrate “through reliable and unbiased research that some ancient women did play a significant role in government and politics despite the tremendous odds against them. By highlighting the achievements of some ancient women, Macurdy sought to encourage a sense of independent agency in young women faced with what seemed to be socially preordained limits.”

But Macurdy’s unhappy experiences serving on the male-dominated Managing Committee of the American School of Classical Studies at Athens from 1925-1929 were, according to McManus, a factor too. To be sure, Macurdy had embarked upon her study of ancient queens before two controversies arose on the Managing Committee: one resulting in the dismissal of Bert Hodge Hill, husband of Macurdy’s former student Ida Thallon, from his post as ASCSA director; the other an initiative to fund a hostel for women students at the ASCSA that went awry. Yet what Macurdy witnessed on this committee, McManus states, “strengthened her determination to give credit to the ancient women who had carved out some influence within a system that gave all collective and institutional power to males…[She recognized] that women could draw only on their own personal, individual power in such a situation, an insight as illuminating for the queens in Hellenistic times as it was for academic women in the early twentieth century.”

As yet another motivation, McManus adduces Macurdy’s growing compulsion to speak out publicly against injustice generally, and against biased and discriminatory assertions about women in particular, both in her own day and in Greco-Roman times. In this connection, she cites Macurdy’s response, in 1923, to an article in a British periodical by a woman, Charlotte Cowdroy, which had argued that women should give up paid employment when they marry. McManus views Macurdy’s words in reacting to Cowdroy as “foreshadowing an essential feature of the new approach Grace would pioneer in the study of ancient women.” For Macurdy wrote, “This is all very primitive, treating women as a species and not as individuals. It is very notable in the, as a whole anti-feminist, Greek literature that the expression ‘race’ or ‘tribe’ of women begins to be used very early. I have yet to see the same expression applied to men in that literature.”

McManus underscores, however, that Macurdy’s motivations were not all altruistic. Indeed, she claims that chief among them was Macurdy’s desire to win distinction as a classical scholar “who spoke with authority as a woman”. Macurdy had earlier adopted the British female classicist Jane Ellen Harrison as a role model, but came to realize that “Harrison’s field of study as well as her authorial voice did not conform to the established parameters of classical scholarship.” What is more, Harrison did not write about women. Yes, Harrison had “won a place on the periphery of the scholarly community but Grace was seeking a place at the center.” At Harvard’s Radcliffe Annex, where Macurdy had studied as an undergraduate and post-graduate, and in Berlin, where she had spent a year on a research fellowship, Macurdy “had been trained as a careful and exacting philologist, and she was determined to demonstrate that she could effectively use those skills without suppressing or downplaying her gender. She concluded that she could best accomplish this by turning to the study of ancient women.”

Barbara McManus singles out several distinctive aspects of Macurdy’s approach to her topic of Hellenistic and Roman female rulers, beginning with Macurdy’s determination to judge these historical women as individuals, in the specific context of their culture and time period, rather than as examples of a singular, unchanging species. As we have just observed, Macurdy regarded this mode of generalizing about the female sex as fundamentally unfair, faulting ancient authors themselves for representing women, but not men, as a separate “race” or “tribe”, in a generalizing, stereotyping way.  But Macurdy also insisted that ancient kings and queens be evaluated by the same norms, even though these royal women, unlike ancient male rulers, never attained the throne purely by birthright, and hence were at a disadvantage compared to their male counterparts in this important regard.

McManus hence stresses that, in Hellenistic Queens, Macurdy also “conclusively demonstrates that queens never achieved independent power equal to that of the kings in Macedonia and very rarely did so in Seleucid Syria. In Egypt, it was not until Cleopatra the Second, who lived from approximately 183 to 116 BCE, that Ptolemaic queens attained coregency with kings, and only Cleopatra the Seventh, with the help of Rome, achieved sole political power in her own right.” McManus continues, “at first glance, this may seem like a negative view of ‘woman power’, but in Grace’s hands it is actually strongly feminist. By showing that women, unlike men, never attained the throne purely by right of birth, she focuses attention on the individual qualities and strength of character that enabled some of these queens to wrest political influence and actual power from an overwhelmingly patriarchal dynastic system. Women, Grace contends, must be viewed as individuals, not as a ‘species’; hence her book relates the individual stories of each queen sequentially through each of the three [Hellenistic] dynasties.”  While this narrative structure “entails some repetition,” it avoids sweeping generalizations that erase important differences among these queens.

While McManus observes that Macurdy originally planned to rely heavily on her strong philological training in investigating the sources on ancient Greek and Roman female rulers, she reports that, “as she researched and wrote, Grace recognized the need to move beyond the confines of traditional text-based scholarship. It was clear that women’s lives could not be reconstructed from historical and literary texts alone, particularly since these were all written by males and skewed by various types of bias and stereotypical thinking. Grace had to supplement texts with material evidence, especially coins and inscriptions, but also sculpture, vases, and papyri. Her summer travels now included visits to museum collections in a number of European countries and consultations with numismatists and archaeologists.”

Such evidence looms particularly large in her book on vassal queens, whose goal differs from that on Hellenistic queens. In the later volume, McManus explains, “instead of trying to ‘vindicate’ women’s place in the ancient world, Grace is seeking…to recover the names and lives of the women in these client kingdoms, to view their agency, and to demonstrate once again the difference it makes to view history from the perspective of women.” As Macurdy herself acknowledges in the preface, “The names of most of the vassal-queens are familiar only to the numismatist, the epigraphist, and to those who have made a special study of the little principalities…” McManus singles out one ancient vassal queen whose importance was proven by Macurdy’s scrutiny of coins and inscriptions: Antonia Tryphaena, great-granddaughter of Mark Antony, who ruled in the kingdom of Pontus as regent for her young son Polemo after the murder of her husband King Cotys of Thrace, and mother of three vassal-kings and two vassal-queens.

McManus also remarks upon a distinctive feature of Macurdy’s style of writing:  “in general, Grace uses a traditionally objective scholarly tone based on voluminous research and citation, but she occasionally speaks in a more personal voice, as for example when discussing the dynastic murders perpetrated by Laodice, wife of the Seleucid king Antiochus II”. Here Macurdy asserts “Without wishing to condone the crimes of Laodice,” before stating “I find it a refreshing change from the sentiments of other historians” that one of their number compares her record of misdeeds favorably to that of Alexander. McManus discerns this personal voice, too, in Macurdy’s expression of contempt for “negative and positive feminine stereotypes that interfere with a judicious interpretation of the facts”; here she quotes Macurdy’s claim that John Mahaffy’s “views about the psychology of female love…must surely have been gathered from an extensive reading of melodrama rather than from an experience of the facts of life.” Nevertheless, McManus does recognize that “in keeping with her goal of presenting a more judicious and balanced account of the characters of individual Hellenistic queens and counteracting the condemnation of them as a group, Grace frequently employs a moralizing tone that was very common in her time but is not typical of modern scholarship.”

McManus accords special praise to Macurdy’s skill at analyzing the individual qualities and strengths of character that enabled some of the Hellenistic queens to wrest both influence and actual authority from an overwhelmingly patriarchal dynastic system. What is more, she argues that “although Grace’s primary aim in [Hellenistic Queens] is comprehensiveness rather than originality, [Macurdy] does not hesitate to present her own reasoning and conclusions on controversial details”: drawing upon “her philological expertise to verify her position” in contending that the Greek historian Diodorus Siculus is referring to Demetrius’ “children and his mother” rather than “his children and their mother”; collecting obstetrical statistics to establish that Cleopatra V Selene bore two sons in her forties. Finally, McManus responds to criticisms of Macurdy’s work with a deeply powerful insight:  “by studying Hellenistic monarchies from the perspective of the queens, the subjects of her investigation, by focusing on women as agents and men in relation to them, Macurdy turned historical scholarship on its head.” As we are in Macurdy’s debt for offering this new coign of vantage on Hellenistic history, so we are indebted to McManus’ magisterial biography for illuminating Macurdy’s vision.

Judith P. Hallett is a Professor of Classics and Distinguished Scholar-Teacher at the University of Maryland College Park. She specializes in Latin language and literature; women, sexuality and the family in ancient Greek and Roman society; and classical education and reception in the 19th and 20th century Anglophone world. Along with Chris Stray, Prof. Hallett brought The Drunken Duchess of Vassar to completion after the death of Prof. McManus in June 2015, providing an introduction and an epilogue.

The image that appears with this article is of Prof Macurdy at her desk (ca. 1940). It is reprinted with permission from the Archives & Special Collections Library at Vassar College.