The Odyssey for our Modern Times

The Odyssey for our Modern Times

How does performance help us to experience the Odyssey in new ways? On Friday, March 15, the SCS in collaboration with the Onassis Foundation USA and the Aquila Theatre attempted to answer this question with a staged reading of the Odyssey at the Fishman space of the Brooklyn Academy of Music. Emily Wilson, professor of Classics and chair of the Comparative Literature program at the University of Pennsylvania, used her translation to create a 75-minute script that focuses on Odysseus’ story as a veteran of war and his emotional journey home. From the first moment that we encounter Odysseus, we see a man suffering with trauma. He is crying, unable to let go of the past, but also unsure of how to proceed with the future. It is the emotional responses of the gods to his suffering – Athena, Zeus, and Calypso – that facilitate the last part of his journey home. 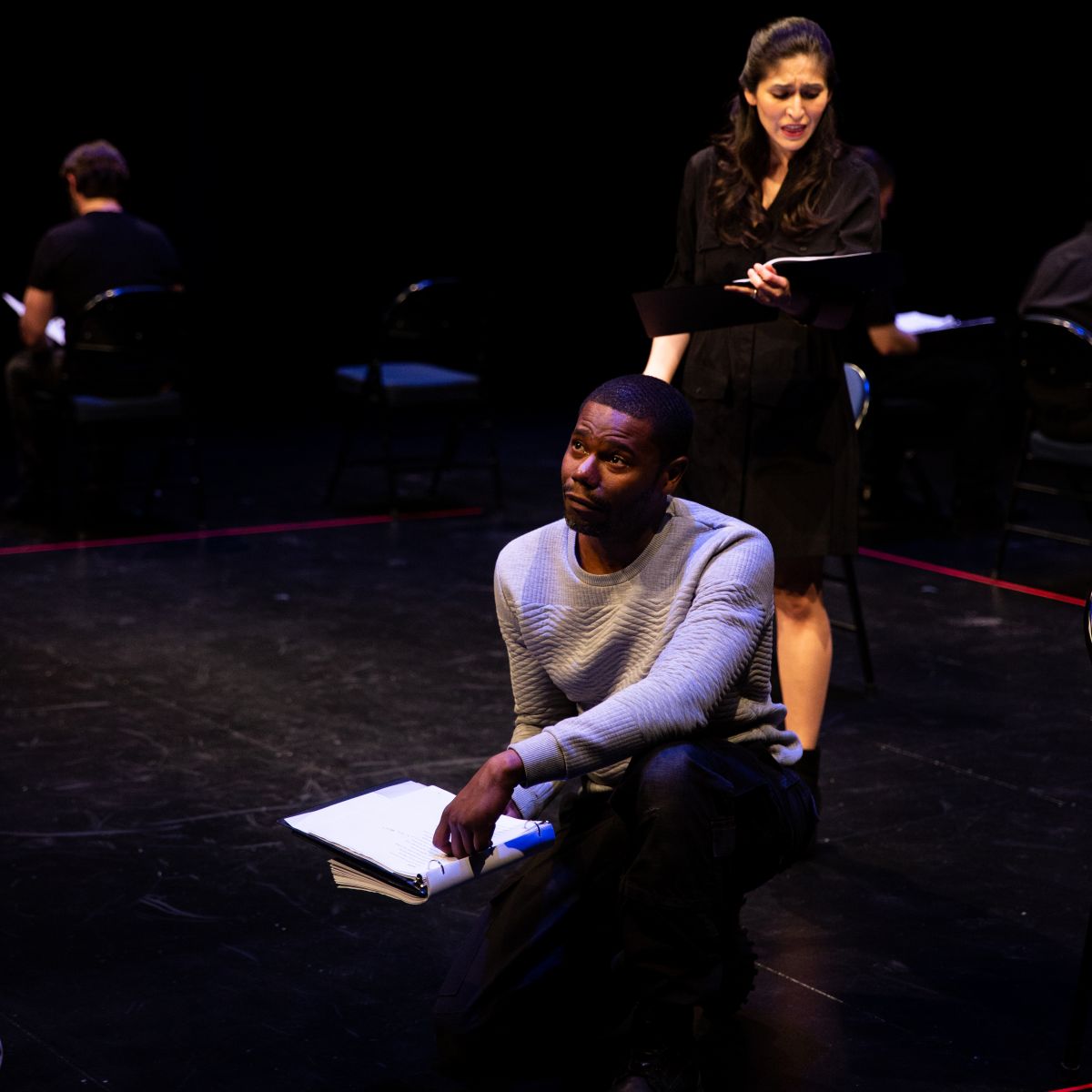 Desiree Sanchez, Artistic Director of Aquila Theatre, directed this staging and joined Wilson for a discussion after the reading, along with two members of Aquila’s Warrior Chorus: Jenny Pacanowski, a combat veteran, poet, and founder of Female Veterans Empowered to Transition (FVET), and John M. Meyer, another combat veteran who works as a playwright and performer and appeared in the roles of Poseidon and Achilles. The Warrior Chorus engages in programs that bring together the veteran community with the public and aim to help combat veterans suffering from PTSD and the long-lasting wounds of war. Young Kim, Director of Educational Programs at the Onassis Foundation USA, gave introductory remarks.

Twelve actors sat in chairs, while a female narrator began reading the poem with dramatic flair, placing emphasis on the proem’s final words: “tell the old story for our modern times.” Athena, Zeus, Hermes, Calypso and Odysseus took over, each projecting emotion as impetus for their words and actions: Athena determined to help her favorite mortal, Zeus annoyed at the criticism he receives as king of the gods, Calypso resentful of the gods’ decision to take away her lover, and Odysseus longing to return home and end his sufferings. This version did not dwell on Odysseus’ fantastical adventures, but only included episodes that directly spoke to Odysseus’ identity as a soldier: Demodocus’ song of the Trojan Horse, which shows Odysseus that his reputation as a warrior is intact; his interaction with his deceased mother Antikleia, who warns him of the suitors and encourages him to hold on to his warrior identity; and his encounters with the dead Agamemnon and Achilles, who call attention to the wounds and consequences of war as each has met a worse fate than Odysseus. The staged reading quickly transported Odysseus to Ithaka, where with the help of Athena, his son Telemachus, and his wife Penelope he comes up with the contest of the bow, slaughters the suitors, and reunites with his beloved Penelope.

After their long-awaited reunion, Odysseus and Penelope choose to spend the night telling stories to each other. Walking arm in arm in the rear of the stage, behind the other seated actors, the couple seemed immersed in the joys of hearing each other’s stories. By leaving us with this final image of the two, the staged reading suggested that story-telling can be used not only as a means to an end – Odysseus’ skillful story-telling grants him survival and his return home – but also as a source of pure joy.

The staged reading nicely brought out the contrast between the dramatic and narrative aspects of the poem: intense and emotional dialogues were interwoven with a narrator who sped things up to bring us to the next encounter or described the setting to help us visualize each scene. The suffering of each character was stressed, by each characters’ tone of voice, facial expressions and gestures, and also by the physical reactions of their interlocutors who were surrounding them and witnessing their experience. While the singer Demodocus sang the song of the Trojan Horse, for example, we witnessed Odysseus’ pain and satisfaction as he heard about his accomplishments at war. Or while the disguised Odysseus told Penelope that he encountered her husband in Crete, we observed Penelope’s reserved enthusiasm in meeting someone who had seen her husband more recently than she had.

As this staged reading suggested, Odysseus can be interpreted as a war veteran suffering from PTSD. He has intense anxiety, is overly cautious, is fixated on violence and revenge, and is overcome by his emotions. For combat veteran John Meyer, many of the poem’s scenes speak to combat veterans. The encounter with Achilles in the underworld is one of those, as many young soldiers relate to Achilles’ pursuit of honor, he said. The delayed reunion between Odysseus and his wife Penelope is another. During the conversation, discussants were asked to comment upon Odysseus’ extreme violence towards the suitors. Pacanowski explained that for her, Odysseus is a war veteran who can’t let go of violence. “It is very hard to let that go,” she said, “when that’s all you’ve trained at in the army.” In contemplating the description of the suitors’ torturous slaughter and the unease that it creates, members of the audience also commented on the humor that was elicited by the death of the most prominent Suitor Antinoos. How can such a horrific moment be humorous? And was the humor intentional? In response, Wilson suggested that overly shocking moments become humorous, while Pacanowski added that to deal with death, soldiers have to make such moments funny; “otherwise, it would be hard to get through the day,” she said.

Wilson’s translation – set in iambic pentameter – kept a rhythm going and presented the action with immediacy, vividness and harmony. Her language was easy to understand, while maintaining many of the poem’s linguistic puns and sound effects. And indeed a member of the audience who takes 13-18 year-old students from China to Greece every summer asked about the poem’s accessibility via English translations to teenagers. With a smile on her face, Sanchez suggested Wilson’s translation; Homeric Greek as well as Wilson’s translation is syntactically easy and thus accessible to readers of different ages.

The Odyssey is about difference, our experiences and their effects on our identity, Wilson told audience members. Indeed, the poem has multiple and different voices, which Wilson and Sanchez skillfully brought out in their translation and direction respectively: from the sensual Calypso to the cautious Penelope; from the naive Telemachus to the arrogant Antinoos and wise Tiresias; from the emotional Antikleia to the caring yet impulsive Eurykleia. The subsequent discussion of the poem showed that along with its many voices and perspectives of characters differing in gender, status (from the immortals to the slaves in the Ithakan household), and powers of agency, the poem invites many and differing responses; the audience members eagerly welcomed the poem, its translator, and actors and veterans at BAM and discussed how the poem and performance resonated with them, unsettled them, and provoked reflection.