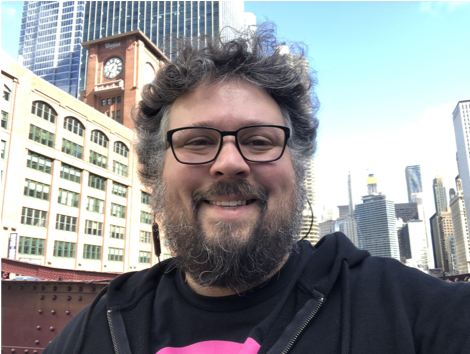 Scott Schupbach is a modern-day humanist. As an undergraduate at Grand Valley State University he fell in love with the languages and ideas of the ancient world and decided to major in classics and classical languages. Great thinkers of the ancient world from Sophocles and Epicurus to Cicero and Virgil continue to influence his worldview and guide his daily life. Like his Renaissance counterparts, Schupbach applies his classical training to new challenges.

After studying classical languages, Schupbach went on to obtain an MA in Linguistics at the University of Montana, where he researched the demonstrative system of the Blackfoot language, an Algonquian language under threat of extinction which is now enjoying something of a revival. His favorite word to (try to) pronounce is poksiksísskstakiiksi, Blackfoot for “small beavers.” At the University of California, Santa Barbara, his interests took a tech turn. When he wasn’t analyzing linguistic data and wrestling with programming languages such as Python and R, he was busy co-founding Wugbot, a student group devoted to exploring computational approaches to solving linguistic problems.

Schupbach now applies his language, research, and problem-solving skills to a career in web development. After a stint as a senior software engineer at Aspera, an IBM company, he now works at Avant, a finance and tech company. His work focuses on user interfaces and issues related to user experience with web applications. For Schupbach, the tech world offers the thrill of lifelong learning in a rapidly evolving milieu. His classical training, he reflects, taught him how to approach problems from multiple angles, to research a topic thoroughly, and to seek out those nooks where the truly interesting questions hide. The study of Greek and Latin strengthened his ability to make sense of complex structures and synthesize them into coherent systems, key skills in his line of work.

For those interested in a career in programming, Schupbach advises, “Learn JavaScript now. It’s one of the most widely used languages and isn’t going to decline in popularity anytime soon. Try to learn about the history and context of the tool you’re learning. What were things like before it? Did it actually solve the problem it set out to address? Just as it is unwise to read Plato without understanding the culture and context in which he wrote, so it’s important to understand the zeitgeist and evolution of technology in order to steer yourself in the right direction. Those early adopters that stay ahead of the trends are the most successful.” Sound like the perspective of a classicist? You bet! 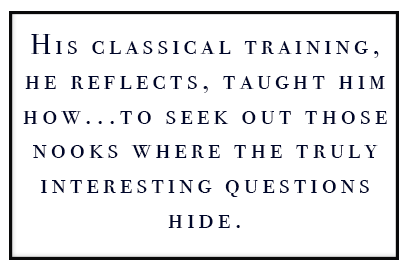 Schupbach has always found time to share his knowledge with others and put his skills to use for the greater good. In Missoula he taught ESL courses to undergraduates needing to improve their English proficiency. In San Francisco, he empowered students from demographic groups underrepresented in tech by helping them acquire new web development skills. Now in Chicago, he does pro bono web design work for a non-profit and volunteers his time teaching English to recent immigrants. “I love teaching,” Schupbach explains simply. Or, to quote from his favorite philosopher Epicurus (Vatican Sayings 27), “learning and pleasure advance side by side.”