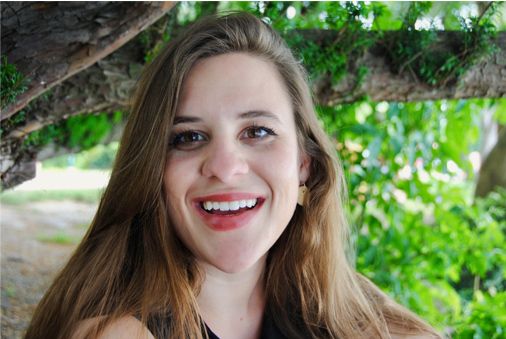 Like many millennials working in the gig economy, Annalisa Quinn (https://annalisaquinn.com/) faces a whirlwind of projects driven by unforgiving deadlines. But the work that this freelance journalist does is anything but humdrum. You can read her essays and reviews in the New York Times, Financial Times, NPR, Atlantic, and Washington Post, as well as in leading newspapers across the pond such as the Guardian, and Times Literary Supplement. Her beat is language, books, politics (especially political memoirs), ideas and ideologies, arts, culture, and breaking news stories about Europe and the U.K. She is as protean as she is prolific. Quinn treasures the freedom of her chosen career: “journalism is the best job in the world because you get paid to investigate whatever ideas you’re most interested in. You can talk to almost anybody and ask almost any question. Once I realized that, I was in.”

Quinn took her undergraduate degree from Georgetown University with majors in English and Classics, then later completed an M.Phil. in Classics at the University of Cambridge, with funding from a Cambridge Trust scholarship. Her undergraduate honors project was a directed reading of all of Homer’s poetry in the original Greek. “It was a little bit like the first time you read the bible,” she explains. “All kinds of half-understood references finally make sense.” Her classical knowledge directly informs her work as a book reviewer. “Recently I’ve reviewed Circe, the Silence of the Girls, Women and Power, and Emily Wilson’s Odyssey translation, among other classics-related books. I also love writing about words, and so Latin and Greek have been really useful.” Quinn deploys words with the skill of a surgeon. She eschews the hackneyed. In an interview for Literary Hub (12.20.2017), she notes the “standardized critical vocabulary” of most book reviews (“words like lyrical, arresting, compelling, unflinching, tour-de-force”) and their conventional building blocks. “It is thrilling when you see the elastic possibilities of a really good critic working within a confined space,” she adds. Her classical training has served her well. “Close reading is at the heart of classics, and it is also the most important part of being a book critic.” 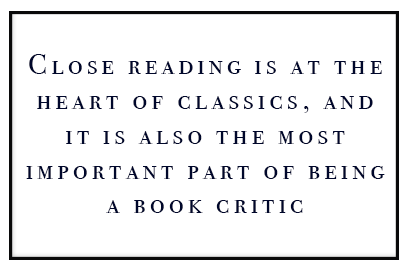 Ideas are at the heart of Quinn’s journalism, especially the history of ideas over time, a long view she attributes to her study of classics, in which “you spend time imagining eras and cultures vastly different from yours.” One recent piece for the New York Times Magazine traces the evolving history of the term “witch hunt” as used against a variety of opponents. An essay in Tin House titled “Bad apples: On the insidious myth of female entrapment” exposes the troubling motif of food used to lure and gain power over women in ancient and modern myth and fiction; in this piece examining the stories of Alice in Wonderland, Persephone, and Snow White, among others, Quinn serves up incisive criticism, searing personal anecdotes, and a recipe for poached apples. For a recent story about the Russian influence campaign she delved into the Thesaurus Linguae Latinae to uncover the fascinating religious and astrological associations of the word “influence.”

Quinn’s first reporting was for The Hoya, her college newspaper. “Writing for your student newspaper is the best way to get experience and clips, and also to find out if you like it.” Good advice to follow, though a meteoric rise like Quinn’s is not guaranteed!