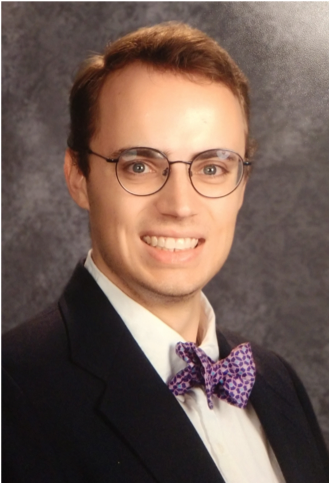 Walk into Chris Fuelling’s classroom and you are likely to find his students singing in Latin. Crowd favorites are the Salve and Vale songs, and Caput, umeri, genua, digiti (“Head, shoulders, knees, and toes”). Games are another way they learn. “My students absolutely love playing Caesar Dicit (‘Simon Says’),” Fuelling reports. “It’s an excellent way to study vocab in the Corpus (‘body’) unit,” he adds.

Fuelling is the kindergarten and first grade Latin teacher at Parnassus Preparatory School in Maple Grove, Minnesota. As a charter school, it is a tuition-free public school with open enrollment. The school has grown exponentially: there were only five seniors in its first graduating class of 2018, yet the school’s total enrollment at the time stood at around 1,100! Parnassus is one of a growing number of charter schools in Minnesota and across the United States that offer a classical liberal arts education. For many schools in the classical education movement, Latin is at the heart of the so-called trivium curriculum, which progresses through grammar, logic, and rhetoric and seeks to instill aretê, a Greek term denoting both excellence and virtue.

Parnassus draws a multicultural student body, including significant Russian and African populations. With 15% of its students being English language learners and students taking daily Latin and Spanish lessons, Fuelling notes that “many of the students are on the path to becoming quadrilingual.” Fuelling shares an office with the Spanish teacher and enjoys comparing notes with his colleague. He also learns from his students. “Some of the most special moments are when a native Russian will raise their hand and tell me how the Latin word sounds just like the Russian word for the same thing. My studies and my teaching have given me the attitude that studying different languages is like going to a large family reunion. At first you feel most comfortable spending time with the family members you see all the time (the Romantic languages), and initially feel uncomfortable starting conversations with distant relatives (русский), but then you take a deep breath, say “Hello”, and realize that you have more in common than you thought (water = вода, sounds like ‘vah-dah’).” 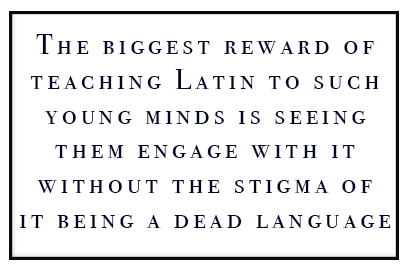 Fuelling graduated from Lawrence University with a BA in classics. He is currently teaching on a limited license (aka a variance or tier-one license). This allows him to teach for up to three years without full teaching certification. For those considering teaching Latin in an elementary school, he recommends prior experience working with children. He gained this as a Promise Fellow through AmeriCorps working one-on-one with middle schoolers. Even more essential are the personal qualities that make an inspirational teacher. Fuelling credits his mother with giving him her sense of humor and his father his patience. His love for teaching and affection for the 5, 6, and 7-year olds under his tutelage are palpable. “The biggest reward of teaching Latin to such young minds is seeing them engage with it without the stigma of it being a dead language.” Bene dictum, magister Fuelling! Long live Caesar Dicit!