Blog: Exploring the Reopened House of Augustus on the Palatine 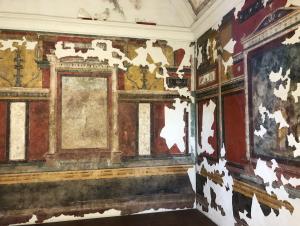 In a photo essay, Roman tour guide and classicist Agnes Crawford spoke to the SCS Blog about the newly reopened House of Augustus on the Palatine, which was uncovered by archaeologists in the early 1960s. Although it underwent extensive renovations for the events surrounding the  2000th anniversary of Augustus' death in 2014, other portions have now been reopened to the public in time for the summer crowds. Crawford also comments on the myriad restoration projects going on in Rome, Pompeii, and elsewhere in Italy. Together, these initiatives are bringing the color and grandeur of the ancient world back to life within Italy.

Bond: What is new about the casa di augusto?

Crawford: It reopened as one of seven sites which are part of the new SUPER ticket on 21 April (Rome’s birthday) after sporadic openings and long periods of closure over the last several years.


Bond: What new work is on display and what was the previous state?

Crawford: Nothing new is on display and restorations as far as I can tell are as they were for the Augustan bi-millennium in 2014, but the visit includes a good audio narration and new light projections that help with understanding the layout of the house, and its decorative programme. Frescoes are also viewed in their natural state so this is helpfully done, rather than being intrusive.


Bond: What does this add to our understanding of the Augustan period?

Crawford: It certainly helps the average visitor get a sense of how Augustus’ reign was a turning point in Roman history, as he began to blur the lines between public and private, and religious and secular life. Also it gives a sense of the elegance of grand residential decorations of the time, which can be difficult with rough ruins.


Bond: As both an independent scholar of classics and a popular tour guide in the city of Rome, what is your opinion of the macro-scale of the reconstruction and preservation work being done at various sites around Rome and Italy?

Crawford: More and more things are open than ever before (which can be seen on [Rome's] Palatine and at the Forum), and the relentless and interminable tasks of preservation and restoration are making visible headway.

This essay was just a small taste of what Rome has to offer this summer. Whether you take a self-guided tour of the Palatine or book one from Agnes, make sure to take pictures and give us here at the SCS some updates about the ancient sites you are enjoying.

Agnes Crawford is a licensed guide to the City of Rome and has 17 years experience. She runs private and tailor-made itineraries through UnderstandingRome.com. Originally from London, she graduated with an MA (Hons) in Architectural History from the University of Edinburgh in 1999 and has lived in Rome since 2000.