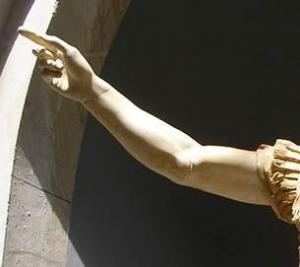 What did battle look like at the chest to chest range on the ancient battlefields of Europe and the Near East? The sheer brutality, shock, and visceral nature of Classical Warfare has intrigued classicists, historians, and military officers alike for centuries. I am among those both inspired and intrigued by the idea of battle within the phalanx and legions; I teach “The History of the Military Art (Western Warfare)” as well as lead a thesis colloquium on Greek and Roman Warfare at the United States Military Academy, West Point, NY.

Classical warfare encapsulates some of the most important lessons a cadet will study at West Point. My students study the strategic, operational, and tactical facets of this time period. Throughout our studies, we march alongside our ancient officer counterparts through the pages of works such as Xenophon’s Anabasis, Arrian’s Campaigns of Alexander, and Julius Caesar’s Gallic War. We stand with them in their phalanxes or maniples and wait. We gaze across the plains at our enemy—an enemy that we cannot dispatch with a projectile fueled by gunpowder; rather, we must end our enemy with our spears and swords, or crush their bones with shield upon shield during the othismos.

The question which many may ask is “Why is it important for cadets aspiring to be military officers to study Classical Warfare?” “What can cadets possibly learn from dead Greeks, Macedonians, and Italians?” I have developed the following answer: When cadets graduate they will become managers of violence. They will practice their craft in a sea of chaos, where mistakes are not measured in bad grades, but rather in lives. In training, armies will never be able to fully replicate the concert of violence and pulls of self-preservation that one may feel in battle. Since we cannot fully replicate battlefield conditions in training, it can be difficult to know how a leader may act. The study of Classical military history helps to fill the void where training cannot. Past battles and campaigns are the best examples to us as to how leaders will behave and make decisions while within the maelstrom. Historic battles are the cadavers for future military officers. We dissect battles and campaigns, so that we may better practice our own craft.

Conversations regarding the classics will echo with an orchestra of names such as Herodotus, Thucydides, Cassius Dio, Caesar, and Polybius. The stories as told by our classical sources can be likened to light reflecting through a crystal; the light will appear differently depending on the viewer’s perspective. The pure Classicist may look to our sources and study the devices necessary for grammar and rhetoric, in order to preserve these languages otherwise lost to the modern word. As a military historian I view the books and their chapters from a different angle.

I see them as military manuals and after action reports providing personal accounts of lessons such as personal courage, tactical flexibility, and what Clausewitz calls coup d’oiel. The sources provide us with vivid examples of military leadership, mistakes, and heroism on the tactical, operational, and strategic levels of warfare. On the tactical level, we are inspired by our audacious Athenian heroes at Marathon charging a numerical superior force, or Caesar ordering his horses away during his first engagement against the Helvetii. We are shown the difficulties and benefits of operational art with Alexander’s campaigns to the East and the march of the 10,000. With regards to military strategy, Hannibal tells us, through his victories at Trebia, Lake Trasimene, and Cannae, that one must do more than simply win battles to win wars.

War’s lessons echo throughout the pages of history with names such as Thermopylae, Luectra, Cunaxa, Issus, Alesia, and Adrianople. I know these horrible meetings of bronze, lead, and flesh were not fought in vain to drift away silently in the pages of history.There is no silver bullet formula for victory in war. However, some of the keys to success in the battles and campaigns yet to be fought reside within the pages of classical military history.

The views expressed in this article are those of the author and do not reflect the official policy or position of the Department of the Army, Department of Defense, or the U.S. Government.

CPT Antonio Salinas is from Allen Park, Michigan. After high school, Antonio enlisted in the United States Marine Corps where he served as a martial arts instructor trainer and an intelligence chief. He holds a BA in History and Political Science and an MA in History from Eastern Michigan University. During graduate school he enrolled in Army ROTC; he received his commission from Army ROTC in May 2007 as a branch detail Infantry – Military Intelligence officer and has served in both Afghanistan and Iraq. Antonio continues to serve in uniform and currently teaches military history at West Point. Antonio.Salinas@usma.edu