Blog: Immersivity and (Other) “Fantasies of Antiquity” 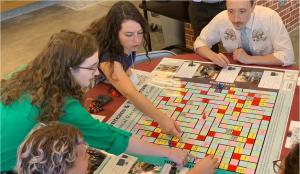 The last decade or so has seen growing interest in “immersive” representations of antiquity: representations that seem to replace a subject’s real experience of the present with compelling simulation of the past. Thus scholars have worked, for example, on “immersion” in Homer, Herodotus and Thucydides, adaptations of Aeschylus, and in postdramatic tragedies. The topic is an outgrowth of longer-standing study of “immersivity” in theater, especially contemporary theater, and in literature, where an early watershed has led more recently to interdisciplinary approaches. In the first half of this post, I sketch a theory for approaching the phenomenon; in the second half, I describe some examples centered on games.

I was invited to write this post after presenting at a conference on the topic that was hosted by Dr. Emma Cole at the University of Bristol in March 2021. The conference raised its own questions about the nature of “immersion,” since, like many meetings during the COVID-19 pandemic, it took place remotely over Zoom. In that virtual “space,” participants considered practical examples as well as problems of theory and definition: e.g., whether “immersion” should describe the subjective experience, “immersivity,” by contrast, the representation itself.

However such technical terms are distributed, students of Latin can note that the underlying idea is historically a metaphor: the Latin root merg– suggests that the subject is somehow “plunged” into the experience, as if below a surface (OLD, s.v. mergō §§1, 4; cf. Ernout-Meillet: PIE *mezg–, with reflexes in Sanskrit májjati and Lithuanian mazgóti). In context of such ancient imagery of movement across a threshold, is the shift of perception at the core of “immersion” therefore potentially “sublime”? That may depend on the subject experiencing it: is “immersivity,” like beauty, in the eye of the beholder — or in their mind?

I return to that “phantastic” possibility below. In practice, too, however, “immersivity” is intended to be translational or metaphorical, with perception “moved across” (Latin trans-ferre, OLD s.v. transferō §6, a calque on Greek meta-pherein) a boundary between experience and simulation. As in many languages including Greek and Latin, that movement can occur in space or time: immersion replaces the present, known to be factual, with something re-presented, i.e., a fictive semblance of something that is in fact absent — including pasts and futures. Brett M. Rogers and I have thus argued that imagining antiquity is like engaging with speculative fiction: in such cases, the thing represented is not present, whether no longer (antiquity is past), not yet (much science fiction is set in a future), or not ever (fantasy is in some way impossible).

If that’s right, the range of modes is revealing: immersivity can happen independently of medium and mechanism. While the most frequently cited examples involve currently prominent technologies — above all, video games including educational software), as well as some theme park rides, theater and cinema, museum exhibits, and art installations — an experience of immersion is no less possible in response to other forms of representation. In other words, we could say that “virtual reality” is not limited even to “digital technology,” much less specifically the dominant (audio)visual: what matters is the subject’s perceived experience of the reality of a given not-reality…

…a set-up which, once more, students of Greek, Latin, and their literary cultures may recognize as reflected in ancient “technologies,” or technai. In general, we could say that immersivity works as a kind of irony, in which one thing is represented while another is evoked: i.e., a “representation of antiquity” that, if compelling, is experienced not as “representation” but as “antiquity” itself. More particularly, that movement from knowledge of fictive representation to experience of as-if factual presence is already analyzed in ancient rhetoric, as the capacity of ekphrasis (“description, expression”) to achieve enargeia (“sharpness, vividness”) and therefore produce phantasia, precisely “an image in the mind’s eye.”

Surviving ancient ekphrasis often consists of verbal (poetic) description of visual (plastic) art, a kind of transmediation or intermedial translation. But, in theory, ekphrasis is any “representation of representation,” i.e., transmediation regardless of medium; regardless, too, of sense-modality in the subject’s experience of the image; and regardless, finally, of the reality of any object separate from the ekphrastic image. Paradigmatic ancient examples thus make clear how ekphrasis need not be of anything real: descriptions like that of Achilles’ shield in Homer’s Iliad offer representations of things that are not “things,” i.e., not actual objects but only virtual images.

From this historical perspective, ekphrasis resulting in enargeia as a mechanism for phantasia adds to immersivity insofar as it is conducive of an experience of “hyperreality,” in which the potential reality of any object is replaced by the actual perceptibility of an image. Thus scholars have likewise argued that enargeia is an ancient predecessor of immersivity. With the possibility of immersive experience thus ranging over what actually was, what might have been, what could not have been, and what was not, “immersivity” takes its place among other enargeic ekphrastic phantasiai — or, in a word, “fantasies of antiquity.”

Although scholarly interest has burgeoned in response to certain prominent technologies, then, those are only the most recent forms of an ancient tradition of immersive technai, open to study via “media archaeology.” I had the good fortune to explore that possibility with student research fellows over summer 2019, surveying more than 200 games involving classical receptions and immersing ourselves in some dozens of those (Figure 1). 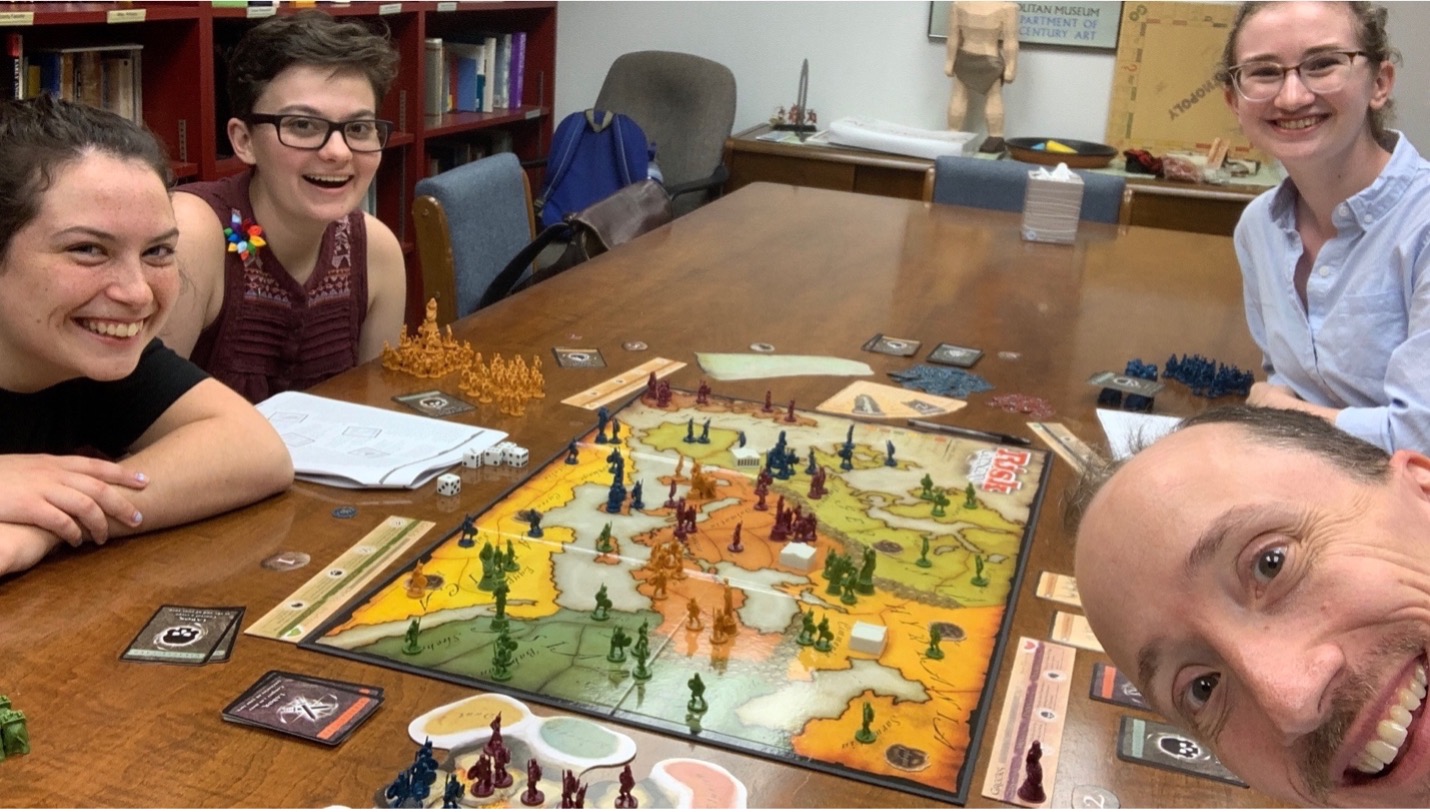 As pictured here (Figure 2), Lizzie Ruetschle ’21 (left) focused on depictions of “others,” including barbarians, in video games, while Hannah Friedrich ’21 (right) considered the labyrinthine plots of tabletop games and role-playing game adventures. We were often joined by their friend Oliver Bjeletich ’21 (second from left), a Philosophy major, who helpfully demonstrated what can be done within a game’s system (paideia) that is separate from its stated goals (ludus) a distinction borrowed from Roger Caillois’ pioneering study of games. That mixture of research focuses and approaches to gameplay paralleled the games’ own intrinsic mixtures of history and fantasy. Indeed, the games were — remarkably, if not surprisingly — immersive even when history took second place to fantasy.

As an example, we are shown here playing Risk: GodStorm, in which five “ancient” societies — Greek, Egyptian, Celtic, Norse, and Babylonian — vie for control over the Mediterranean basin, the not-yet sunken continent of Atlantis just past the pillars of Heracles, and the Underworld. Those properly fantastic or unreal elements are of a piece with the game’s mechanics, in which each society has a “pantheon” of four gods with strategic powers affecting gameplay, representing Sky, War, Death, and Magic: a notional quartet that we guessed was modeled on an image of Greek gods (Zeus, Ares, Hades, and Hestia) and then applied schematically across the board; thus, e.g., the corresponding Egyptians gods are Ra, Set, Osiris, and Isis (Figure 3). The Underworld, too, is broken into five equal locations, such that Greek Elysium is matched by Egyptian Duat (Figure 4). 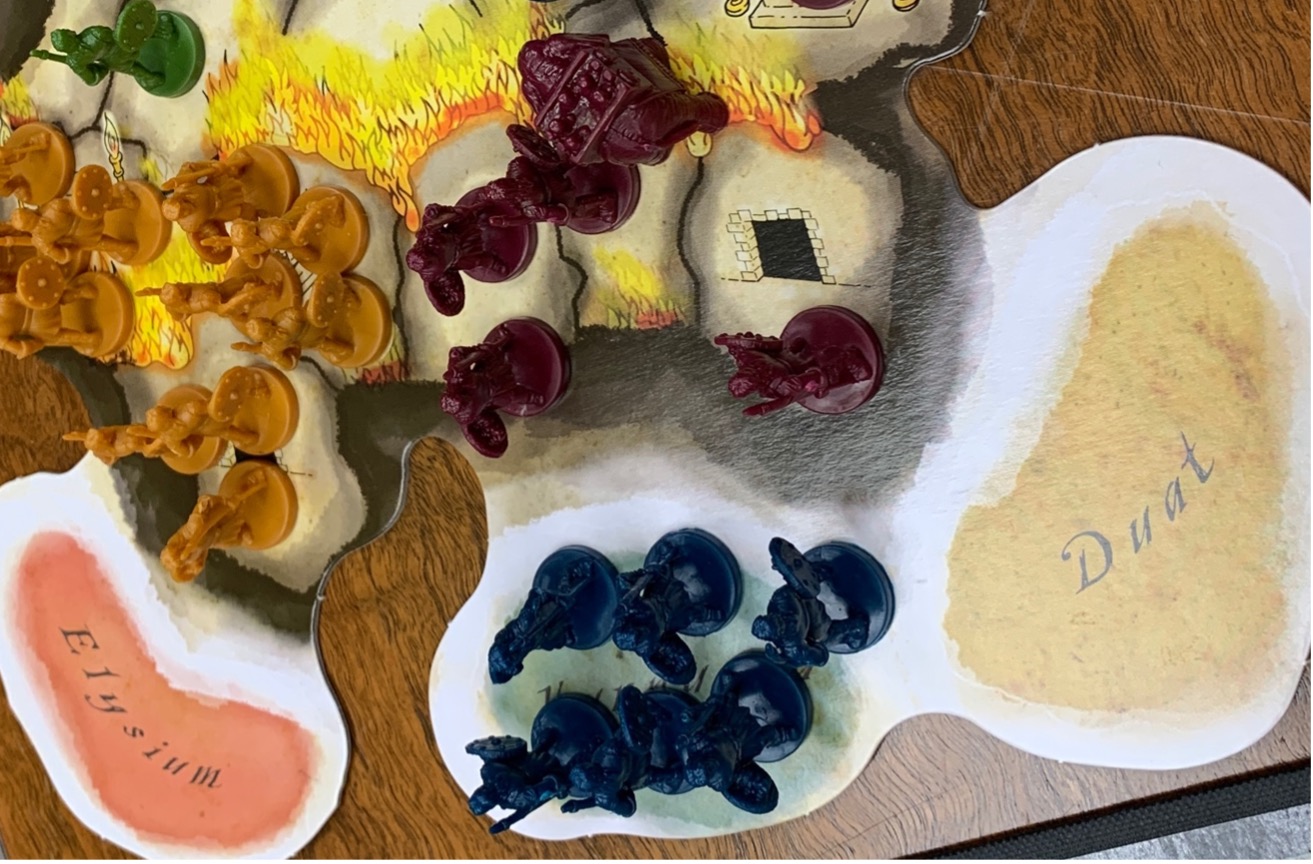 Figure 4: Underworld with Elysium and Duat from Risk: GodStorm.

Although the game is not digital, the experience of playing it was deeply immersive: lost armies were anguished over (Legiones redde!), divine intervention was accompanied by (divinely?) inspired extemporaneous sound effects, and as the game’s cyclical turns went on, linear present time passed unheeded — what musicians, athletes, and others describe as “flow.” Acknowledging that the premise is fantasy — as on the game’s cover (Figure 5), where Zeus squares off against Thor, since, although the former is chief Olympian, in the game’s iconic logic, he must fight a fellow lightning god — nonetheless we found ourselves drawn in, with historical knowledge giving way to the game’s collectively generated diegesis. 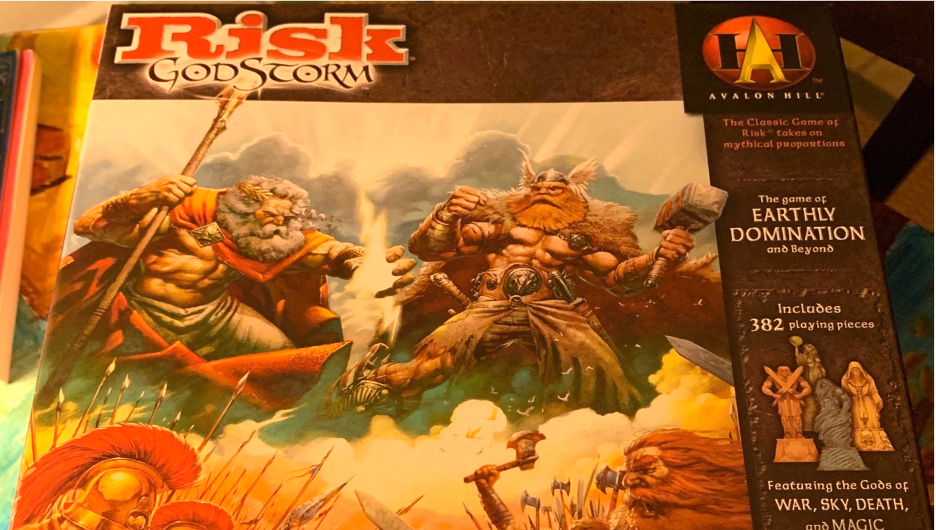 Antiquity was a starting point for immersive fantasy. Playing Risk: GodStorm and other such games (7 Wonders, Assassin’s Creed: Odyssey, Divinity Derby, Lego: Minotaurus, Zeus on the Loose, etc.) with an eye on media archaeology, however, also deepened our shared sense of classical receptions. When games ended and present time resumed, we debated — read: shouted about — inaccuracies, traditions of misrepresentation including exoticization, and the fairly narrow range of games’ theories of history (as in the Civilization series, engrossing in some relation to its evolutionary image of culture).

By the end of that summer, the students redoubled ironic — self-conscious but no less compelling — fantasy by writing themselves into the history of representing antiquity in games. They made game pieces of their own, including a 3D-printed minotaur, pictured (Figure 6) next to a Cerberus figure from the Getty Museum, to my mind very much in the manner of iconic modern fantasies of antiquity like Ray Harryhausen’s creature work for Clash of the Titans (1981; Figure 7). 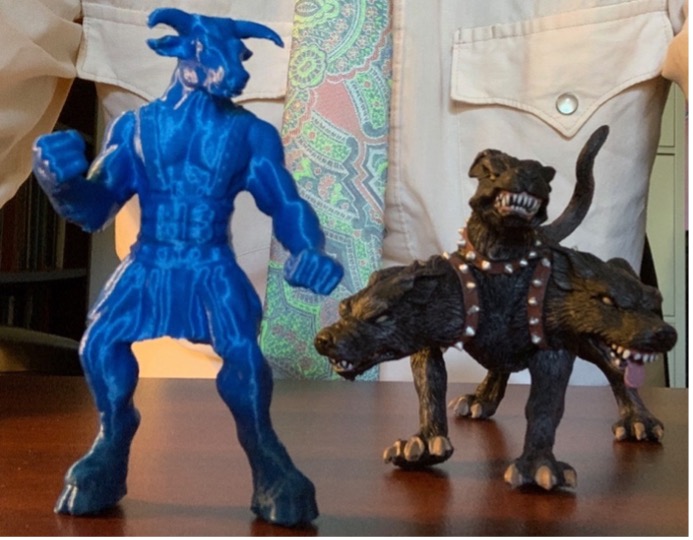 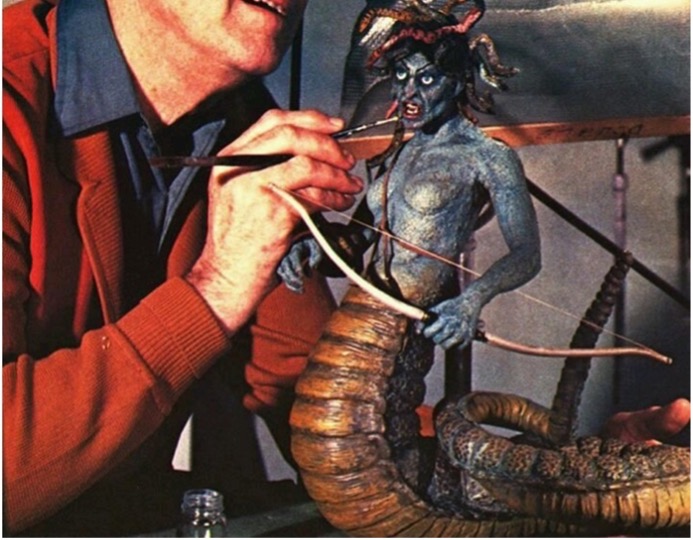 Figure 7: Ray Harryhausen working on model of Medusa for Clash of the Titans.

Furthering the parallel, that Minotaur formed part of the game shown below (Figure 8), which the students designed as an immersive representation of their own experience of learning how to study classical receptions in games: “Atlanteans & Barbarians.” Pictured here at the end of that summer’s research symposium (Figure 9), we perhaps unconsciously and certainly ironically echoed other depictions of classical receptions as immersive games: e.g., to draw again from Clash of the Titans, Zeus’ collection of human action figures, complete with scale-model amphitheater playset (Figure 10). 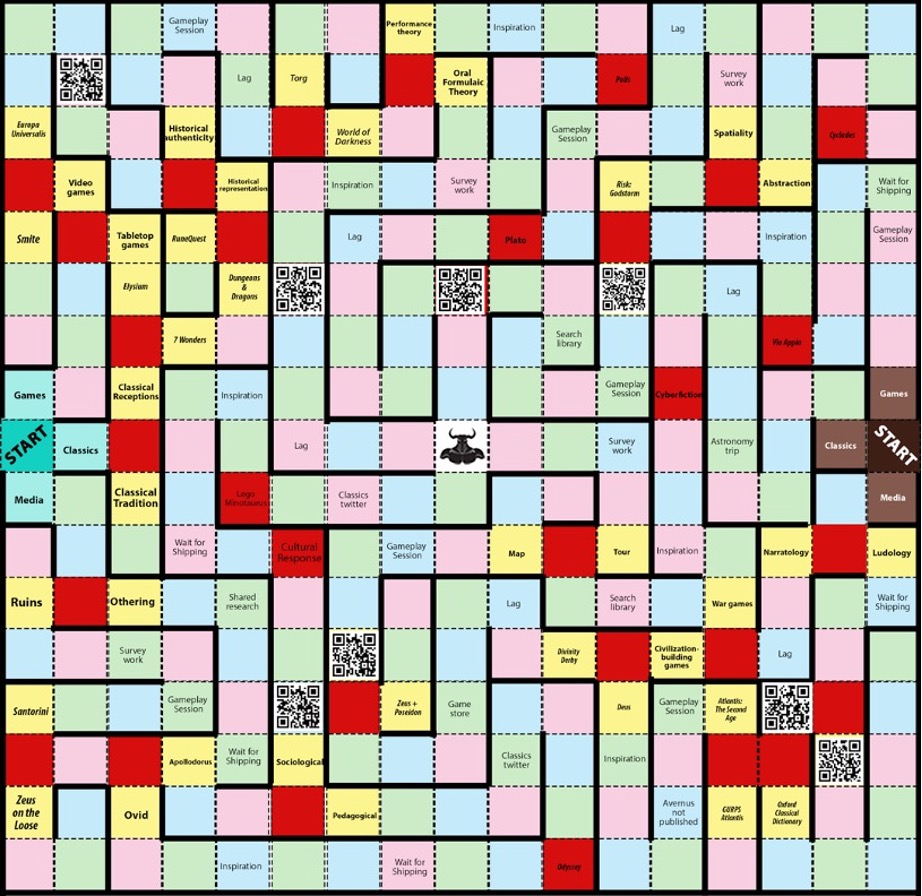 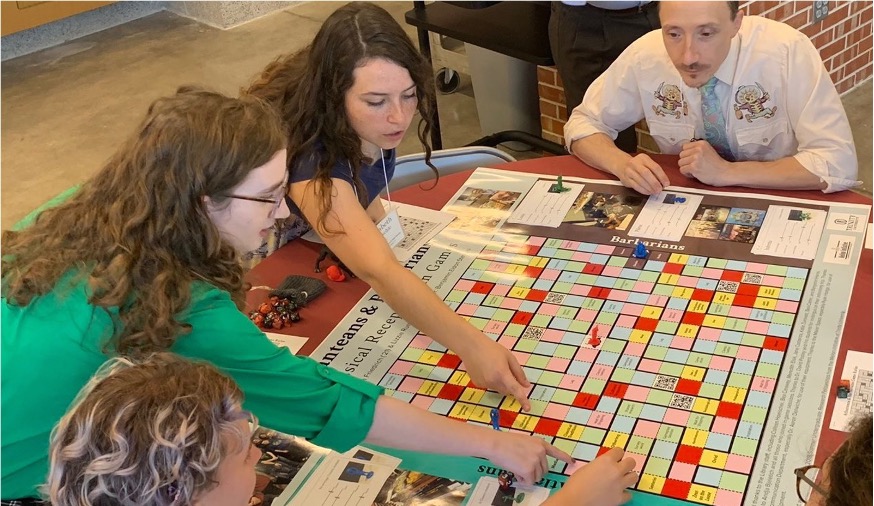 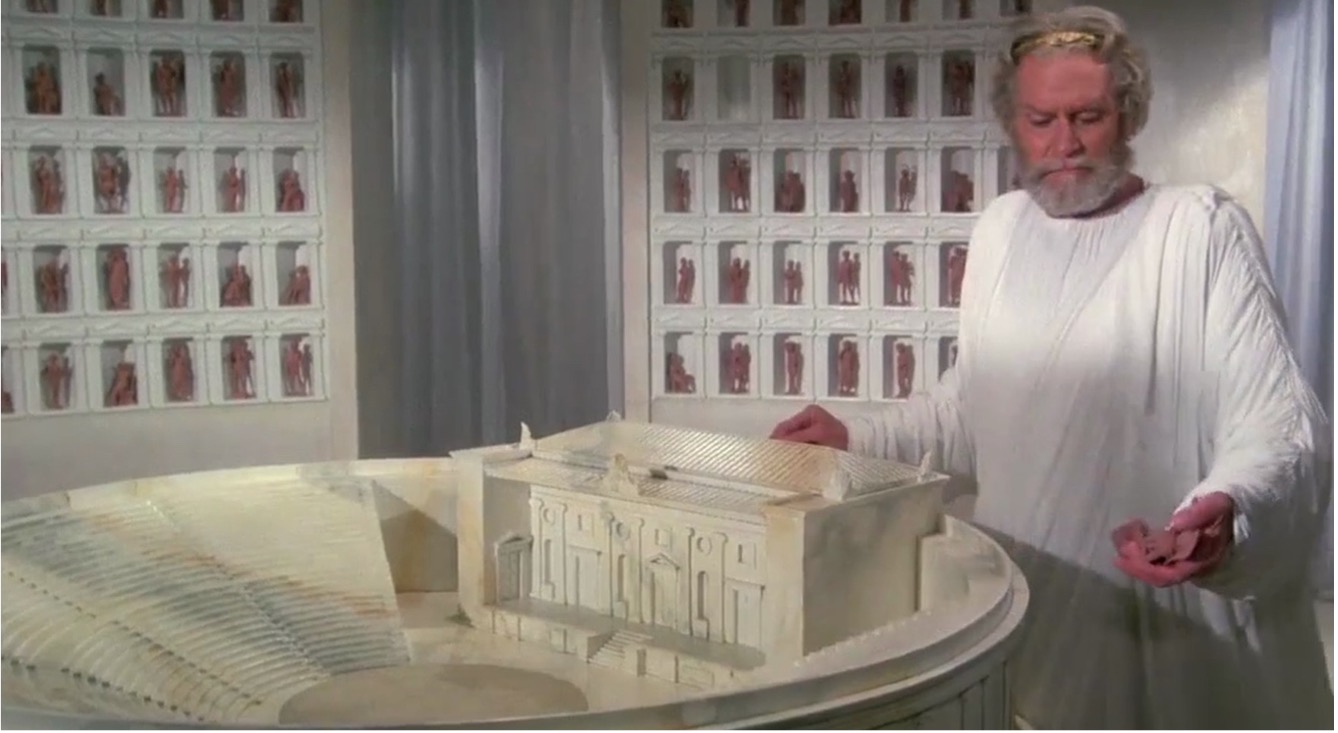 Figure 10: Zeus with his human action-figures and amphitheater playset from Clash of the Titans.

Working with these sorts of games, we found ourselves immersed not only in real-time play but also in the longer-term experience of reflecting on our own underlying images for “antiquity” — even the “rules,” conscious or not, according to which we believe it works. Perhaps the highest value of studying immersive representations of the past, then, is the vivid realization that all such mental images, all understandings, are fundamentally “fantasies,” phantasiai. They need not be mistaken, but as images or representations they are, by definition, different from their objects: an irony that helps make possible profound immersion in endlessly changing fantasies of antiquity.

I thank T. H. M. Gellar-Goad for the invitation to write this post. The research on games described above was supported in part by Summer (2019) Undergraduate Research Fellowships from the Mellon and Murchison Committees at Trinity University.

Dr. Benjamin Eldon Stevens works in two main areas: (1) ‘classical receptions,’ i.e., how ancient materials are transmitted and transmuted in more recent sources, with focuses on underworlds and other afterlives, speculative fiction, and film; and (2) the ancient Mediterranean world, especially Latin literature and Roman history, focusing on sensory anthropology and ancient ideas about language. He has published four co-edited volumes of essays on receptions in science fiction and fantasy, a monograph on silence in the Roman poet Catullus, and numerous articles; he is also a published translator of French and Spanish. A graduate of the University of Chicago (PhD 2005) and Reed College (BA 1998), he has taught at Bard College, Hollins University, Bryn Mawr College, the University of Colorado at Boulder (his home town), and most recently Trinity University in San Antonio, Texas. Outside of academia, Ben enjoys learning new languages (currently Icelandic) and baking. See more about Ben at https://www.beldonstevens.com/

01/24/2022
Blog: RU an Antígone?
RU an Antígone?, a play based on Sara Uribe’s Antígona González, was performed by Rockford University students on...
01/21/2022
Blog: News from Vermont: The Ambrose Graduate Fellowship in Classical Languages
Happy news and an update on affairs at UVM. A generous gift from Emeritus Professor Z. Philip Ambrose will let...
01/18/2022
Blog: Asterion: Making Neurodiversity Visible in Classics
As an autistic classicist, one of the things I’ve always struggled with is social interaction. In class, I teach...
01/09/2022
Blog: Inclusive and Culturally Responsive Teaching in Classics
Like many educators, I have found myself in an endless loop lately of thinking and rethinking my teaching...
01/07/2022
Blog: A Digital Ethnography of a Conference in a Crisis
To write about the Capitol Insurrection, as the one-year anniversary approached, I went back through my chat logs...
END_OF_DOCUMENT_TOKEN_TO_BE_REPLACED