Blog: Roma, Amor: Inside the Column of Trajan and Under the Pantheon Oculus 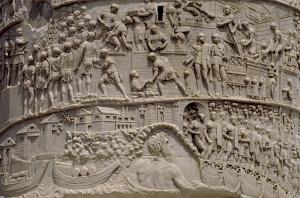 In her monthly SCS column, Dr. Cate Bonesho provides a photo essay recounting her trip inside of Trajan's Column and underneath the oculus of the Pantheon during Pentecost.

Living in Rome has its perks. In addition to the amazing food and constant museum visits, there are a couple opportunities that are impossible to pass up. This past week in Rome, I took part in two of these events and, in the process, was able to cross two items off of my bucket list: climbing Trajan’s Column and watching the rose petals drop from the oculus of the Pantheon on Pentecost.

The Imperial Fora from the Viewing Platform of Trajan’s Column. Image by Catherine Bonesho, unpublished.

As a Fellow at the American Academy in Rome, I had the opportunity to climb Trajan’s Column with some of my co-Fellows. Trajan’s Column, located within the Imperial Fora, commemorates Trajan’s victory during the Dacian Wars (101-102 CE and 105-106 CE). Possibly designed by the famous architect Apollodorus of Damascus, the approximately 98-foot structure was dedicated in 113 CE and includes continuous reliefs that depict various scenes of the Roman wars with the Dacians. Upon accessing the site, one immediately notices the size of the Trajan’s Column and its base, as well as the large dedicatory inscription. The last line of the inscription was partially cut away in the middle ages as part of its reuse for the church of S. Nicola de Columna.

After inspecting the base, I made my way through the door and began the journey up the stairs to the viewing platform. In climbing the column, one loses access to the scenes of the Dacian Wars; however, one can find scene-by-scene views of the reliefs from the project of Roger B. Ulrich, "Trajan’s Column in Rome: The History, Archaeology and Iconography of the Monument." Because the stairs start in the base of the column, the stairway is initially square-shaped before becoming spiral all the way to the top.

As my co-fellow Brandon Clifford, Assistant Professor in the School of Architecture at MIT, who walked up the stairs with me recounts: “What impressed me the most is the human dimension of the stairs. These are not built for utility alone but are a comfortable stride that transitions from a square to a circular plan. The resolution of that transition is geometrically clear in the drawings, but the experience of taking those steps was no chore.” The windows in the stairway also speak to the ease of ascending Trajan’s Column. Though the spiral stairway is somewhat dark, these small windows light your way all the up.

View of Trajan’s Column from the South. Image by Catherine Bonesho, unpublished.

After climbing the 185 steps of Trajan’s Column, I arrived at the viewing platform, which provides an amazing view of the Imperial Fora. From this height, it was easier to gage to overall magnitude of the Imperial Fora and to ascertain what it may have been like to walk through these buildings nearly 2000 years ago. Climbing Trajan’s Column was such an exciting opportunity. It also provided me with a new perspective which I will never forget.

A View Looking Out One of the Windows of Trajan’s Column. Image by Catherine Bonesho, unpublished.

Less than one week later, on the Christian holiday of Pentecost, I stood in line at the entrance to the Pantheon to witness the dropping of the rose petals from the oculus with two Fellows of the American Academy in Rome: Lauren Donovan Ginsberg, Assistant Professor of Classics at University of Cincinnati, and Jennifer Birkeland, Assistant Professor of Landscape at Cornell University. The ancient Roman temple of the Pantheon was later consecrated as Santa Maria ad Martyres in 609 CE and still functions as a Catholic Church. On the holiday of Pentecost, rose petals are hauled to the top of the Pantheon by the vigili del fuoco (firefighters) and after mass, the vigili del fuoco drop the rose petals through the oculus to symbolize the descent of the holy spirit in the image of tongues of fire.

The Pantheon in the Morning. Image by Catherine Bonesho, unpublished.

Up bright and early at 5:00 am on Pentecost, we arrived at the Piazza della Rotunda to find ourselves alone in front of the ancient temple, a rare moment of solitude in the eternal city. Only an hour later, countless others joined us to wait in line to witness the dropping of the rose petals (“La pioggia di petali di rose”). The Pantheon has always been my favorite building in Rome. After spending a little over six hours both outside and inside the Pantheon, I saw the building in a whole new light. I finally had the excuse to track the movement of light from the oculus in the Pantheon. This worked in tandem with hearing the acoustics of worship in the ancient temple. As a sort of epic conclusion to the day’s Pantheon festivities, I was able to see thousands of red rose petals fall through a window in the sky.

Rose Petals Falling from the Oculus of the Pantheon in Rome. Image by Catherine Bonesho, unpublished.

With some rose petals as mementos, I can say that that I now have a new appreciation for both the Pantheon Trajan’s Column. I guess Rome can still surprise me after these many months here. And it just goes to show that experiencing the light, sound, smells, and perspectives of a monument can completely transform your relationship with it.

Rose Petals Falling into the Pantheon in Rome. Image by Catherine Bonesho, unpublished.

Header Image: Trajan’s Column: detail of frieze reliefs (image via Flickr by MCAD under a CC BY 2.0)

END_OF_DOCUMENT_TOKEN_TO_BE_REPLACED
Conferences, Lectures, and Meetings
Webinar: Learning from the Past: Classics and the Contemporary World