Blog: Sites of Memory and Memories of Conflict: Imperial Rome, Jerusalem, and Nero 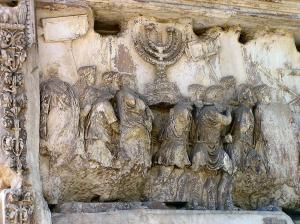 The Circus Maximus, the Colosseum, and the Roman Fora. What could be more Roman? These sites typically exemplify the power of the ancient Roman Empire and its lasting impact on the modern world. These are some of the definitive sites to visit on any trip to the eternal city, but how did these sites contribute to imperial propaganda and memory?

Lauren Donovan Ginsberg, Assistant Professor of Classics at the University of Cincinnati and Fellow in Ancient Studies at the American Academy in Rome and I recently organized and led a tour in Rome, entitled “Sites of Memory and Memories of Conflict: Imperial Rome, Jerusalem, and Nero,” asking just this question with the trustees of the American Academy in Rome. The Flavian dynasty, after the fall of Nero and the disastrous Year of the Four Emperors, built or added to many of modern day Rome’s most iconic buildings: the Colosseum, the Arch of Titus, the Circus Maximus (adding a triumphal arch at the eastern end), and the Templum Pacis (Temple of Peace).

These buildings were not only built or renovated on the ashes of Nero’s Rome but were also literally built from the spoils of the Roman conquest of Jerusalem. Lauren and I decided to combine our research interests to investigate the interconnectedness of the cultural memory of Nero and the sack of Jerusalem in Flavian propaganda. As Lauren recounts, the Flavian constructions in the city of Rome acted as “museum spaces devoted to celebrating these two victories (one foreign, one domestic), as part of a wider strategy for communicating global security.” I will now lead the reader through our tour of these constructions and briefly provide the talking points discussed at each of these sites.

Lauren and I began at the Circus Maximus and its triumphal arch, erected in 81 CE at the eastern end of the Circus Maximus, commemorating the Flavian victory in the First Jewish-Roman War. Though the inscription is not fully extant, according to an 8th-9th century account, the inscription of the triumphal arch specifically mentions the city of Jerusalem (Hierusolymam) and the conquering of Judea and its people (gentem Iudaeorum). Once at the site, Lauren offered an introduction to the reign and fall of the Emperor Nero and the rise of the Flavian dynasty, paying particular attention to the geography of the city, the popularity of Nero, and his interests in games. Afterward, I gave a brief introduction to Roman rule in Judea and the Jewish-Roman Wars. Lauren and I then turned to the gigantic triumphal arch, emphasizing its size and placement in the Circus Maximus. Our audience was able to examine the remnants of this massive triumphal arch, with some remnants around the size of a small car. Overall, we wanted our audience to observe that the placement and size of an arch that commemorates the Roman conquest of Judea in the Circus Maximus not only memorializes the Flavian victory but also effectively reidentifies a place once primarily associated with Nero as a seat of Flavian power.

Our tour then turned north to the Colosseum, built during the reigns of the Emperors Vespasian and Titus on the former grounds of Nero’s Domus Aurea. Though we did not enter the Colosseum, we located the building in our study of the memory of Nero and Jerusalem, especially the fact that the Colosseum was funded from the Roman conquest of Judea. As we passed the Colosseum on our way to the Arch of Titus in the Forum, I read aloud Josephus’ account of the triumph over Judaea celebrated by Vespasian and Titus upon their return to Rome after the First Jewish-Roman War (Jewish War 7:123-57). In this walking tour then, Lauren and I, as well as our audience, acted out in a way the triumphal procession of the Flavians to the Arch of Titus in the Forum.

Arch of Titus in the Forum

At the end of our trek from the Colosseum, we arrived at the Arch of Titus, erected in 81 CE by Domitian, the brother of Titus. The famous triumphal arch depicts the triumphal procession of Vespasian and Titus, with their booty from Judea and the Temple in Jerusalem, including the menorah, and typically is seen as the very representation of the intersection of the Roman and Jewish worlds in antiquity. After discussing the polychromy of the Arch of Titus, specifically the recent work of Steven Fine, I spoke about the reception of the Arch of Titus and the conquest in Jerusalem from various Jewish perspectives. I emphasized that the memory of the Roman conquest of Jerusalem was not just foundational to Flavian propaganda, but also played an important role in the tales of the foundation of rabbinic Judaism.

Finally, Lauren and I led our audience to the viewing platform for the Templum Pacis, another site funded by the conquest of Jerusalem. Lauren related how the construction of the site emphasized pacification and public space to showcase the spoils not only of the First Jewish-Roman War but also the spoils of Nero’s vast palace. The Flavian construction of the Templum Pacis and its museum-like quality showcasing these spoils emphasize the Flavian conquest of Jerusalem and their ascent to power after the demise of Nero (and the power vacuum it created). It is only after settling these two conflicts that Rome attains what the Flavians could call peace.

Our tour focused on some of ancient Rome’s most famous and prominent buildings and highlights the intersections of the ancient Roman world. The Flavian construction of these buildings to emphasize their conquest of Judea and Jerusalem and also to rewrite the memory of Nero show how these ancient sites are sites of propaganda. On your next visit to Rome, it is our hope that one remembers that Rome’s most iconic buildings were not just commemorations of Roman imperial power, but they also represent the strenuous efforts of a few, in this case the Flavians, to assert that power through the memory of the conquest of Judea and the demise of Nero.

Header Image: Relief on the Arch of Titus of the emperor Titus' triumphal procession wherein the treasures of the Jewish Temple in Jerusalem are being displayed to the Roman people (image via Wikimedia and is in the Public Domain).

04/13/2022
Blog: Two Years Later: “Classics” after Coronavirus?
In an April 2020 post for Eidolon, I gathered predictions on “classics after coronavirus.” Two years later, it’s...
04/08/2022
Blog: Ancient Worlds, Modern Communities: Increasing Accessibility for the Study of the Ancient World
The Ancient Worlds, Modern Communities initiative (AnWoMoCo), launched by the SCS in 2019 as the Classics...
03/21/2022
Blog: I Love You, I Hate You: A Student’s Perspective on Learning Latin
I have always enjoyed Latin class because it felt like a puzzle, much like math. Find the verb, find the noun that...
03/18/2022
Blog: Power to Punish and Authority to Forgive: Imperial State and Imprisonment in 4th-Century Antioch
Research ideas often develop out of chance encounters or unplanned circumstances. My dissertation project was born...
03/14/2022
Blog: Sampling Epic in Kendrick Lamar’s “Mortal Man”
Because it’s spirits, we ain’t even really rappin’ We just letting our dead homies tell stories for us....
END_OF_DOCUMENT_TOKEN_TO_BE_REPLACED