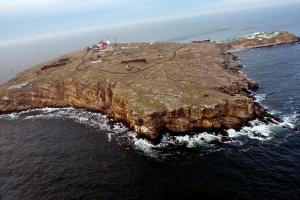 Far in the distance lies a third, positioned 20 miles off the mouth of the Danube. This is Zmiinyi, or the Isle of Snakes. You can get to Berezan, but Zmiinyi has been closed to visitors since the nineteenth century. You will never visit Snake Island. 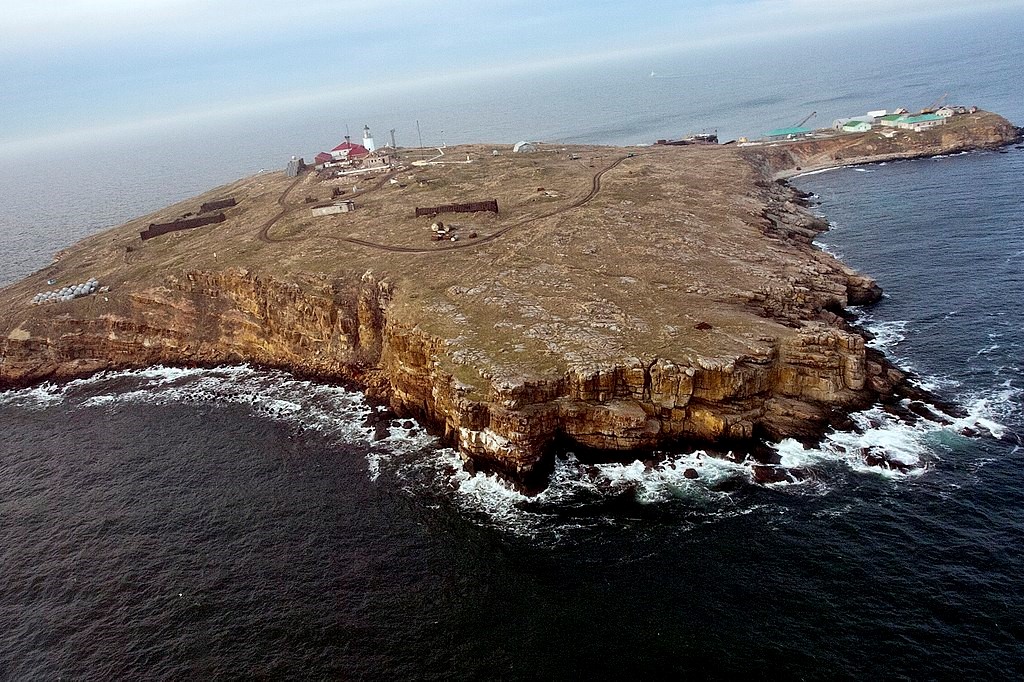 Snake Island was in the news this week. On February 25, it was shelled by the Russian Navy, supposedly killing 13. A few days later, it now seems the Battle of Snake Island resulted in surrender and no casualties. But the story had its uses: Ukraine’s President, Volodymyr Zelensky, declared them Heroes of Ukraine for giving up their lives to defend even the bleakest rock.

Perhaps the island attracts exaggeration. There is no fresh water on Snake Island, and aside from its garrison, no residents. There are no trees. Up until the 1950s, it was notably one of the last refuges of the Mediterranean monk seal in the Pontus. In his Periplus of the Euxine Sea, Arrian would claim the birds kept Snake Island immaculate, sweeping it with their wings; anyone who has ever been to remote offshore islands would know better. Snake Island was the White Island (Λευκή) to the ancient Greeks, perhaps reflecting the presence of the birds; in modern Greek (Φιδονήσι), Russian (Змеиный), Ukrainian (Змії́ний), and Romanian (Şerpilor), its name is decidedly less welcoming.

Classicists know Snake Island pretty well. As Mateusz Stróżyński wrote a few days ago, we have copious textual attestation for the White Island in antiquity, where Thetis took Achilles and Patroclus to live undying days. Arrian notes Achilles’ kindliness towards sailors, and indeed, Leuke was home to one of several Achilles sanctuaries that marked the approach to Olbia, the great ancient Greek city of the Bug-Dnieper region.

These sanctuaries for the son of Peleus were “beacons,” in the words of the Ukrainian archaeologist Alla Bujskikh, and took on a decidedly cosmopolitan character. They attracted merchants from across the Mediterranean, who left coins and inscribed ceramics as votives. The Olbians appear to have even erected a small Ionic temple from a relatively early point, albeit destroyed in 1843 when Russia reused its remains to build an (actual) lighthouse on the same site. No archaeological work has taken place on the island since.

Together, the two islands Zmiinyi and Berezan — both in Olbia’s orbit — served as points of arrival and departure for mariners entering the Bug-Dnieper estuary for millennia. Over a thousand years after Greeks had colonized Berezan to gain access to trade with nomads on the mainland, Varangian traders had settled the island as a waystation along the route between the distant north and Byzantium.

Of the two, Snake Island has sat in contention longer. After the Axis-aligned Romanians seized the island during World War II, the Soviet Navy flattened it; they would later build their own radar station there. If the end of the age of sail deprived Snake Island its position at the convergence of the major premodern sailing routes along the Black Sea coast, it continued to be useful in controlling access to the Danube. After the fall of the Soviet Union, the fate of the island was arbitrated between Romania and the newly-independent Ukraine; Ukraine was awarded the island, which it guarded fastidiously, whereas Romania continued to control the territorial waters off its coast. That arrangement held until the day the Russian Navy returned to Snake Island.

“Similarity,” Peregrine Horden and Nicholas Purcell write, “has often been found to mask profound underlying discontinuity.” The routes that Snake Island once commanded are no longer how people get around in the Black Sea; Snake Island mattered in the Ukrainian national imaginary as a message that its soldiers would die to defend every clod of earth.

This uneasy coexistence of archaeological remains in the combat zone should be enough to keep classicists and archaeologists watching this from afar nervous. Despite occasional tensions, Ukrainian and Russian classical archaeologists inhabit the same intellectual tradition; they mostly publish in the same language and have collaborated at sites like Berezan even through the conflicts of the past decade. But at this very moment, some Ukrainian archaeologists who routinely publish in Russian journals are in mortal peril. On the other side, Russian academicians have come out against the war.

The logic of the nation will force them to take sides. Russia’s annexation of Crimea in 2014 saw the Russian Academy of Sciences dispatch archaeologists to excavate in the newly seized territory — sometimes excavating in sight of the conflict zone. Putin stages photoshoots of himself at archaeological sites. As Ukraine and Russia are severed from one another — whether by reckless NATO expansion or merciless aggression on Putin’s part — archaeology will inevitably be drawn into the gap. Russia has long had its own exceptionalist narrative claiming direct descent from ancient Greece via its Black Sea colonies. Since 1991, Ukrainian and Russian ultranationalists have tangled over who has priority over the medieval past, with each side fetishizing its most regressive aspects. Cultural heritage mobilized in this fashion puts a target on its back. Losses so far have been incidental, but this might not be the case going forward.

Russia and Ukraine did not go to war because of antiquity. But Snake Island’s presence in the story of the war is an ominous early sign.

Christopher Stedman Parmenter is an Andrew W. Mellon Postdoctoral Fellow at the Wolf Humanities Center of the University of Pennsylvania. He received his doctorate in Classics from New York University in 2020 and has published articles in Classical Antiquity (https://online.ucpress.edu/ca/article-abstract/39/1/57/107456/Journeys-into-Slavery-along-the-Black-Sea-Coast-c?redirectedFrom=fulltext), Classical Receptions Journal (https://academic.oup.com/crj/advance-article-abstract/doi/10.1093/crj/clab001/6148992?redirectedFrom=fulltext), and elsewhere. His book project, entitled Racialized Commodities: Long-distance Trade, Mobility, and the Making of Race in Ancient Greece, c. 700-300 BCE, asks how and why Greeks came to see their Mediterranean neighbors—like the “gray-eyed Thracians” and “dark-skinned Ethiopians” listed by the poet Xenophanes around 550 BCE—as racialized ‘Others’ in the middle of the first millennium. While at Penn, he is serving as a national lecturer for the American Institute of America. He is also involved in the publication of his family’s Armenian-language business archive on Ajam Media Collective (https://ajammc.com/2019/11/17/george-kevork-race-law-michaelian-family/).

04/13/2022
Blog: Two Years Later: “Classics” after Coronavirus?
In an April 2020 post for Eidolon, I gathered predictions on “classics after coronavirus.” Two years later, it’s...
04/08/2022
Blog: Ancient Worlds, Modern Communities: Increasing Accessibility for the Study of the Ancient World
The Ancient Worlds, Modern Communities initiative (AnWoMoCo), launched by the SCS in 2019 as the Classics...
03/21/2022
Blog: I Love You, I Hate You: A Student’s Perspective on Learning Latin
I have always enjoyed Latin class because it felt like a puzzle, much like math. Find the verb, find the noun that...
03/18/2022
Blog: Power to Punish and Authority to Forgive: Imperial State and Imprisonment in 4th-Century Antioch
Research ideas often develop out of chance encounters or unplanned circumstances. My dissertation project was born...
03/14/2022
Blog: Sampling Epic in Kendrick Lamar’s “Mortal Man”
Because it’s spirits, we ain’t even really rappin’ We just letting our dead homies tell stories for us....
END_OF_DOCUMENT_TOKEN_TO_BE_REPLACED