Blog: The Art of Translation: An Interview with Poet Aaron Poochigian 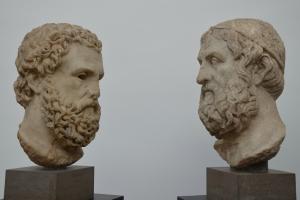 Aaron Poochigian is a poet and translator based in New York City. After receiving his PhD in Classics from the University of Minnesota in 2006 (with a dissertation on “The Staging of Aeschylus’ Persians, Seven Against Thebes, and Suppliants”), Aaron pursued a career translating Ancient Greek poetry and composing his own. His poetry has been featured in Best American Poetry 2018 (eds. Lehman and Gioia), Poetry, and Poems Out Loud. His collection, Manhattanite, won the Able Muse Book Award for Poetry (2017) and features such wonderful verses as these, about a blizzard:

Doomed, though, like ice is doomed, this wicked bright

and die the same slow way the drifts accrued,

when revolutions cut him down to crusts

and vision settles gentler on the sight. (from Blizzard Bird)

He has written translations of Sappho (Stung with Love, Penguin 2009), Aeschylus (Persians, Seven against Thebes, and Suppliants, Johns Hopkins 2011), Aratus (Phaenomena, Johns Hopkins 2010), and Apollonius of Rhodes (Jason and the Argonauts, Penguin 2014). His recent translation of Euripides’ Bacchae was performed at the Getty Villa in 2018 and will be staged at the Guthrie Theater in Minneapolis in the spring of 2020. 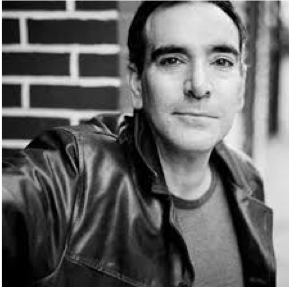 CT: Can you remember a moment from your Classics education that helped you see the value of translation? Can you think of a particularly difficult word or phrase that you had to translate and how you handled it?

AP: I remember very vividly when it became clear to me that I was supposed to learn the Classical languages and spend my life writing poetry. I was taking a survey of British Literature my Freshman year at Moorhead State University and reading Alexander Pope’s translation of [the] Iliad. The grandeur of it, and the music of the couplets, evoked a euphoric state in me. I had a similar experience with Dryden’s Aeneid. So, I am happy to say, I was inspired to be a translator by positive examples, translations that are literature in their own right.

My greatest challenge in translation thus far has been handling the Spartan “dialect” in Aristophanes’ Lysistrata. Douglass Parker infamously translated the Spartan lines into what he called “mountain dialect” (which, in places, reads like black vernacular). Henderson avoided the issue in his translation by adding a note saying that, in the original, the Spartan lines were in dialect. I wanted my Lysistrata both to render the dialect as dialect and not to be offensive. Working closely with an editor at Norton, Peter Simon, I came up with a Southern dialect that is, I think, endearing—it relies primarily on diction for its markers: “I’m fixin’ to do this,” “I reckon,” etc.

and from the quiver chose a virgin arrow

whisked him across the threshold, he himself

unnoticed as he keenly scanned the scene.

Then, crouching low beneath the son of Aeson,

he nocked the arrow midway up the string,

and, parting bow and string with both hands, shot

CT: Can you speak to the idea of translation as interpretation and whether you are actively shaping your translations through your own understanding of a text? Have there been moments when your translation made you reevaluate the meaning of a poem that you thought you already understood?

AP: Yes. Sappho fragment 22 gave me a great deal of frustration. I translated the Greek in a variety of ways again and again but, for the longest time, had no idea what was going on: Why does the speaker, who calls Abanthis “gorgeous,” want her to focus her attention on Gongyla rather than on the speaker? The poem clicked for me when I realized that the speaker is using an alternative form of seduction—trying to get Abanthis aroused by thoughts of Gongyla, so that the speaker can then take advantage of that arousal:

Abanthis, please pick up your lyre,

praise Gongyla. Your need to sing

flutters about you in the air—

CT: I’m so impressed by the way you have tackled lyric (Sappho), epic (Apollonius), and drama (Aeschylus, Euripides) – can you talk about the different challenges that you have faced when moving from genre to genre? How have you tried to convey the different voices of, say, Aeschylus and Sappho and how have your translations influenced your own poetry (and vice-versa)?

AP: Yes, my own poetic “voice” has gone through phases that have a complex relationship with the poets whom I am translating. It is hard to pin-point cause and effect. I worked on Aratus when I wanted to revive didactic poetry (such as Pope’s Essay on Criticism) and I worked on Aeschylus when I was myself enamored of craggy, lofty language. Sappho came along when I was working on writing compressed, explosive lyrics myself. I have translated authors in every genre—epic (didactic and Homeric), drama (Tragedy and Comedy) and lyric. I have written in the same genres in my original work.

Cranes flocking past at the right time delight

Farmers who have discerned the time is right;

But cranes with deviant timing only cheer

Those plowmen who have no sense of the year.

When noisy flocks of them arrive too early.

Conversely, when the cranes come late in stray

Detachments, farmers bank on a delay

CT: What has your involvement been with the staging/production of the Bacchae? What is different with seeing your words enacted onstage vs. on the page or read at a poetry reading?

AP: I worked very closely with SITI Company on the Bacchae translation. We met for several days in New York six months before the production and worked exclusively on making Bacchae a 21st-century theatrical script. The director Anne Bogart and the actors were very frank in telling me what wasn’t coming across, and I went back to my hotel room each night and revised, revised, revised until we all were happy with the script.

The transition from translating Aeschylus for the page to translating Euripides for the stage was, indeed, challenging. The live theater audience needs not just to grasp but to feel the meaning of the lines immediately. No footnotes. So, for example, I chose to translate “Bromios” every time it occurs as the “Roaring God” so that those syllables would not be lost on the audience. It was also difficult translating the choral odes into accessible, digestible units of sense. They usually come across to contemporary audiences as relentless stretches of “wild and whirling words.” I was able to make the odes immediately comprehensible, I think, by preserving metrical responsion (Strophe/Antistrophe), that is, by breaking them back down into their original units.

CT: What are you currently reading? What are a couple recent books that have inspired you and why?

AP: Well, since you asked, I am currently reading Aristophanes’ Ecclesiazusae in Greek. It is my current translation project. Just last night I was trying to figure out how to handle Blepyrus’ (extended) threat of on-stage defecation. When I am not reading Latin or Greek, I love to read noir novels, Raymond Chandler mostly. His compressed, ironic style was very influential on my noir epic, “Mr. Either/Or.”

Poochigian’s translations are evocative and strike a balance between ancient and modern. When reading his Persians or Argonautica, one understands that this is an ancient text being brought to life in a contemporary mode. His own poetic voice lends a flair to his translations much like Ted Hughes’ Oresteia or C.K. Williams’ translations of the Bacchae or Trachiniae. Poochigian’s respect for the Greek comes through in every line and I have found that his translations have helped me (and my students) to make intratextual and thematic connections. This is a poet who respects poetry of all genres and his translations reflect his poetic sensibility and serious devotion to his craft.

09/21/2020
Blog: How Might We Gamify Ancient Greek?
In last year’s introductory Greek class, I watched a student rejoice when asked to give a (partial) synopsis of...
09/07/2020
Blog: The Grammar of our Discontent: Ovid, Wishes, and the Virtual Term
Unattainable wishes for the present or past may be entirely reasonable. – Smyth’s Greek Grammar, “Wishes” §...
08/31/2020
Blog: Classics Everywhere: Promoting a Passion for the Ancient World in the Midst of a Pandemic
The Classics Everywhere initiative, launched by the SCS in 2019, supports projects that seek to engage...
08/17/2020
Blog: In Memoriam: Remembering Vergil Scholar William Robert Nethercut
William Robert Nethercut, 84, passed away on August 14, 2020. He was born to the late Robert and Constance...
07/31/2020
Review: The Duolingo Latin Course
After many years of offering free language courses to students of popular modern languages such as French, Spanish...
END_OF_DOCUMENT_TOKEN_TO_BE_REPLACED