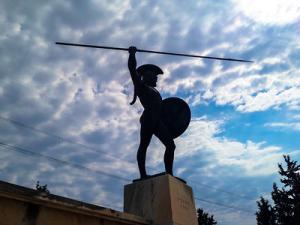 From the early 1970s, heavy metal music also developed as a reactive expression of social alienation; adopting the sound, style, and symbols of a counterculture that rejects and inverts the mainstream in a manner similar to Punk’s development as a rejection of Disco. Yet while ancient laconophiles sought an orderly and virtuous society, metal has often had very different aims. To the founding mother of the academic study of metal, Deena Weinstein, metal’s spiritual core is a sort of ditheism of Chaos and Dionysus, forces that simultaneously disrupt systems of order, conformity, and control and liberate the animal instincts of the individual.[1] In such a paradigm, historical themes of Spartan warriors fiercely defending their freedom against the tyranny of a numerically superior foe are at home on a heavy metal record.

The field of reception studies has long recognized how Classics is received in music. The past decade in particular has established scholarship on heavy metal classicism in journals ranging from Syllecta Classica to Metal Music Studies, while the first edited volume on the topic by KFB Fletcher and Osman Umhurhan is fresh off the presses. Fletcher provides an excellent introduction to the study of Classics in heavy metal in an article syndicated to this blog. As this scholarship reconstructs, over the past four decades, a growing number of bands have addressed a broadening range of subjects from Greco-Roman myth, history, and even philosophy. There are some topics that predominate, such as epic heroes and heroines, Alexander the Great, and emperors like Caligula and Nero. The Spartans, especially those 300 who stood and fell at Thermopylae under king Leonidas in 480 BCE, are among these most popular subjects.

Sparta-inspired songs comprise roughly 10% of the over 1,000 classically inspired metal songs I have catalogued with the help of the Encyclopedia Metallum, a database of all metal bands with recorded material. 94 bands from 30 different countries across the globe each have at least one such song (including three concept albums), and in nearly every subgenre, from traditional heavy metal to death metal. Of these, the 18 from Greece form a plurality: in this they join the wider subgenre of Greek and Italian bands Fletcher dubs “Mediterranean Metal.” This subgenre celebrates ancient Greek and Italian heritage in a similar manner to how Scandinavian bands and “Viking Metal” honor their own ancestors.[1] And like their Nordic counterparts, Mediterranean Metal’s narratives of the past often draw as much from historical depictions seen in popular and “Hollywood” constructions of events, as they do from the primary and secondary sources. This music video by the Greek band Firewind, which mimics the Zack  Snyder film 300 is just one example of this tendency.

It is surprising that Mediterranean bands do not make up the majority in terms of bands who favor Sparta. The Lacedaemonians’ allure goes well beyond Hellenic national pride. While ancient history and myth became fodder for metal bands like Iron Maiden in the 1980s, it was not until 1998 and the publication Steven Pressfield’s historical fiction Gates of Fire and Frank Miller’s graphic novel 300 that popular culture began advertising Sparta as an attractive theme  within the zeitgeist. The first such song, “Moment of Truth” by the American band Stormtroopers of Death, celebrates the 300’s preference to “die on their feet than live on their knees.” Within a year or two of the premiere of 300 in 2006, dozens of songs were recorded that draw heavily from the movie’s plot, themes, imagery, and dialogue (derived from ancient sources) such as “tonight we dine in Hell,” “molōn labe (come and take them),” and that Simonidean epitaph that connects these artists to the first who memorialized Thermopylae in verse: “stranger, go tell the Spartans that here, obedient to their words, we lie.”

This is not to say that bands have not gone directly to the ancient sources as well. Plenty are faithful to Herodotus’ account and to quotations attributed to the Spartans. The Greek band Zemial’s song “Ἢ τὰν ἢ ἐπὶ τᾶς” (Either with it or on it) even quotes the battle cry from Aeschylus’ Persians in order to give the Thermopylae legend a more panhellenic flavor. It is no surprise that Thermopylae is the focus of heavy metal laconophilia, as elsewhere, and by the numbers the most popular ancient battle in metal, with the Roman battles of Alesia (52 BCE) and the Teutoburg Forest (9 CE) not far behind. Such underdog narratives of defiance and resistance to systems of control, often combined with the retrieval of cultural heritage perceivedly threatened by modernity, strike a harmonious chord within the psyche of metal.

Beyond the universal symbolism of defiance represented by the Spartans, they are also a vehicle of escape that additionally serves to express an independent power and masculinity. In this sense, metal bands resemble Homer and Hesiod looking back on a golden age of heroes who hurled stones across the battlefields of Thebes and Troy that three men of their own day could not even lift. Indeed, metal lyrics with their frequent focus on grandeur, adventure, and mortality are heirs to the epic tradition, including the use of animal similes. Like Diomedes in Iliad 5, Spartan warriors are often compared to “wild lions seeking their prey, and “like raging lions they meet the enemy.” Gods like their ancestral Zeus and Heracles are invoked to intervene, but above all the berserker Ares.

Here we really see how Sparta is forged in a heavy metal mold. Historically, their chief gods were Athena and Apollo, reflections of the austerity, order, discipline, and strategy of their ways of life and war. Yet these aspects  are absent from metal songs on Sparta, wherein Ares represents the forces of chaos and irrational instincts unleashed to disrupt systems of order and control. Take for instance the opening of the German band Sacred Gate’s concept album on Thermopylae, Tides of War. It starts with a Euripidean prologue by Ares himself:

I have come set

the earth on fire

I am the one who shaped

taught you the art of war

Because ancient paganism was demonized by early Christians, Greek theology is easily substituted for metal’s traditional Satanic themes and imagery. Within heavy metal’s constructed religiouslandscape, Hell itself is glamorized as a utopia of sin and iconoclasm, in stark contrast to Heaven’s dystopia of spiritual slavery.

Other historical events also take on a religious symbolism. Xerxes’ invasion of Greece becomes analogous to foreign religions like Christianity coming to destroy Hellenic heritage. In keeping with such dichotomies several songs play upon the name of the battlefield (called either “Hot Gates” or “Gates of Fire”) as the gates of Hell itself. The Plutarchian apothegm “tonight we dine in Hell” (Apoph. 225d) often quoted in these songs sums up an eagerness to pass through this portal. Manilla Road represent the “Gates of Fire” as a flaming Valknut, a symbol of the Norse god Odin who guided fallen warriors, Viking and Spartan, to Valhalla. Other bands like Sacred Gate see the Spartans and Greece as symbolic of death and the underworld itself:

The Persians want to send us to Hell

But they don't know

We are already the Styx,

A river of blood

We are home now

In addition to servicing escapist tendencies and religious themes, Sparta’s use and abuse in metal, can also take on political dimensions––as it has elsewhere in our current age. Greek, European, and American bands not infrequently frame Thermopylae as a clash of civilizations, posing as the underdogs fighting to preserve their culture against a foreign “beast.” A minority of these artists have ties to far-right movements such as Greece’s Golden Dawn, which meets at Thermopylae annually with torches ablaze, while those in the ranks of National Socialist Black Metal glorify Sparta’s totalitarianism, xenophobia, and bogus “Dorian invasion” from Aryan lands. Extreme music can and does tend to attract extreme ideologues.

It is time to turn a critical eye to heavy metal laconophilia, which is going strong even 15 years after 300’s premiere.The metal romance with Spartais a phenomenon seen elsewhere in popular culture in political soundbytes, self-help books, and even Japanese anime. Historians Sarah Bond and Myke Cole have recently argued how the popular and political admiration of Sparta can be problematic, framed as a symptom of a society flirting with fascism: a militaristic city-state that sponsors eugenic infanticide along with the exploitation and terrorization of an underclass of non-citizen subjects, ought not be so glorified. The participation of scores of metal bands in the Sparta craze should not be divorced from these conversations about the modern (mis)appropriation of the Classics simply because it comes in lyrical form.

As classicists confront the legacy and persistence of racism and sexism in the academy, so too has the metal subculture undergone a similar reckoning. Historically dominated by a white male demographic, women, people of color, and the LGBTQ community are increasing in influence within the world of metal as artists, journalists, promoters, and fans. Classical themes are also shifting to reflect this newly expanded field. Narratives of marginalized women from antiquity such as Cassandra and Boudica have gained steam alongside revised views of conquerors like Alexander and Caesar. The continued reception of Sparta and worship of the tale of the 300 Spartans has not kept pace with these trends; however, as a counterculture defined by defiance and transgression, metal is well poised go beyond the Gates of Fire and perhaps one day invert the mainstream obsession with Sparta. As heavy metal has always sought to do, it can use music to instead expose moral and social failings, while also dispelling the mirage spartiate.

Header Image: Bronze statue of Leonidas erected at Thermopylae in 1955 (Photo by Andy Hay via Flickr under a CC-BY-2.0).

Jeremy Swist is a visiting assistant professor of Classics at Miami University. He writes on classical reception in heavy metal music for scholarly journals, the webzine Ride into Glory, and his Facebook page Heavy Metal and the Classical World. He also researches the reception of early Rome in the imperial period, Greek rhetoric in late antiquity, and the emperor Julian. You can reach him via email at swistjj@miamioh.edu, or Twitter at @MetalClassicist, and view his CV at https://heavymetalclassicist.home.blog/curriculum-vitae/

04/13/2022
Blog: Two Years Later: “Classics” after Coronavirus?
In an April 2020 post for Eidolon, I gathered predictions on “classics after coronavirus.” Two years later, it’s...
04/08/2022
Blog: Ancient Worlds, Modern Communities: Increasing Accessibility for the Study of the Ancient World
The Ancient Worlds, Modern Communities initiative (AnWoMoCo), launched by the SCS in 2019 as the Classics...
03/21/2022
Blog: I Love You, I Hate You: A Student’s Perspective on Learning Latin
I have always enjoyed Latin class because it felt like a puzzle, much like math. Find the verb, find the noun that...
03/18/2022
Blog: Power to Punish and Authority to Forgive: Imperial State and Imprisonment in 4th-Century Antioch
Research ideas often develop out of chance encounters or unplanned circumstances. My dissertation project was born...
03/14/2022
Blog: Sampling Epic in Kendrick Lamar’s “Mortal Man”
Because it’s spirits, we ain’t even really rappin’ We just letting our dead homies tell stories for us....
END_OF_DOCUMENT_TOKEN_TO_BE_REPLACED