Blog: The Polychromatic Landscapes of Greece: A Personal Reflection 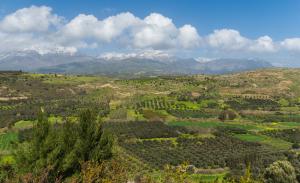 How do we reconstruct the color palette of antiquity? What role did plants and flora play in the creation of this polychromy world? In February 2017, I arrived in Greece for a four-month research stay, based at the American School of Classical Studies at Athens. Like many academics, I had experienced Greece only in the summer, and the image in my mind was one of bare, rocky, sun-scorched landscapes, punctuated primarily by olives and pines. In those first February days, I explored my local surroundings, walking up into the urban pine forest which is Mount Lykavittos, adjacent to the American School. I was stunned to find the Lykavittos blanketed in wildflowers, climbing over one another in a tangled rainbow of plant life. This immediately challenged my notions of the landscape, and of the color palette of Greece.

Even within the fertile Mediterranean, Greece is incredibly bio-diverse. In his 1993 Greek Wild Flowers and Plant Lore in Ancient Greece, Baumann noted that Greece is "floristically the richest country in Europe" (10). A study by the Botanischer Garten und Botanisches Museum Berlin-Dahlem and the Hellenic Botanical Society in Athens, completed in 2013, identified 5752 plant species in Greece, more than any other country in Europe. For those fortunate enough to walk through the fields, valleys, and into the mountains of Greece, especially during the peak flowering in Springtime, the chromatic effect of this biodiversity is spectacular. Fields of light pink asphodel, many-colored anemones, red poppies, purple thistles, and yellow puffs of giant fennel light up the landscape.


In February, the top of the Acropolis was covered with soft greenery and clusters of yellow wildflowers, setting off the white marble of the Caryatids, who carry the Erechtheion porch roof upon their basket-topped heads.

In antiquity, the Caryatids, like other Greek statues and monuments, would have been brightly painted. Several recent exhibits have represented the painted colors of ancient statues and monuments through light projections, display of painted reproductions alongside the originals, and accompanying illustrations. These exhibits typically take place within the white walls of museums. Marveling at the flowers, I could not help but wonder how the painted marbles of antiquity would have been activated by the colors in the landscape, as the vegetation and its colors changed over the course of the year, and how the polychromic effects of the landscape might be represented alongside reconstructions of ancient painted artifacts.

The colors of Greece in the Springtime continued to captivate me as I traveled outside of the urban centers. Later in February, Delphi was awash in pink flowering fruit trees. Pollen-footed bees scurried between yellow, white, and purple anemones. Looking back over the foundation of the Temple of Apollo, yellow wildflowers appeared in a broad swath down the slope of the site, this block of color set off by the sheer rock face of Mount Parnassus rising behind them.

In March, I embarked on an expedition to the Dodecanese with a fellow Classicist, Michele Asuni, who was similarly fascinated by the botanical life of Greece. On Samos, we heard of rare orchids in the mountains, but did not go in search of them. Still, flowers were often in our sights. After a day exploring Chios, our driver stopped to pick a bouquet in a field of red tulips, their petals glowing in the late afternoon light.

The experience of the modern landscape cannot be interpreted as a direct mirror of the ancient landscape. Many plants, now common in Greece, have been more recently introduced, including most varieties of palm, and the iconic bougainvillea, whose hot pink, orange, purple flowers cascade down the walls of many modern Greek houses. In order to truly understand what the ancient landscape was like, we must rely on colleagues who study the archaeo-botanical remains of ancient Greece, as well as ancient visual and textual records of plants. Still, this experience of Greece in the Springtime raised questions about my own preconceptions about the landscape, made me more attentive to the colors of Greece, in nature and artifact, and sparked curiosity about the ways in which seasonally changing colors might be represented.

Back in Athens, at the Acropolis Museum, I observed that curators were experimenting with several creative ways of representing both the colors of artifacts and also the natural surroundings of ancient monuments. In the main exhibit, painted reproductions of Archaic statues and illustrations of the colors of their richly patterned clothing found a place among the marbles. A special exhibit on Dodona, the site of a major sanctuary of Zeus in antiquity, included a video display which called attention to the visual and auditory experience of the site, including the sounds of rustling oak leaves.

The representation of the colors of antiquity is not new. In the dining room in ASCSA's Loring Hall hang magnificent watercolors of archaeological sites by Piet de Jong, who illustrated from the 1920s to the 1950s. Photography has largely replaced watercolor as a way of representing the colors of Greece, and digital technologies, such as 3-D reconstructions of ancient sites, and even video games, provide new platforms with which to explore these questions. In the newly released preview for the game Assassin's Creed Odyssey, a warrior runs through Mykonos, past brightly painted buildings. At her feet, pink and purple flowers cluster, marking this digitally imagined season as Springtime, 431 BCE.

I believe there is room for new and old technologies in the representation of the landscapes of Greece. Digital reconstructions of ancient sites depicting not only the monuments, but also the landscape in which they are situated, are an important step towards integrating knowledge of the many colors of the ancient world into representations of the ancient world. But there is another kind of knowledge which is gained through translating the visually perceived world to the page through drawing and painting, a slow, quiet observation of the land which such handwork requires. In September, I return to ASCSA for the Fall and Winter, two seasons which will be new to me in Greece. I am packing my watercolors.

Mali Skotheim is an Assistant Professor of English at Ashoka University in Sonipat, India. Her PhD thesis, completed at Princeton University in 2016, was titled, "The Greek Dramatic Festivals under the Roman Empire." She has been a Solmsen Fellow at the Institute for Research in the Humanities at the University of Wisconsin-Madison (2017-18), and a National Endowment for the Humanities Fellow at the American School for Classical Studies at Athens and the American Research Institute in Turkey (2018-19). During 2019-20, she was working on a project on the cultural and intellectual history of ancient pantomime dance at the Warburg Institute in London.

07/23/2021
Blog: “Can We Strangle the Muse?”: Carson and Bruno’s The Trojan Women
By Christopher Trinacty, Emma Glen, and Emily Hudson (Oberlin College) Anne Carson’s celebrated adaptations and...
07/12/2021
Blog: Contingent Faculty Series: A Conversation with Daniel Libatique
Our fifth interview in the Contingent Faculty Series is a virtual conversation between Dr. Taylor Coughlan and Dr...
07/06/2021
Blog: Six months in(surrection)
Today marks half a year since insurrectionists stormed the U.S. Capitol, occupied the Senate chamber, violently...
06/28/2021
Dissertation Spotlight: The “Oracular Tale” and the Oracles of the Greeks
Joseph Fontenrose’s The Delphic Oracle (1978) fundamentally reshaped how we think about Greek oracular divination...
06/24/2021
Blog: Ancient Worlds, Modern Communities: Connecting to the Ancient Greeks through Medicine, Sociology, Literature and Philosophy
The Ancient Worlds, Modern Communities initiative (AnWoMoCo), launched by the SCS in 2019 as the Classics...
END_OF_DOCUMENT_TOKEN_TO_BE_REPLACED