Blog: Whose Aeneid? Imperialism, Fascism, and the Politics of Reception 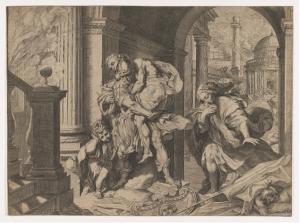 A few years ago, I read an essay by Elena Giusti in the now sadly defunct Eidolon. In this piece, Giusti considers the responsibilities of Classicists today, viewed from her perspective as a scholar of Italian origin based in the UK. Drawing attention to the use of Roman antiquity among the contemporary far-right in Italy, she goes on to state that,

No, it is simply not enough to remind readers that Aeneas was a migrant himself in this loaded climate of the migrant crisis (a recurrent reminder in the Italian press of late — counteracted, I now see, by the young alt-right journal Giovani a destra, whose claim to philological accuracy cares to stress, with Vergil, the Western origin of Dardanus).

This 21st-century contestation over the identity of Aeneas, the origins of Dardanus, founder of Troy, and what, if any, the responsibilities of Classicists confronted with such contestations are, piqued my interest.

At the time, I was working on my doctoral thesis on Italian imperial receptions, including Fascist receptions, of the Roman empire in Africa. Yet, until then, I had not thought very carefully about the still very alive, still very political re-shaping of the hero of the Aeneid. After briefly diving into the confusing, frightening, and saddening online world of the contemporary Italian far-right, I struggled to get a sense of how the multifarious Aeneases of the likes of Giovani a destra (Youth on the Right) and Il Primato Nazionale (National Supremacy, the publication of the neo-Fascist Casa Pound) fit into earlier, “historic” Fascist rearticulations of Vergil’s epic.

Central to this disjuncture between the Aeneid of historic Fascism and the Aeneid of the contemporary far right is the difference in how Italian nationalists positioned their politics in relation to the world outside Italy — in other words, how the nation related to the idea of empire. There clearly was a history to be told here, of how a core text of the classical canon could be reshaped to have so many different meanings, within the contexts of far-right political ideologies in the same country — Italy — but in different decades. This history illustrates how historical vicissitudes can have significant ramifications for the politics of classical reception, such that the Aeneas of Giovani a destra or Casa Pound should have more in common with that of a Renaissance pope than that of Mussolini. 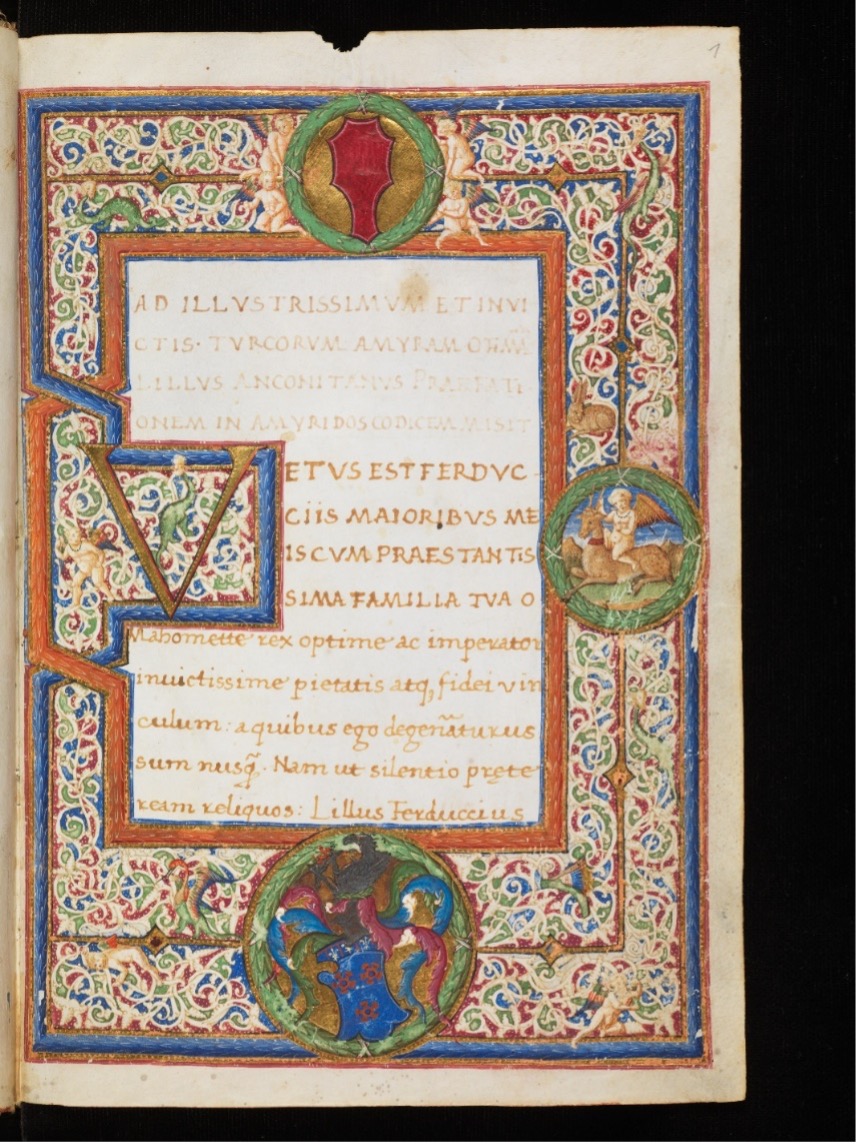 The use of the Aeneid by empires after Rome has been well discussed in scholarship. One of the imperial uses of the Aeneid — or, rather, the myth of the fall of Troy and the founding of Rome — that I find most fascinating is that of the Ottoman empire. In the pro-Ottoman, Venetian poet Gian Mario Filfelo’s 15th-century neo-Latin epic about the Ottoman sultan Mehmet II’s 1453 conquest of Constantinople, the Amyris (“Emir,” 1471–1476, fig. 2), the capture of the Byzantine capital is framed as vengeance for the Greek sack of the ‘Turkish’ city of Troy (Amyris III, 576). The episode is echoed in the Greek historian Michael Kritovoulos’s (c.1410–1470) History of Mehmet the Conqueror (IV.73). Laying claim to the empire founded by Troy’s descendants, Mehmet dubbed himself Qayser-i Rûm — Caesar of the Romans — after his conquest.

This example complicates the reception history of the Aeneid as initiating a tradition of epic framings of a clash between east and west, as identified in David Quint’s seminal Epic and Empire (1993). If epic belongs to the victors, typically the “West,” here, it is the “East” who has laid claim to epic. Not only this, the contestation over Aeneas — is he or is he not Turkish? is he or is he not a migrant? — that we see in recent Italian far-right discourse, was pre-empted in fifteenth-century discussions of the fall of Troy and the fall of Constantinople.

Pope Pius II (1405–1464) — coincidentally with the real name Enea, or Aeneas, Silvio Bartolomeo Piccolomini — wrote a Latin poem titled “In Maumethem perfidum Turchorum,” “Against perfidious Mehmet of the Turks.” In this, he writes (lines 11–12, translation mine):

This is not the race of Dardanus, its ancestors are not of Trojan blood.

They are barbarians and foul Scythians.

In the Giovani a destra article cited in Giusti’s Eidolon piece, Federica Ciampa also makes it clear that the Turks only arrived in the Anatolian peninsula in 1100 CE, whereas the Trojan War took place around 1200 BCE. However, according to Ciampa, Vergil tells us that Dardanus came originally from Tarquinia in Etruria, via Arcadia in Greece. Therefore, not only were the Trojans not Turkish, they were Italian, and so Aeneas’ journey to Italy was a sort of homecoming, not the flight of a refugee to a new home.

While there are resonances of Pius II’s repudiation of Ottoman claims to Trojan ancestry in Ciampa’s claims for Aeneas’ Italian blood, the Aeneid was used for markedly different reasons by historic Italian Fascism. In 1930, the bimillenary of Vergil’s birth was celebrated in Italy, an occasion studied by Luciano Canfora (“Fascismo e bimillenario della nascita di Virgilio,” 1985) and Tomasso Ricchieri (“Il poeta dell’Impero e dei campi, 2016) among others. At this time, the priorities of the Fascist regime lay in revitalising Italian agriculture, and it was Vergil’s Georgics and Eclogues that enjoyed pre-eminence over the Aeneid. However, the signs of the more overtly imperialistic uses of Vergil’s poetry which emerged later on in 1930s Italy, in the context of the run-up to Mussolini’s invasion of Abyssinia in 1935–1936, were already discernible.

The 1930 Christmas special issue of the mass-publication Illustrazione italiana was dedicated to Vergil’s bimillenary. In it, the Fascist senator and former minster for education Enrico Bodrero saw Vergil, along with Livy, as a key promoter of the Roman imperial ideal — an ideal framed around the clash between east and west. The article begins:

When the last Oriental resistance fell to the universal power of Rome, the new feeling of a global unity arose in the human spirit, as a truly practical, political, and civic reality, in which each inhabitant of the world saw come true what was, in various guises, the dream of a just peace, of humans collected under one law, one government, one common civilization.

What, precisely, this “last Oriental resistance” should be — Carthage, Pontus, Parthia? — is left unsaid. However, given the celebration of the Aeneid in the context of the Italian invasion of Libya in 1911–1912, and the significance of Dido’s city in Vergil’s epic, I would guess that Bodrero is referring to Carthage.

The vagueness of Bodrero’s east-versus-west narrative aside, what remains striking in his account of Vergil’s imperialism is the Roman poet’s apparent subordination of nation to empire:

Vergil adored imperial Rome, redeemer of the world, sacred city, creator and center of the unity of the human race, but also adored his homeland, Italy, and assigns it a role in the team of empire, affirming its [empire’s] superiority.

This is, I think, central to the differences between 1930s Fascism’s and the contemporary Italian far-right’s reading of Aeneas and the Aeneid. Fascism of the 1930s was flush with success. Mussolini had strengthened his grip on Italian politics, having come to power in 1922 and become dictator in 1925. He had formed a vital alliance with the Vatican in 1929, had met with moderate success in his drive to bolster agricultural productivity, and was coming to the conclusion of a brutal and genocidal campaign of counterinsurgency against the Senussi confederacy in Libya, which began in 1923 and culminated with the execution of the Senussi leader Omar al-Mukhtar in 1931.

With Fascist power consolidated at home and in Italy’s existing colonies, Mussolini could now think bigger. Empire-building was placed firmly on the agenda. Roman imperialism, with the Aeneid as its epic, was elevated to the status of a national ideology, culminating in Mussolini’s proclamation of the refoundation of empire in 1936, and the exhibition celebrating the bimillenary of Augustus in 1937–1938. Fascism became too big for the nation and would instead become an ideology of empire.

Compare this triumphalism with the uses of the Aeneid by the Italian right today, and indeed by Pope Pius II. In 1453, the Muslim armies of Mehmet the conqueror took the millennium-old capital of the eastern Roman, then Byzantine, empire (notwithstanding the brief interlude of the Fourth Crusade). The disunity among Christian rulers saw the Ottomans take the initiative and, in the coming centuries, would see the Turks advancing right up to the walls of Vienna. Europe was under attack from the Islamic invader.

We see a similarity in this situation and in the discourse of the xenophobic right in Europe today. The Mediterranean can no longer be a focal point for an expansionist European imperialism, as it was under Mussolini’s Fascism, but a barrier between the Christian, European Self and the Muslim, foreign Other, as it was during the wars between the Holy League and the Ottoman empire.

What, then, to do with that famous migrant from the east to Italy, the legendary founder of Rome, Prince Aeneas of Troy? Simple — he was always an Italian!

Sam Agbamu teaches Latin and Classics at a sixth form college in Cambridge, UK. From January 2022, he will be a Leverhulme Early Career Fellow in Classics at Royal Holloway, University of London, working on “race” in Petrarch’s Africa. His research interests include Latin epic and imperialism, as well as the relationship between the classical tradition, colonialism, and racism. He gained his Ph.D. in Classics from King’s College London in 2019.

07/01/2022
Blog: Ancient Worlds, Modern Communities: Contemporary Responses to Greek Myth and Tragedy through Drama, Film, and Visual Art
The Ancient Worlds, Modern Communities initiative (AnWoMoCo), launched by the SCS in 2019 as the Classics...
06/29/2022
Blog: “Deeply rooted in history”: Teaching abortion ancient and modern in a post-Roe v. Wade world
With weary hearts, we consider with you what Classics can do in the face of Dobbs v. Jackson Women’s Health...
06/27/2022
Blog: Teaching in a Time of Anti-Asian Violence: Reflections on Asian & Asian American Experiences in Classical Studies, Part 1
This two-part series reflects upon AAPI experiences in Classical Studies. Part 1 is catalyzed by the author’s...
06/25/2022
Blog: Roe v. Wade, the GOP, and echoes of Augustus: Reproducing fascism
I guess I should say “thank you.” Gratias vobis ago. Thank you to the Republican Party’s long game, a partisan...
06/20/2022
Blog: Paternalism and the “Good Slave” in the Speech for Phormion and the Legacies of Slavery
In a discussion of the concept of the “good slave” in her book Reconstructing the Slave: The Image of the Slave in...
END_OF_DOCUMENT_TOKEN_TO_BE_REPLACED