But which ancient tales are best for children to hear? In the first century CE, Quintilian laid out the literature for school-age children to be educated with, encouraging the reading and copying of Homer, dramatic texts, and Aesop’s fables. Aesop’s tales were in fact the next step after the fables first told to them in their nurseries. For parents who want to share a love of antiquity with their children today, there are an increasing number of books written in Latin, reworking classical literature, or focused on teaching Greco-Roman mythology to a younger audience. Today I hope to touch on just a few you may wish to read with the children in your life or just enjoy on your own. 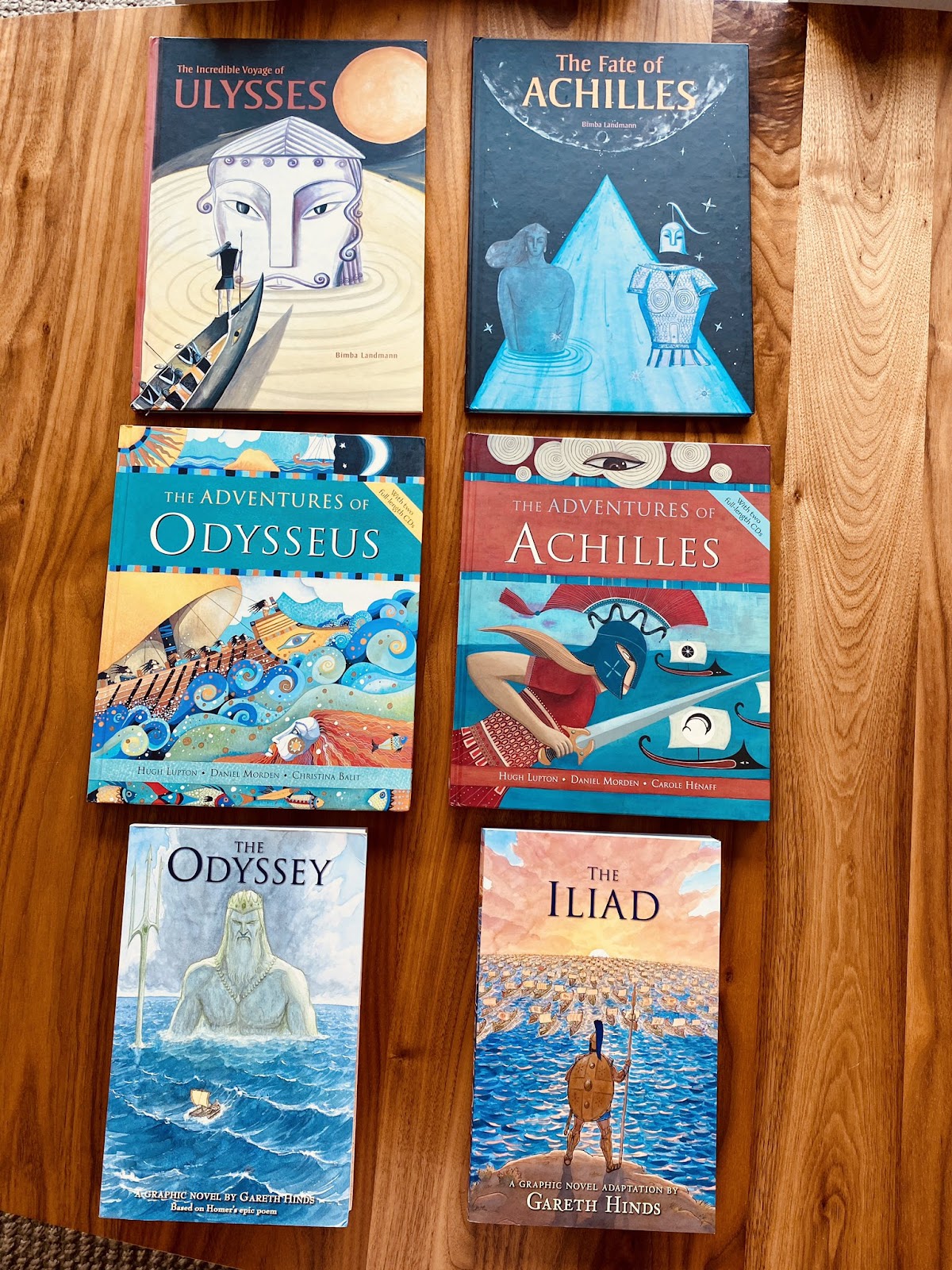 Figure 2: Homerist and Classics Professor at University of Houston Casey Dué Hackney has numerous books focused on Homeric Greece that she read to her children.

One of the most popular ways to experience the ancient world with children is through language. A number of Latin books aimed at a younger audience from infancy to young adult has come on the market in the past decade. Nadejda Williams, Professor of History at the University of Western Georgia, sent us Adams’ Odyssey along with a number of others written both in English and in Latin. In speaking with Prof. Williams, she noted a few other works of interest ranging from Suess to Sendak:

We've been highly impressed with Bolchazy Carducci kid Latin books. They have published a bunch of kid classics in Latin -- Ubi Fera Sunt (Where the Wild Things Are), and also the Latin translation of some Dr. Seuss books -- How the Grinch Stole Christmas, Cattus Petasatus (the Cat in the Hat), and my kids' absolute favorite -- Virent Ova! Viret Perna! (Green Eggs & Ham). But while BC seems to have really put a lot of effort into publishing Latin books for kids of all ages, there are other great translations out there as well -- such as Ferdinandus Taurus (Ferdinand the Bull).

I was aware of the existence of more advanced Latin books for young adults, particularly the Latin translations of Harrius Potter (Harry Potter) and Hobbitus Ille (The Hobbit), but it has been intriguing to see how many Latin books there are targeted at babies as well. I will admit that I cannot wait for the day when I can read her Tela Charlottae (Charlotte’s Web) and then tell her that the name of the spider in E.B. White’s original really was Charlotte A. Cavatica––after the scientific name for a barn spider, the Araneus cavaticus. I highly doubt she will ever embrace my penchant for random facts and etymologies, which means I will surely embarrass her well into her teenage years (and beyond). 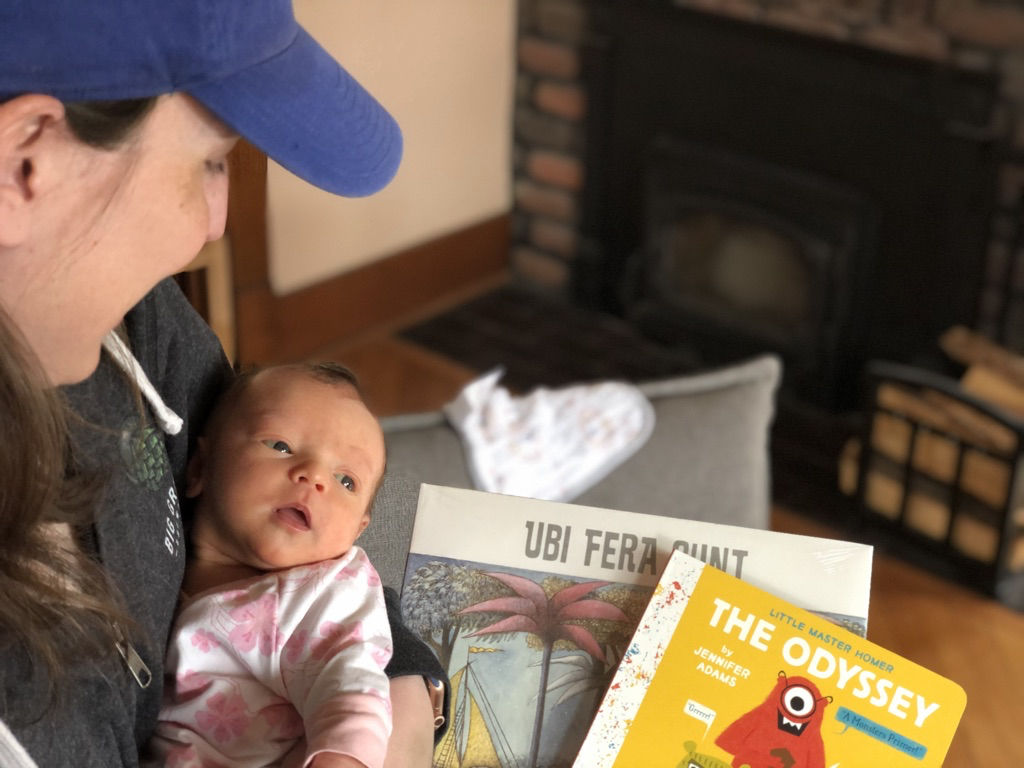 Perhaps one of the most well known books for babies and toddlers is the BabyLit series, which includes Jennifer Adams’ version of The Odyssey. Although I am still dubious about how to make Anna Karenina infant- friendly (not to mention their reworking of Les Miserables), these board books are meant to introduce literary tomes to a younger audience. Many of the children’s books focused on the ancient world are child-appropriate reworkings of classical texts that do indeed remake a text for a different audience. Homer seems to be an incredibly popular author for this approach––just as he was in antiquity. 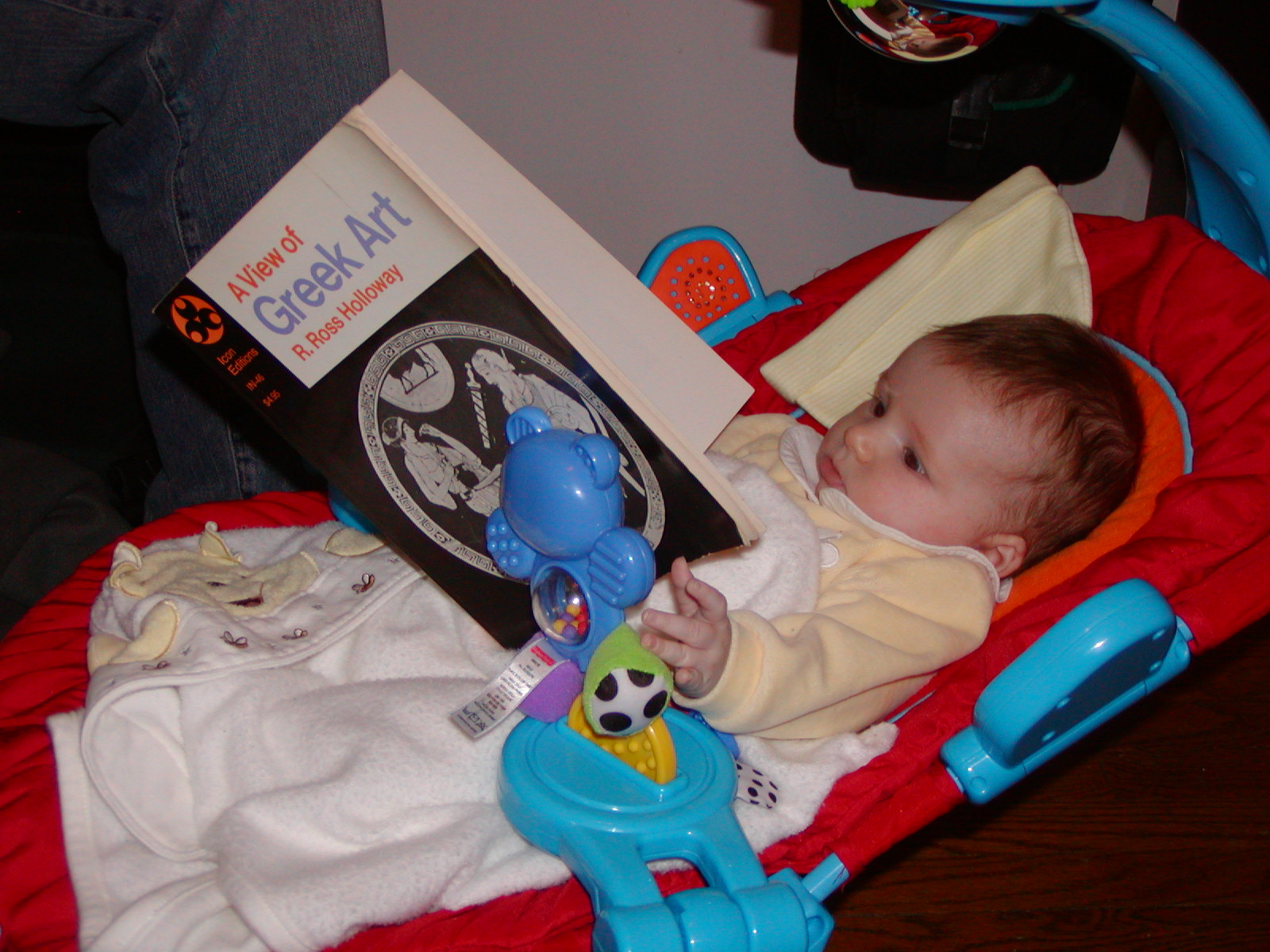 Greco-Roman mythology is a favorite topic for children’s books marketed at all ages. Arum Park, Assistant Professor of Classics at the University of Arizona, and Young Kim, Associate Professor of Classics and History at the University of Illinois-Chicago, both read d'Aulaires' Greek Myths and Norse Myths to their children. Park’s oldest has also read Mary Pope Osborne's adaptations of the Odyssey, all the Percy Jackson books and is working through the other Rick Riordan series, though, as she notes, “Riordan's books are not focused on antiquity exactly since they are set in modernity.” Laura Nasrallah, Professor of New Testament Criticism and Interpretation at Yale, seconds the Riordan reading: “Once the kids were old enough to have me read or to read themselves the Percy Jackson series, they talked about the Gods a lot.” And as many have pointed to, myths are often a good jumping off point for talking about human issues such as ethics, anger, war, love, and even gender. It is just one reason I have enjoyed reading aloud classicist Yung In Chae’s new book Goddess Power, which focuses on the remarkable women of Greek and Roman mythology. 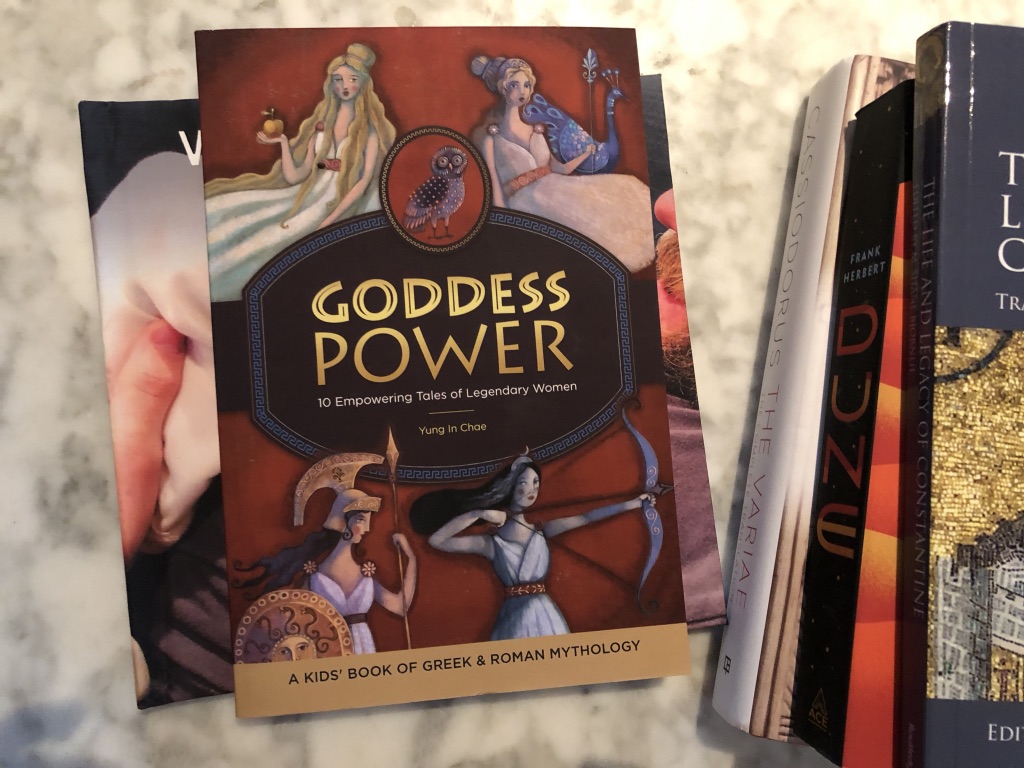 For those who favor the quotidian over the divine, there is also Caroline Lawrence’s popular Roman Mysteries series for middle school aged kids and beyond, which is deeply researched and written in an engaging style that takes readers on detective stories through the streets of Pompeii or the Temple of Mithras. Older children and adults of all ages may also engage with the growing number of graphic novel versions of classical stories as well. This of course includes Biblical tales from the Hebrew Bible, New Testament, and early Christianity. Emily Wilson, Professor of Classical Studies at the University of Pennsylvania, suggests Doug Mauss’ The Action Bible.  For those with a love of Late Antiquity, there is even a children’s book on Hypatia called Of Numbers and Stars. No matter the time period or geographic region, it seems there are ways to start children learning early about the art, archaeology, and texts from the ancient Mediterranean. Figure 6: A few of the graphic novels focused on antiquity suggested by Homerist Emily Wilson.

Many Classicists may choose not to impose their love of the ancient world on their children through books. And this is a viable route too. I have spoken to more than one academic who has told their children that they can be anything they want––except a professor. As Sarah Scullin, classicist and managing editor of Eidolon notes, we should allow our children their own interests and respond to their passions by encouraging them to go in their own directions:

We do have several kids books in other languages (for example, a modern Greek rendition of Eric Carle's From Head To Toe that Jason [Nethercut] picked up in Greece as a souvenir for our oldest, but we just translate those when the kids want to read them and don't exoticize the language. I'm much more focused on finding out what interests my children than I am in forcing my interests onto them and so far they really really aren't interested in antiquity.

If parents do choose to read Classics books with their children, the selection certainly seems to be growing. When I asked Classics Twitter what their favorite children’s books were, I got dozens of splendid answers that cannot all be listed here, but which you should check out. Please feel free to add to this thread as we begin to compile a broader list and then organize them according to age. For those who love the ancient world, children's classics books can certainly be a gateway to encouraging a love of antiquity, but in reality, it may just be another method for connecting to the little ones in our lives through the most human of means: fantastic stories. 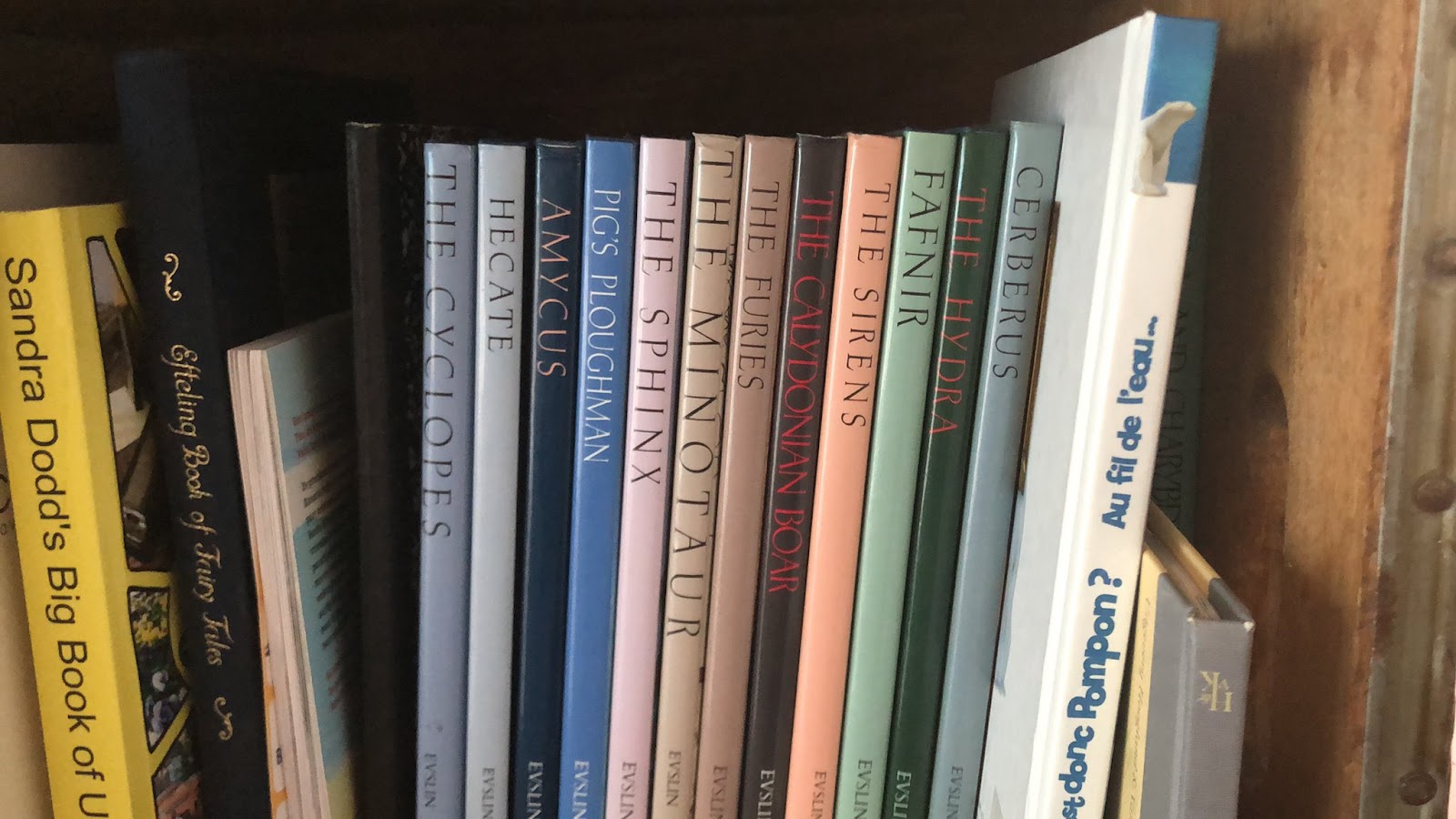 Figure 7: A shelfie from Jason Nethercut, Assistant Professor of Classics at USF, and Sarah Scullin’s, Classicist and Managing Editor of Eidolon, home bookshelf. Although they have numerous Classics books for children, they are committed to letting their children choose their own adventure.

07/31/2020
Review: The Duolingo Latin Course
After many years of offering free language courses to students of popular modern languages such as French, Spanish...
07/22/2020
Blog: Classics Everywhere: Recreating Ancient Drama for the Modern (and Digital) Stage
The new Classics Everywhere initiative, launched by the SCS in 2019, supports projects that seek to...
07/17/2020
Blog: Using Rhetoric and Public Speaking to Revive Classics
Fighting racism, or any wicked, wrongheaded, or simply false idea, demands persuasion, person to person. All non-...
07/10/2020
Blog: What Parts of Classics Would We Choose To Preserve for the Future?
In light of the present administration’s brazen disregard for facts and the public good, you’ve got to admire past...
07/03/2020
Blog: What Are the Best Classics Books for Children?
Finishing my third trimester in the midst of a pandemic was not what I had planned for the last months of...
END_OF_DOCUMENT_TOKEN_TO_BE_REPLACED