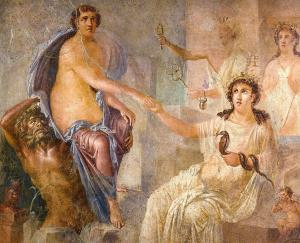 This month, we spotlight the graduate research of Dr. Vivian A. Laughlin, who recently defended her dissertation on the Roman imperial appropriation of Serapis this spring.

While excavating at Hadrian’s Villa in 2015 with Columbia University I noticed that there were various architectural designs and material culture that appeared to be influenced by Egyptian culture. Then when roaming through various parts of the city of Rome, I began to see similar aesthetic references to Egyptian iconography in many places from Augustus’ House on the Palatine to Roman imperial works within various museums throughout the city. I questioned the Egyptian iconography I saw and why the visual references were being made. The more I questioned it, the more it created a burgeoning reason to investigate further and to better understand the relationship between Rome and Egypt. It was almost as if the material culture was speaking to my soul.

This interest in Egyptianized elements in Rome led me to my dissertation on The Appropriation of the Hellenistic-Egyptian Cult of Serapis: A Multi-Disciplinary Study Focusing on Augustus, Nero, Hadrian, Their Coinage, and Villas, which demonstrates when Augustus conquered Egypt and became a pharaoh, he absorbed not only Egyptian land and its resources, but also its religious identity. However, because of his disdain for Cleopatra and Rome’s disdain for all things Egyptian, he appropriated subtle Egyptian iconography stemming from the Hellenistic-Egyptian cult of Serapis into the political sphere from his domus and coinage. However, when going into the background of the study, I introduce that Augustus emulated his appropriation tactics from Ptolemy I. Through the historiography and analysis of Ptolemaic material culture, I reconstruct the story of the Ptolemaic empire; one which appropriated the cult of Serapis long before Augustus did. 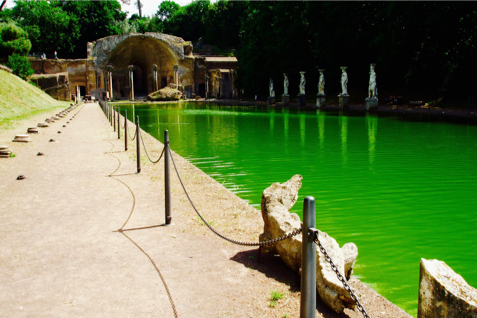 Figure 1: Canopus and Serapeum at Hadrian's Villa (Image by Vivian A. Laughlin).

By combining the Greek and Egyptian religions and ideologies, and fusing Osiris with Apis, who became a supreme deity of the Egyptian pantheon, Serapis was created. I use the term “created” loosely, as it was a misnomer that Ptolemy I created the cult of Serapis. In actuality, he renamed an ancient Egyptian cult, originally referred to as Wsir-Hp, the Osirified Apis bull. The Osirified Apis bull had already been worshipped widely in ancient Egypt, as its temple was housed in Memphis. It was also worshipped in various Greek and Persian provinces (e.g., Soros and Babylonia).

However, Ptolemy I appropriated the Hellenistic-Egyptian pantheon cult in such a manner where interpretatio Graeca was utilized. Wherein, a Greek was able to recognize Athena in Isis, Dionysus in Osiris, and the Egyptians were similarly able to recognize their gods. The seemingly opposite cultures realized their gods were similar in many aspects and even the same in others. The dualistic nature that stemmed from the fusion of two deities (Osiris and Apis) assisted with understanding the poly-interpretable affect that was sequential to all the deities. The poly-interpretable affect made it an easy matter to worship, what ended up to be, a syncretic order of deities, regardless of their original cultural origins. The cult of Serapis was the apogee of this idea. Its creation melded the two cultures, the Greek-Macedonian and Egyptian, by melding their gods.

The interpretatio Graeca utilized within the Hellenistic-Egyptian cult of Serapis produced a paradigm for Roman imperialism to apply its agency in the same manner as the Ptolemaic Empire. Wherein, Augustus implemented into the Hellenistic-Egyptian cult of Serapis the Roman gods, their philosophies, and replaced Serapis with Isis. In doing so, the pax deorum, (“peace of the gods”), was expanded to essentially all the gods, not just the Roman gods. Despite the affectation of disdain for eastern habits and peoples, Augustus used a lot Egyptian iconography and motifs throughout his house, as did his wife, Livia. Many of these decorative forms created hybrid forms that were used within both the political and religious sphere that were later emulated by emperors in succession. For example, in Figure 1, there are examples of the three variations of the lotus flower used within Augustus’ house on the Palatine Hill in Rome. These lotus flower variations were later reused by various Julio-Claudian emperors in succession, namely, Nero. Nero used lotus flowers and various other Serapian motifs throughout his palace to decorate. 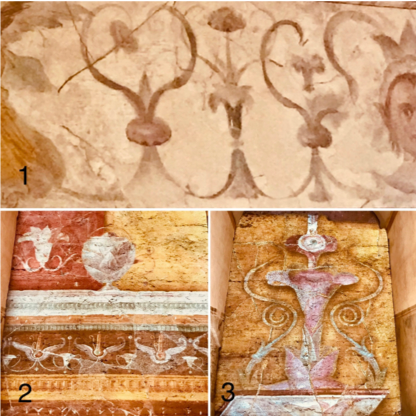 Research on syncretism, reception, and reuse like this is important in the field of Classics because little is known about the cult of Serapis and its deeply embedded Egyptian roots. A few historians have done work on the cults of Isis and Serapis in Rome, but little to no archaeological work has been done to connect the Egyptian iconography that had previously been dismissively identified as “imperial”, “exotic”, or “binary” art forms done in a very generalized way. I am thankful to great scholars like, Sarolta Takács, Molly Swetnam-Burland, Dorothy Thompson, and Ronald Mellor (just to name a few) who set the ground work for junior scholars like myself to elaborate on their foundations, I was able to put together aspects of the cult of Serapis that had not previously been done before.

Over the course of writing the dissertation, the project morphed substantially to become what it is today. Dissertators should realize that any project will change greatly between the prospectus and defense stages of their work. As I began to delve deeper into my research, the scope changed dramatically as I realized these were not just portions of Egyptian iconography used in a very generalized or imperial artistic form. They were instead derived from the Hellenistic-Egyptian cult of Serapis, which meant these iconographic languages had meaning and intent. Initially, I was told I wouldn’t find much, so my chronological scope was broad. I wanted to cover all Roman emperors up to about 230 CE. However, the historiography, numismatics, and material culture from the imperial villas alone were abundant. I was forced to narrow my focus for because there was in actuality far more evidence than we have previously known. It is my hope to revisit these other areas in the future in order to show how the cult was appropriated in other times and spaces within the Roman Mediterranean. In doing so, I believe we would have a better understanding of the role of sacerdotalism (i.e., emperors and priests having been viewed as divine beings) and the importance of the pax deorum not just as a ritual but as a living god member.

What are you planning to do next?

What would you suggest the field of Classics change about itself?

Classics and Ancient Near Eastern areas of the field of archaeology need each other. My dissertation research is evidence of this. I recognized from my research how the two overlap, and consequently, it would be great if the two interacted with each other more frequently. While varying categories of our research can be radically different, there are some aspects where the two fields intersect, especially with iconography and architecture from the West of the Mediterranean in the East, and vice versa . It is my hope my research helps to bridge this gap and to welcome more dialogue between two fields that have much more in common than many realize.

Header Image: The goddess Isis (seated right) welcoming the Greek heroine Io into Egypt, as depicted in a Roman wall painting from Pompeii (Image via Wikimedia).

Vivian A. Laughlin graduated in May of 2019 with a Ph.D. in Ancient Near Eastern Archaeology and Anthropology and a cognate in Early Church History from Andrews University. Her research and education focused on Hellenistic and Roman culture (300 BCE-300 CE). She specialized in ancient near eastern peoples, ethnohistory, ethnoarchaeology, ancient religions, and ancient Roman architecture. In the Fall of 2019, Vivian will move to Jerusalem as a Fulbright Postdoctoral Fellow in order to pursue her research project, titled “Serapis and Isis in Ancient Judea and Palestine” at Hebrew University of Jerusalem in Israel. This research will continue her dissertation’s examination of Roman emperors’ acquisition of religious and imperial influence through the appropriation of various Egyptian deities, specifically Serapis and Isis. Please feel free to follow her on Facebook, Twitter, and Instagram @VivianLaughlin.

04/13/2022
Blog: Two Years Later: “Classics” after Coronavirus?
In an April 2020 post for Eidolon, I gathered predictions on “classics after coronavirus.” Two years later, it’s...
04/08/2022
Blog: Ancient Worlds, Modern Communities: Increasing Accessibility for the Study of the Ancient World
The Ancient Worlds, Modern Communities initiative (AnWoMoCo), launched by the SCS in 2019 as the Classics...
03/21/2022
Blog: I Love You, I Hate You: A Student’s Perspective on Learning Latin
I have always enjoyed Latin class because it felt like a puzzle, much like math. Find the verb, find the noun that...
03/18/2022
Blog: Power to Punish and Authority to Forgive: Imperial State and Imprisonment in 4th-Century Antioch
Research ideas often develop out of chance encounters or unplanned circumstances. My dissertation project was born...
03/14/2022
Blog: Sampling Epic in Kendrick Lamar’s “Mortal Man”
Because it’s spirits, we ain’t even really rappin’ We just letting our dead homies tell stories for us....
END_OF_DOCUMENT_TOKEN_TO_BE_REPLACED