The Board of Directors of the Society for Classical Studies strongly supports all the faculty, including all non-tenure track faculty, and students in the Department of Classics. The SCS Classics Advisory Service will continue to make itself available to all at Howard in order to advise and support the department, its programs, students, and all faculty.

Anton Powell (Classical Press of Wales) and Nandini Pandey (University of Wisconsin-Madison) invite proposals for papers (of 35 minutes each) on coinage as contemporary evidence for the Roman revolutionary age (49 BC - AD 14). It is hoped that papers will serve, collectively, to show the diversity of personal and factional approaches to warfare, politics and ideals over this period of over 60 years. In particular, the choice of ideals advertised on coins may, it is hoped, serve to characterize not only warlords and factions, but the desires, expectations and fears of the wider populations to which these messages in metal were directed. The organizers of the panel believe that contemporary coins form a uniquely rich, but undervalued, source for mentalities over the period. Far more thoroughly than literature after 43 BC, coins of Republican inspiration escaped the retrospective viewpoints of the Augustan regime. Seen in their diversity, the coins – eminently forward-looking in their themes – variously challenge and illuminate narratives of an inevitable rise of Julian rule. Here were numerous individuals and groups who still saw other possible outcomes. And their views, however ephemeral, help to explain how the faction that was ultimately victorious contrived the policies and propaganda that it did.

In Summer 2016 the Latin/Greek Institute will once again offer highly intensive ten-week Basic programs in Latin and Greek, which cover more than four semesters of work in a single summer (June 6-August 16, 2016).  The Institute will also offer a seven-week Upper Level program in Latin (June 6-July 26, 2016). All classes are team-taught, and faculty are available by phone around the clock to assist students.

The Upper Level Latin program offers qualified students the opportunity to read a substantial body of literature (200 or more lines per night) at a high level of grammatical precision. The first week is devoted to a systematic review of morphology and syntax; the remaining six weeks are spent in a close reading of selections of the following texts: Suetonius, Caligula; Tacitus, Annales 4-6, 14-16; Lucretius, De Rerum Natura, 1 and 5; Seneca, Thyestes (complete). The course carries 8 undergraduate credits at Brooklyn College.

Thanks to generous continued funding from the Elios Charitable Foundation and additional funding from the Tsakopoulos Hellenic Foundation, the University Library at California State University, Sacramento is pleased to announce the continuation of the Library Research Fellowship Program to support the use of the Tsakopoulos Hellenic Collection by fellows for scholarly research in Hellenic studies while in residence in Sacramento. The Program provides a limited number of fellowships ranging from $1,000 to $4,000 to help offset transportation and living expenses incurred during the tenure of the awards and is open to external researchers anywhere in the world at the doctoral through senior scholar levels (including independent scholars) working in fields encompassed by the Collection’s strengths who reside outside a 75-mile radius of Sacramento. The term of fellowships can vary between two weeks and three months, depending on the nature of the research, and for the current cycle will be tenable from July 1, 2016-June 30, 2017. The fellowship application deadline is February 26, 2016. No late applications will be considered.

CFP: Voyages and Journeys in Antiquity

The communities of the ancient Mediterranean may seem, in comparison with our modern, globalized society, somewhat less reliant on the close cultural and economic ties that we take for granted. Yet, from Homer to Virgil, from Herodotus to Julius Caesar, from the Greek colonization of Southern Italy to the campaigns of Alexander, we are constantly reminded of the vital interchange of ideas and materials that took place between ancient cultures. This conference aims to explore the role of travel in creating and maintaining these connections, whether in the spheres of archaeology, economics, philosophy or literature.

We thus invite submissions for papers related to the theme of travel in the ancient world. Relevant issues for discussion may include (but are certainly not limited to):

The origins of western science and philosophy are customarily traced to 6th century B.C.E. Ionia, to Thales of Miletos and the school he founded, whose famous pupils included not only the Milesians Anaximander and Anaximenes, but also Pythagoras of Samos, Bias of Priene, Xenophanes of Kolophon, and Herakleitos of Ephesos among others.  Our conference seeks to identify the defining marks of this new scientific and philosophical tradition, to compare and contrast them, and in light of them to explore what kinds of knowledge formed the background against which these new origins represent a meaningful departure. What counted as ‘knowledge’, ‘wisdom’, ‘truth’ and ‘fallacy’ in Archaic Greece?  This background includes ‒ but is not limited to ‒ ‘knowledge’ in crafts, politics, architecture and building, military, agriculture, and of course, religion.

Our conference and the anticipated volume of essays we hope to publish proposes to address the preconditions of this historical phenomenon, as well as its development until the Early Classical era, the beginning 5th century B.C.E. Why did it take place in Ionia, and not in Sparta, or Corinth, or Athens? What role(s) did the oriental cultures play in developing disciplines like cosmology, astronomy, geometry, cartography? How did the Ionians develop their methods of scientific thought? And how did they teach, preserve and disseminate their new knowledge?

How to Do Things With Millions of Words

Mark Vessey, Edward Slingerland, and Stephen Wittek are organizing an intensive two-day conference/meditation on the theoretical and technical challenges pertaining to macro-scale textual analysis, to be held at at the University of British Columbia. How to Do Things With Millions of Words will bring together an interdisciplinary group of researchers at all levels of technical experience. The list of contributors already slated to join includes Ted Underwood (University of Illinois), Paul Yachnin (McGill), Ray Siemens (UVIC), Edward Slingerland (UBC), and Stéfan Sinclair (McGill). For more information, and to download the full CfP see http://earlymodernconversions.com/how-to-do-things-with-millions-of-word... 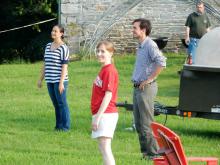 The Conventiculum Dickinsoniense is an immersion seminar in active Latin. It is specifically designed for all cultivators of Latin who wish to gain some ability to express themselves ex-tempore in correct Latin. A wide range of people can benefit from the seminar: professors in universities, teachers in secondary schools, graduate students, undergraduates, and other lovers of Latin, provided that anyone who considers applying has a solid understanding of the grammatical essentials of the Latin language. A minimum requirement for participation is knowledge of Latin grammar and the ability to read a Latin text of average complexity, even if using a dictionary often.  But no previous experience in speaking Latin is necessary. Sessions will be aimed at helping participants to increase their ability to use Latin effectively in spoken discourse and to understand others speaking in Latin. After the first evening reception (in which any language may be spoken), Latin will be the language used throughout the seminar.

The Dickinson Summer Latin Workshops are intended for teachers of Latin, as a way to refresh the mind through study of an extended Latin text, and to share experiences and ideas with Latinists and teachers. Sometimes those who are not currently engaged in teaching have participated as well, including retired teachers and those working towards teacher certification.
Moderators:  Rob Hardy (Carleton College) and Christopher Francese (Dickinson College),
The text for 2016 will be selections from Bede’s Ecclesiastical History of the English People. Bede wrote in simple but nuanced Latin a history of the Christian Churches in England, and of England generally. His history, completed around 731, is the foundation of our knowledge of the early history of England, and contains many fascinating stories. Participants must have a firm grasp of the basics of Latin grammar and a solid working vocabulary. But we aim at a mixture of levels and experience.
View full article. | Posted in Summer Programs on Wed, 01/20/2016 - 2:20am by .

The UCLA Department of Classics is pleased to announce the third and final year of a grant by the Andrew W. Mellon Foundation to support the preparation and training of young scholars in post-classical Latin for graduate programs in Medieval and Renaissance Studies.

The post-baccalaureate program in post-classical Latin is intended for students who have completed B.A. degrees and who are intending to pursue Ph.D. programs requiring study and proficiency in late Latin texts and documents. A cohort of four or five students will be chosen by a faculty subcommittee. All university fees and a stipend of $18,000 will be provided to allow the admitted students to spend a year at UCLA participating in the post- classical Latin curriculum as well as taking existing courses in Classical Latin and, more broadly, in undergraduate and graduate courses in Medieval and Renaissance Studies related to their research interests. Participating departments include English, Art History, History, Italian, Philosophy, French and Francophone Studies, and Near Eastern Languages and Cultures.

The program offers a pro-seminar in the Fall Quarter to introduce students to UCLA faculty and to prepare them for successful applications to top-ranked Ph.D. programs.  Students interested in the post-baccalaureate program should submit the following:

The Classical Association of the Pacific Northwest (CAPN) invites papers on any aspect of Graeco-Roman antiquity.  Especially welcome are papers that are likely to be of broad interest and make connections among the different elements of the ancient world. Such connections can be between Greek society and Roman society, between different disciplines such as literature and history, or between different genres of literature. Teachers and students of the Classics at any level of instruction (K-12, college, or university) may submit abstracts; all papers will be judged anonymously by the Program Committee, chaired by CAPN President Ulrike Krotscheck. Abstracts of no more than 300 words should be submitted by email to ulrikek@evergreen.edu. The extended deadline for submissions is January 31, 2016. You should receive a response by mid-February.  Presented conference papers should be no more than 20 minutes in length.