Throughout her long and distinguished career, Dr. Benjamin received a number of honors for her scholarly work. She was twice a Visiting Scholar at the Institute for Advanced Study (Princeton, NJ).  In 1972 she was appointed Editor of Archeology (A.I.A.) for a five year term.  She devoted her considerable skills to expanding the content and breadth of the journal.  In that era the editor was unpaid, but for Dr. Benjamin serving as editor was a labor of love for a field to which she was wholly committed.

Professor Benjamin was a member of the APA Board of Directors from 1973 to 1976 and served the APA in several other capacities as well.  In 1979 she was inducted as a Fellow of the Society of Antiquaries of London, and in 1994 she received the Martha & Artemis Joukowsky Distinguished Service Award from the Archeological Institute of America.  Those two honors recognizing her contributions to both the fields of Classics and Archeology were particularly important to her as they reflected her life’s work.

She is survived by her nieces, Lydia Parke and Janet Boosz. 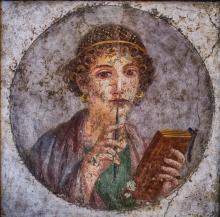 The Ausonius Institute (CNRS – Université Bordeaux Montaigne), under the patronage of the  Académie des Inscriptions et Belles-Lettres (AIBL, Paris), the International Association of Greek and Latin Epigraphy (AIEGL) and the Société Française d'études épigraphiques sur Rome et le monde romain is pleased to invite you to the 16th International Congress of Greek and Latin Epigraphy, which will take place in Bordeaux  from August 29 to September 2, 2022.

The aim of the conference is to reflect on the situation of epigraphy and the role of the epigrapher in the 21st century. The congress will, therefore, be organized around thematic, chronological or geographical reports, which will allow us to assess advances in our knowledge with regards to methodological, technical or ethical issues that occur in contemporary epigraphic studies. Particular attention will be paid to new epigraphic perspectives made possible by the development of digital humanities.

You can find more information on the conference website here: https://ciegl2022.sciencesconf.org/